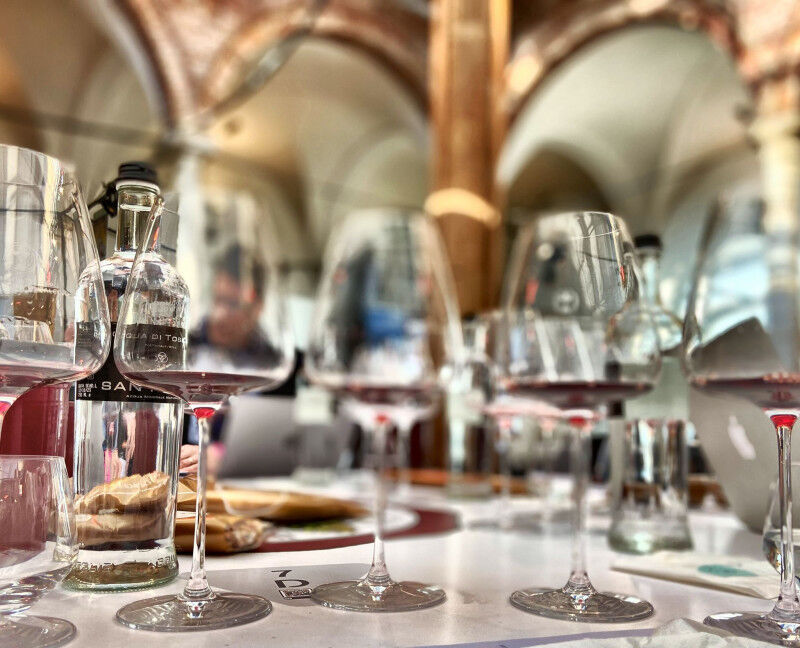 Benvenuto Brunello 2021. The preview of the restart, once again in-person and… Brunello 2016

We received plenty of messages and phone calls recently, all intended to find out what to expect from the 2017 vintage, coming on the heels of a superlative 2016 vintage.  We know by now that the 2015 vintage was sweet and abundant, including the Brunello di Montalcino Riserva.  This vintage is nearly sold out with more than 10 million bottles having been snatched up by avid buyers.

We also know that 2016 represented a true classic in terms of quality and demand, reflected by the near sold-out status of 8.6 million bottles already purchased by aficionados and collectors alike.  What made that vintage so special?  Of course, it was already a terrific vintage on its own, but when you include its stunning ageing potential, the 2016 vintage faces little competition in terms of accessibility and quality.

Which brings us to the 30th edition of Benvento Brunello, held on November 19th.  The 10-day long event was hosted where?  The Montalcino historic wine-producing area, naturally.  During this Benvenuto Brunello edition, the new 2017 was up for review.  How did it fare?  Keep reading below for more tantalizing tidbits.

The presentation of the 2017 Brunello di Montalcino has posed a true novelty within the world of Tuscan fine wines.  Generally speaking, the 2017 vintage of Brunello would have been introduced alongside the other Tuscan DOCG selections, throughout the entire nation.

The Benvenuto Brunello November release however represents the first time an Italian wine is being released before its official market entry.  According to standard law, Brunello is generally set to appear on January 1st of the fifth year following the wine’s harvest period, so in this case, January 1st, 2022.

The decision to move ahead quickly comes 30 years after the Consorzio’s very first Benvenuto Brunello edition.  The wine’s exposition was initially born from the desire to allow wine lovers and industry experts to focus on Italy’s most important wine labels.   Throughout the years, the assembly has focused on two significant facets:  the content of the conferences held during Benvenuto Brunello, and the tasting sessions held during the convention.

Starting on Friday, November 19th, at the early wine tasting time of 9:30AM, a collection of about 90 specially-selected Italian and international wine journalists gathered in the cloister of Sant’Agostino, glasses in hand. At our mercy were 119 wineries with hundreds of bottles of Rosso 2019, Brunello Riserva 2015, and the Brunello 2017 vintage!

It was a much-touted public notion that 2017 would prove to be a lesser vintage:  too hot, with overly alcoholic wines not unlike the overripe, overpowering Brunellos of 2003!

Beginning from January 1st, 2022, the 2017 vintage will be on the market. The drought of 2017 made the season a very difficult one to manage, with a notably dry harvest.  “We brought home bunches of grapes weighing up to 30% under normal weight,” explained Luca Fanti of the La Palazzetta wine estate.  We visited La Palazzetta on the first dinner hosted by select wineries in honor of the wine journalists who were present, and included labels from up to 6-7 external producers.

Echoing that sentiment was Santiago Marone Cinzano of the Col d’Orcia estate, and Leonardo Bellaccini, the enologist managing the Campogiovanni wine estate.  Both expert wine producers confirm that 2017 was a dry year, although the over-ripeness present in 2003 was absent.  Wines from this vintage feature an alcohol level in line with classic parameters, so hovering around 14,5%.

The Montalcino area is now a mature region, where producers know how to control the climate’s excessive oscillations.  The winemakers are able to protect their grapes from sunstroke, for instance, and are able to create the lightest wines possible, absent from a muscularity that would be detrimental to the quality of the wine. 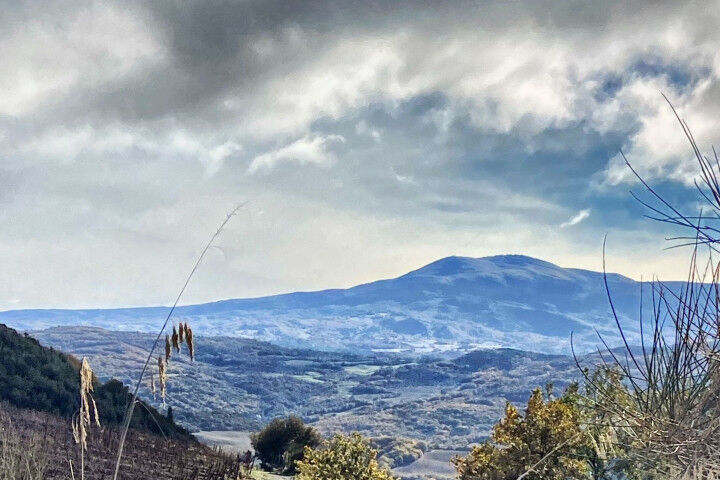 My review doesn’t intend to justify any of the possible limitations of the 2017 vintage.  This vintage doesn’t present itself as a good match for palates seeking depth, persistence or ageing potetation.  However, at the end of a tasting journey composed of over 140 labels tasted, I left with a refreshed palate and distinctive tasting memories.

The 2017 vintage are wines that experiment with the notion of subtraction. The 2017 vintage  expresses aromas of red fruits, Mediterranean herbs, and has a structural composition that recalls an expert in running marathons rather than a body-builder.

I did note some rough tactile elements with a strong alcoholic impression, but overall, the wines featured a level of sapidity that was most interesting, and an unexpected acidity that was a most welcome surprise.

In short, 2017 will not be producing wines with aging champions - if you’re in the market for this option, the Brunello di Montalcino 2016 Riserva is more your wine, with its remarkable combination of power and elegance.  The 2017 vintage are excellent gastronomic wines that are ready to be uncorked at a gorgeous dinner spread - it’s a done deal!

"Carlo Cracco is an iconic Italian culinary symbol, and in many ways, reflects the role of Brunello wines both in Italy and internationally.  In laying the 30th tile into our collection, dedicated to a decidedly interesting vintage, we’d like to strongly renew our special association and connection with the world of restaurants and fine dining.  This partnership with restaurants is the natural route for our wines to make their way into the hearts of the public, and thanks to the emergency situation of the last year, has lost nearly 40% of sales in Italy, the equivalent of approximately €38 billion.”

Following the inauguration of the 30th edition of the yearly tile, the 2017 Brunello wines were paired with the culinary interpretations of the multi-Michelin-starred chef and TV celebrity Carlo Cracco.  The evening proceeded with an array of flavors and emotions recalling a pre-pandemic energy and vigor.

Each year, the Consorzio del Vino Brunello di Montalcino selects an artist, sports figure, or celebrity to represent the year’s commemorative plaque with a nod to the just-ended vintage. Benvenuto Brunello also concludes each yearly presentation with an immense gala dinner to celebrate the vintage and the journalists present, all created by a culinary mastermind.

This year, the two figures coincide into one singular person:  Carlo Cracco.  Cracco was responsible both for the creation of the magnificent multi-course dinner as well as the design of this year’s commemorative tile.

The stage of Benvenuto Brunello is also the setting for the coveted Leccio d’Oro award, granted to international restaurants and fine dining establishments where Brunello wines occupy a heavily prominent position in the establishment’s overall revenue.  In short, the award is granted to those restaurateurs who are able to provide the most brunello wine selections to their patrons.

The Benvenuto Brunello conference was moderated by expert journalist Luciano Ferraro of the Corriere della Sera paper.  Featured during the conference was the moving presentation by Alessandro Regoli of Winenews.

Regoli adeptly recreated the diverse stages of Montalcino’s evolution and eventual redemption as a wine-making region.  The Consortium’s two previous presidents, Enzio Tiezzi and Andrea Costanti were also present, and we’d like to once again extend our fondest birthday wishes to President Tiezzi, in honor of his 80 splendid years!

Last but not least, the stage of the Teatro degli Astrusi, in the heart of Montalcino, was home to a series of presentations by at least a dozen Masters of Wine.  Leading the pack was the newly appointed Italian Master of Wine, Gabriele Gorelli.

Many of the presenters focused on the immeasurable success the Montalcino territory has experienced, and yet the presenters also called on its members not to rest on their laurels.  Instead, they urged the wine makers and journalists to continue promoting the Montalcino region thanks to its Rosso di Montalcino wine, a perfect wine with which to entrance younger wine lovers around the world, enthusiastic about Italian and Tuscan wines. 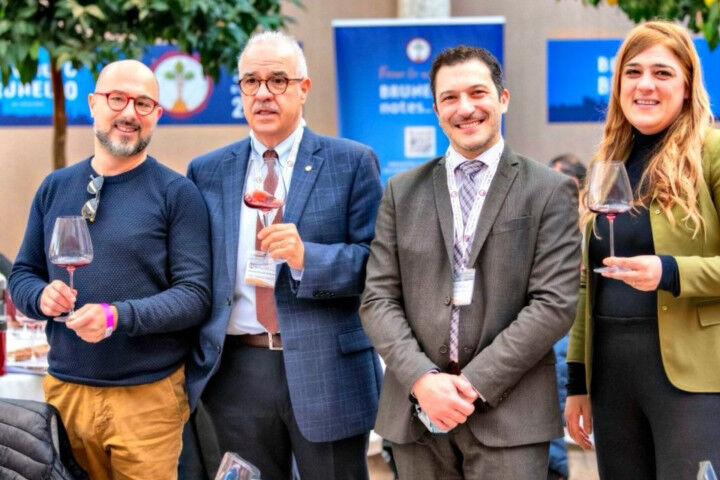 The wine of the future:  Rosso di Montalcino 2019

And speaking of Rosso di Montalcino, the following morning already provided the attending journalists with the ideal tasting experience.

This selection presented panelists with juicy, powerful wines filled with vigor and energy, with (best of all) an astonishingly high value for money.  In October, the wine was shown to have increased 61% in sales compared to the same timeframe in 2020.

This is a clear sign that the market is seizing the day in valorizing and having tremendous success with a wine that for so long has erroneously been perceived as Brunello di Montalcino’s little brother.   Clearly, the Brunello di Montalcino name carries more clout than that of Rosso di Montalcino, but it’s a selection with a proven popularity track record with Italian consumers.  The wine can claim familiarity with this label of up to 67% of wine buyers, and generally places ahead in sales when compared to classic Italian war horses like Prosecco, Chianti, Chianti Classico, and Montepulciano d’Abruzzo.

This is a fascinating statistic when you factor in the concept that the production of Rosso di Montalcino accounts for 0,2% of the national production of wine selections!

Overall, the formula that the Montalcino wine territory has adopted has proven to be a winning solution.  Leaving out some minor differences of opinion amongst Consorzio members, which is par for the course in any large organization, the winemakers of the Montalcino wine region are by and large supporters of this Consortium.

It’s the overall opinion in the world of Italian wine journalists, present company included, that the Consorzio di Vini Brunello di Montalcino have and continue to do a top-notch job in promoting and protecting the interests of the entire Montalcino denomination. 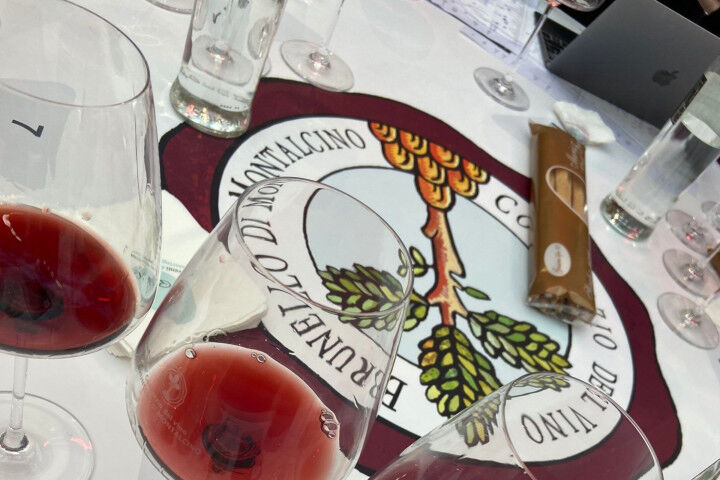