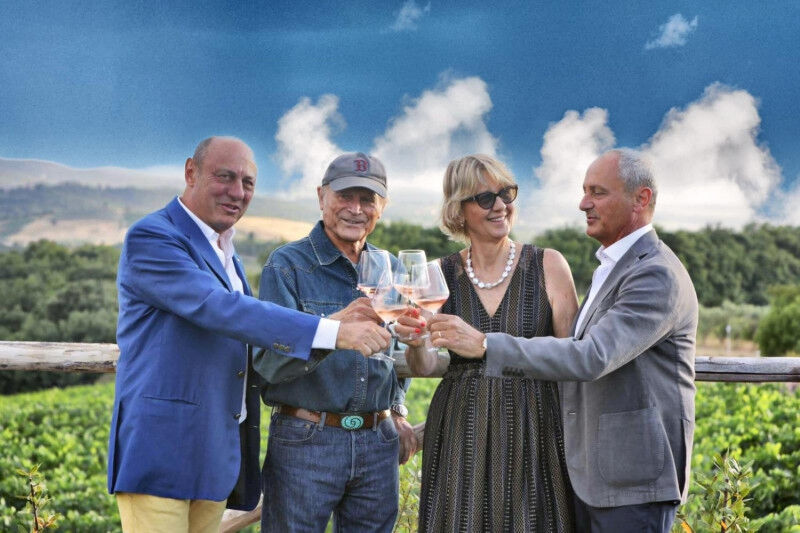 THE LEGACY OF THEY CALL ME TRINITY

What does a Spaghetti Western, or better yet, a Beanie Western have to do with wine and Hollywood?

They Call Me Trinity came out on the big screens in 1970, and from thereon in, it entered into the minds and souls of millions of viewers, even eventually reaching and inspiring movie-making in Hollywood.

The whistle that you hear in a few scenes of Django Unchained, and the alluring voice murmuring “He’s the guy who’s the talk of the town, with the restless gun,” are sound-based elements taken directly from the soundtrack of They Call Me Trinity, composed by Franco Micalizzi.

ROCCA DELLA MACIE AND THEY CALL ME TRINITY - THE WINE

And the wine?  Well, the producer of this extraordinary film was Italo Zingarelli, who thanks to the success of his films, was able to purchase land in Castellina in Chianti.  Today, Zingarelli’s son, Sergio, and his grandsons produce an extraordinary Chianti Classico wine.

50 years have passed since the first film showings, and Italo’s sons have opted to pay homage to the film series with a commemorative Magnum of Chianti Classico Selezione 2016 “Lo Chiamavano Trinità,” produced in a limited edition 1970 bottle.

A wine with an intense ruby-red color, and brimming with wild blackberries, violets, leather, and gunflint.  The wine features a very intense, very reactive palate, but a most pleasing wine to enjoy.

If you’re already getting excited about tasting this Rocca delle Macìe selection, check out the Zingarelli family history as it entwines with the world of Italian cinema, with Filippo Bartolotta to guide your exploration, Rocca delle Macie: Italian films, families and love for chianti wine.

A MUSEUM VISIT TO REMEMBER

The current generation of Zingarelli sons felt the need to commemorate their generous, innovative father beyond their dedicated Magnum:  the Zingarelli family established a small museum dedicated to Italo’s cinematic life achievements.  This small museum is a true gem of local photography and fascinating Italian cinematic history - we get a glimpse of a nation rebuilding itself not far removed from the Italy we see today in a post-pandemic world.

The museum’s inauguration was accompanied by a showing of the restored They Call Me Trinity, and a series of dedications and memories of Italo Zingarelli that notable authors, actors, screenwriters and friends have collected throughout the ages.

THE EVENING OF ROCCA’S MAGNUM INAUGURATION

The evening’s climate nearly interrupted the evening, creating a commotion in the kitchens of the renovated Osteria Passo dopo Passo, captained by the young Michelin-starred chef Maurizio Bardotti.  Bardotti would humbly later affirm “the evening was difficult, but the rain helped us, creating the need for us to tighten up our kitchen production line!”

So, with a few rain jackets over our shoulders, and some additional surprises sped the evening along.  Like, the discovery that Terrence Hill himself had insisted on the numerous horsing-around moments we witnessed during these films.

Hill stated “I filmed the wonderful brawls during the film Seven Brides for Seven Brothers, and I asked if I could do the same with Bud Spencer.  He consented, and we got over 10 minutes on film.

To film this scene, it took us a full week - back then, there wasn’t a whole lot of money in the world of film-making.”

And if it’s true that cinema is fiction, it’s also true that cinema is most importantly laden with emotional associations.  And for a few hours, everyone in the room was transported to the movie set - the warmth of the sunset, the yellows of the recently-harvested bales of hay, and Terrence Hill, who sipped on a Rocca delle Macie selection, and gazed out from the wooden barn out onto the extended vineyards below.

It took just a few seconds for this extraordinary actor’s sparkling blue eyes, blue jeans, jean shirt adorned with a golden sheriff’s star pinned to it, for Hill to inspire the crowd to collective whistle the classic western notes of the film’s soundtrack.

The Rocca delle Macie wine, that excellent wine served its most exalted purpose of not making the evening all about it, but instead facilitating a meeting amongst eager participants.  The wine helped create the right ambiance, the sort of evening where something magical can happen.

This doesn’t happen every time, but the 50th anniversary of the Trinity opus allowed just that to happen, thanks to Bud Spencer, Terrence Hill, and the fabulous Zingarelli family. 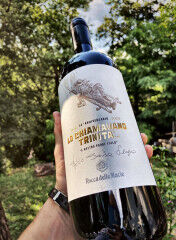 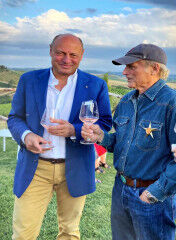 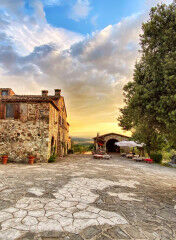