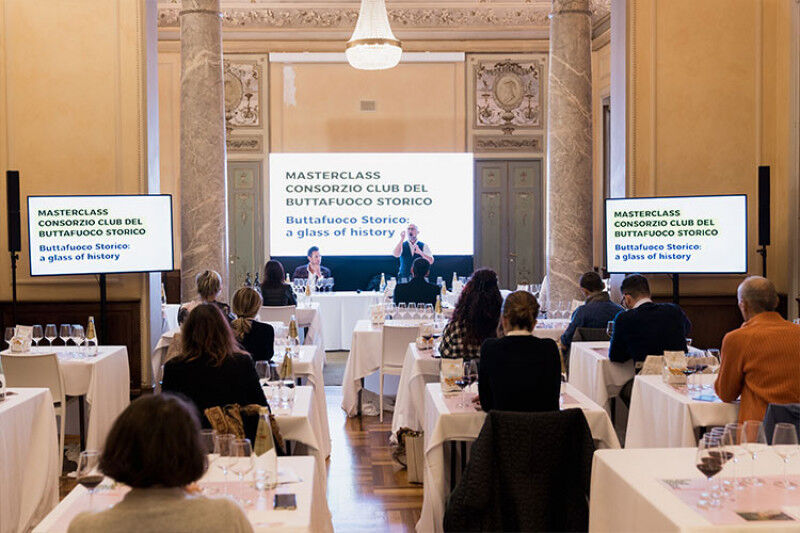 All the Brunello di Montalcino appointments at Milano Wine Week 2021, the participating wineries and the scheduled tastings.

In this article we will discuss:

Brunello di Montalcino in the Vittorio Emanuele II Gallery. This is one of the most eagerly awaited novelties of the 4th edition of Milano Wine Week; the wine week which involves the 10 main Milanese districts, transformed for the occasion into as many Wine Districts.

Each district is linked to a consortium for the protection of an Italian wine: walking from one district of the city to another, one can taste the best wines from 10 of the main Italian wine territories, talk to the producers, compare the different bottles and get a good idea of the world of quality Italian wine.

A wine journey through Italy in just a few steps

In addition to Brunello di Montalcino, one of the most famous and well-loved wines of Italy, which can be tasted in the restaurants of Galleria Vittorio Emanuele II, the Milanese will be able to taste the wines of Valpolicella in the Marghera/Sanzio area, the wines of Abruzzo in Porta Venezia, Chinati in the Navigli and Ligurian wines in the Isola area. These are the novelties to Milan Wine Week.

Other areas of wine production are returning: Franciacorta bubbles will be uncorked in the Brera/Garibaldi/Solferino area; Asti and Moscato d'Asti wines in the Sempione/Arco della Pace area; Prosecco DOCG di Conegliano di Valdobbiadene in Porta Nuova/Gae Aulenti; Lugana DOC wines in Porta Romana and Oltrepò; and Pavese wines in the Eustachi/Plinio area.

There are about 300 events scheduled.

Some of the wineries present at Milan Wine Week

Producers also take advantage of this occasion to meet consumers directly, to talk to them about their wines and to tell their story. There are many opportunities to meet, from dinners with producers to fully fledged events.

The Pasqua winery will be present with a work entitled "Falling dreams", an experience between dreams and reality. The art installation, conceived and designed by NONE Collective, in collaboration with BASE Milano, can be visited with free entry from 6 to 9 October (from 6pm to 10pm).

The Berlucchi winery, on the occasion of its 60th anniversary, will be in Corso Vittorio Emanuele II with a photographic exhibition recounting the birth of the winery and the Franciacorta territory.

Beyond the city boundaries: the Masterclasses

In order to take Italian wine beyond the borders of our country, during Milan Wine Week there will also be several masterclasses connected live with 11 international cities aimed at companies, professionals and the press.

Mamablip is present at Milano Wine Week with Filippo Bartolotta

"Telling the story of Italy's great wines and territories is an honour and a duty," says Filippo Bartolotta, speaker of a dozen masterclasses as well as co-founder of MamaBlip. "Like all the great wine events, Vinitaly in Verona, Rheingau Wine Festival in Frankfurt, and Vinexpo in Bordeaux, today Milan is an opportunity to spotlight our territories and their stories, for a consortium to showcase a collective brand or for a company to tell the story of its wines - in Italy and abroad".

Brunello di Montalcino: or better "The miracle of Montalcino"

Among the terroirs that Bartolotta talks about, he focuses on Montalcino, whose secrets he already revealed last year in a series of six videos entitled "The miracle of Montalcino" made and published on Mamablip.

“This terroir is a miracle, a model of success," Bartolotta says. “It is a sort of oasis in the middle of Pliocene clay soils where nothing grows. Instead, here there is this miracle of SanGiovese and Brunello, built by men.

This was one of the poorest municipalities in Italy after the war and has become one of the richest, thanks to the work and cohesion of an entire territory.”

In Milan the Masterclasses talking about Brunello, will focus on Le Riserve 2015 and Montalcino's Versanti 2016.

"They are two different vintages, both extraordinary” Bartolotta discloses. “In recent years the producers have become more aware of the differences there are. We can divide the territory into four areas: a northern side that offers wines that are more floral and taut; a southern side that produces wines that are a little more old-fashioned because there is more sand and so they are broader, more ready wines; the western side that gets the sea breeze, where the grapes are permeated with the sea; the eastern side that is a little more mineral rich and austere."

As far as the Reserves are concerned, he continues, "in general they are made in Montalcino often from a single vineyard. At their best, they are made when the producer finds grapes or discovers a barrel that is more ready for ageing”.

We are looking forward to discovering and tasting the 2015 vintage

What do you expect from this event? In the meantime, come with us to Milano Wine Week to taste the great Italian wines!