The Wines of Gravner: Renowned Ribolla Gialla is not Gravner’s Only Wine

Josko Gravner has thrown it all away, more than once. When he started making wine 30 years ago outside this small town in the Friuli-Venezia Giulia region of northeastern Italy, he produced crisp, aromatic white wines in a popular style, using the latest technology 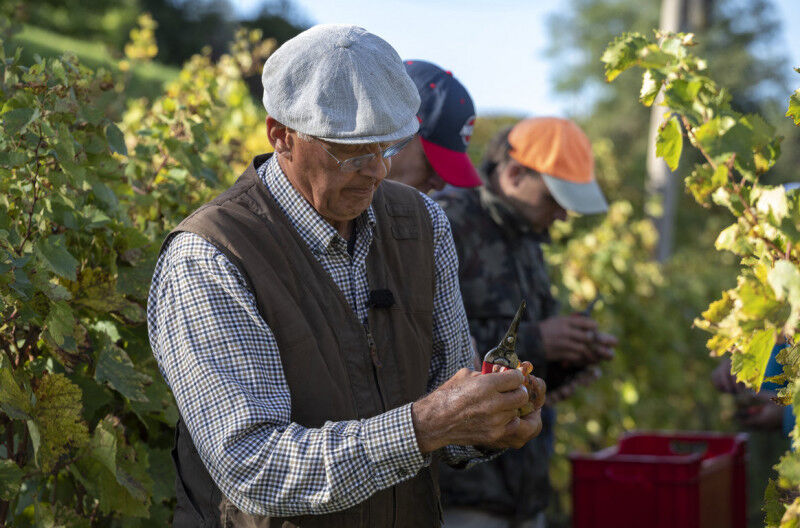 As unexpected as it may sound, the wine name Ribolla has proven to be one of the most researched grape types in Italian search engine results. Believe it or not, this is a fire-hot trending topic, and has been for some time. Understandably, Ribolla’s popularity on the internet has also translated into its representation on supermarket shelves.

With such a pre-existing buzz around them, Ribolla Gialla wines have a proven track record of easy, high sales.

The Ribolla Gialla autochthonous grape can be found in Northeastern Italy’s Friuli-Venezia Giulia region. Zeroing in on the Gorizia and Udine provinces, we find a local Friiulian producer with roots in nearby Slovenia as well. Josko Gravner, of the Josko Gravner wine estate, is devoted to the cultivation of the Ribolla Gialla grape, with an end result that is far removed from the varieties of wines available at the supermarkets

Mateja is dedicated to adjusting the erroneous misperception that Gravner is a white-wine only winery, a concept greatly spread unjustly through assorted social media channels, which tend to share only one side of the wine-making story.

Josko Gravner’s daughter recently spent the morning with me, with the winery’s unheralded red wine as the protagonist of the morning, and of our exploration of the Gravner estate.

The Only Red Worth Having - Pignolo or Nothing

The Gravner winery will have only one red wine available, and its name is Breg. The big names of Gravner’s past, like Rujno or Rosso Gravner, made with Cabernet Sauvignon and Merlot grapes, will slowly be phased out to make room for the exclusive focus on Breg.

The Oslavia winery isn’t anticipating bringing back the Rujno until at least 2035, and intends to fully develop the red wine crafted with the Pignolo grape, the only other varietal Josko committed to growing outside of the universally appreciated Ribolla Gialla.

The creation process of the Breg wine is a long one, requiring patience and dedication to a final product. The wine has been fermented on their skins in wooden vats up to 2005. Following this first step, the wine is then kept in underground amphorae through 2006, brewing with indigenous years and completely absent from temperature controls.

We then head on for an oak aging for 5 years, and a further 5 years of aging in bottles, if not in fact longer than 5 years. For added esoteric appeal, the wines are bottles with a waning moon, absent entirely from clarification or filtration.

These wine-making production choices may seem extreme, but for the cutting-edge (and risk-taking) Gravner, there was never any doubt of which route to follow. Following on the heels of his successful international blends of the 199s, and a visit to the playgrounds of the colossal California wineries, Gravner decided the time was right to dedicate the winery’s resources entirely to native grapes.

Accompanying that decision was also an abandoning of vinification in steel cats, in preference of the adoption of more traditional wine-making techniques. These include long macerations, and the use of large buried terracotta amphorae, following the classic method practiced in the Kakheti area of the Caucasus. This wine-making process dates back thousands of years, a feature that did not escape Gravner as he undertook this most unusual path.

Gravner also implemented the natural cyclical rule of 7: just as humans experience naturally-occuring modification in our cellular structure, the same can be said of wines. As wines need an aging time of 7 years, we must heed the need of the wines to change their structure, allowing for one year aging in amphora, and another six years in big casks.

The choice of Pignolo made by Josko Gravner

The latest Gravner red available for purchase dates back to 2007, and comes on the heels of 5 years cask-aging, and 9 years of bottle-aging. The vintages from 2003, 2004, 2005, and 2006 are also available, but before we get any further, let’s review what we know about the Pignolo grape.

This ancient varietal has been present in the Friuli area for many years, with the first written mention dating back to the 14th century. Documentation from that time shows the vine spreading its territorial growth from the hills of Rosazzo in a western direction, towards the city and province of Udine.

The production area of Oslavia today however, doesn’t recognize the Pignolo grape as being part of the DOC or IGT, so Gravner is forced to label this wine with the term table wine. The Pignolo grape is particularly sensitive to the fungus oidium, and had essentially disappeared from the area’s ampelographic lists by the 19th century. With the discovery of some old vines in the Abbey of Rosazzo’s vineyards, a recovery and rejuvenation of the vine became possible.

Thanks to the encouragement of wine journalist and wine critic, Luigi Veronelli, Gravner first began exploring the Pignolo vine in the early 1980’s, following up on ths interest in the 1990s when the first vine shoots were planted into the Gravner vineyards.

Today, there are currently 12,000 vines on the Gravner estate, with a vast variety of production relative to the yearly vintages. Numbers vary between 1,200 to 3,000 bottles per vintage.

The vines are planted on approximately 15 hectares of land, although the area is constantly being converted to more green areas, featuring gardens, trees, shrubs, and ponds. Thanks to this vision, the natural ecosystem is being constantly regenerated and reborn thanks to the presence of these green spaces where local flora and fauna can find their local roots once again.

Indeed, it was in the nearby Runk vineyard where the first area regenerative pond was born, right in the natural home of the Ribolla and Pignolo vines. 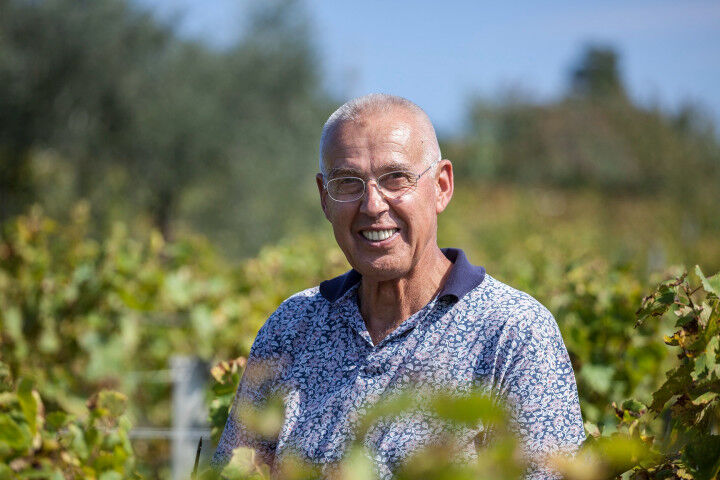 Right off the bat, it’s worth noting that Gravner Breg is not a simple wine, and thus merits a deeper, closer look. As Josko himself has noted, we face an upstream experience from the get-go with the Pignolo grape.

This fruit is a spoiled genius, Josko claims, one that is never the same, that needs plenty of attention, and above all else, ample time to display its harmonious side. This is a patient person’s wine, essentially.

The first pure Pignolo Breg vintage, with a very tight production of 1,500 bottles in total.  2003 proved to be a very hot year, which in our Breg, shows up as a palpable reluctance, a wild tone and tannins that are still a bit rough. But it’s thanks to these elements that we can taste the precious nose of incense and blueberry. The taste features a fresh-fruit aroma, and is striking thanks to its well-calibrated acidity, with a note of spicy pepper that invites the drinker to continue sipping happily.

This year saw the production of a more expansive vintage with greater balance. With less gloom and more lively tones, crisp notes, and even a touch of rawness about it. Once again, we can infer a peppery not, with a very long, balsamic aroma on the palate.

The vintage is a bit more incisive than the last, with definitive notes of enamel and assertive fruit notes in the nose. A refined, mineral texture eventually appears on the palate, once the initial sensations have dissolved and leave more room for these alternative sensations.

The 2006 vintage was the first year that amphoras were incorporated into the fermentation process, leaving out the wood casks generally used during this step. The vintage was released exclusively in magnum format, and remains Josko’s preferred vintage to date.

The use of amphoras lends the wines more “air,” allowing for more flexibility and less contraction in the wine. It’s unlikely to be a pure coincidence then that the first notes we sense on the nose are green mint and forest aromas.

This balsamic nature returns on the palate, and makes the wine seem like a mountain wine. The wine also features a significant residual sugar that transforms into a certain creaminess, interestingly enough, not a sweetness.

Even though at this stage the wine is nearly 15 years old, we still can sense a certain unripeness yet. This is a selection with everything going in its favor, although it still does need guidance. Biting acidity, ively fruit, and an energetic structure. In short, a lot of elements that simply need to be refined by the passage of time.

Compared to the previous vintages, this section also features a specific savoriness that makes it feel like a most personal wine. 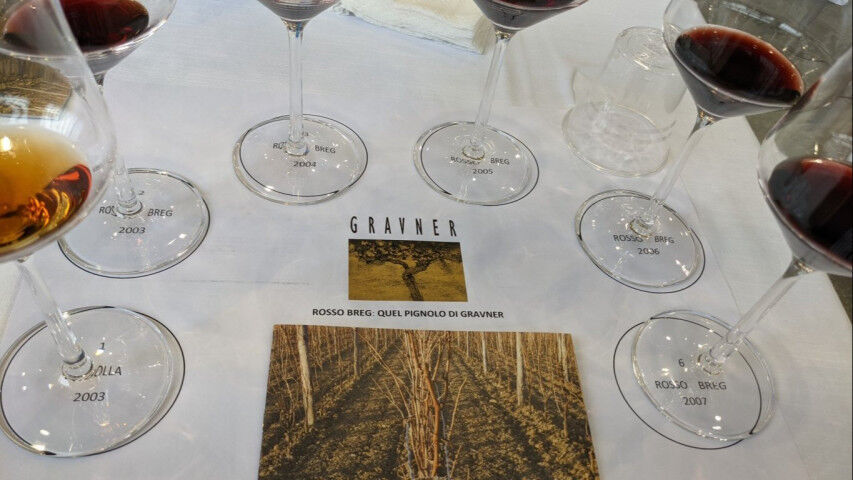 Breg Rosso, a wine for truth-hunters

You know when something (or someone) is described as being ideal for the rarified few? Well, we can confirm that Breg Rosso isn’t even necessarily right for those select few. Not only because of its cost, which of course is a big consideration, but essentially, because this wine forces you to ask some serious questions.

Actually, one major question: what are you looking for in a wine? That it satisfies you, or that it shares its truths with you?

Breg Rosso, if you’re in the second group listed above, does just that. This is a wine that is completely, entirely, fundamentally uninterested in the desire to please the wine drinker. Here, the Breg Rosso wine is more interested in replicating its own history as part of the Oslavia wine territory, and how it holds its position in its vintage.

Breg Rosso contains no frills, and is a wise, solid wine that recalls the presence and aplomb of old oak trees or ancient silvery olive trees.

I personally adored the versions fermented in wood, but objectively speaking, there’s no doubt that the “new” approach of time in amphora gives the wines a more open breath, almost as if to allow part of the wine to escape from established definitions.

During tastings, you invariably find wines that you can describe and explain from start to finish, and then every once in a while, you come across a wine like Gravners: mysterious and sublime. The fascinating part of tastings are the attempts we make at grasping these hidden elements. 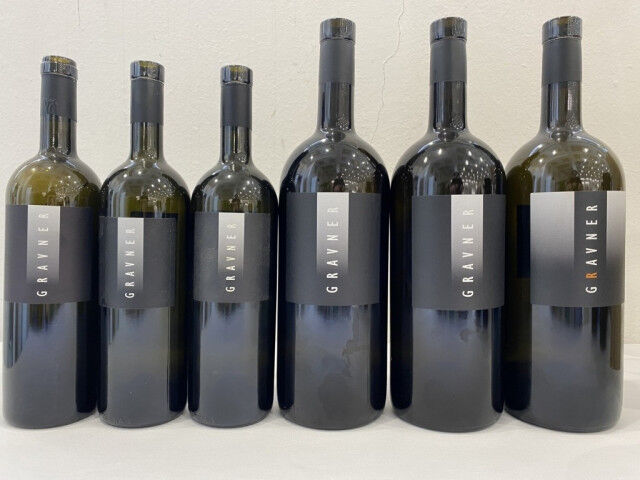