Lugana: discover a stunning Italian territory with its ancient wine

The Lugana territory produces a high-quality wine. Here we find wine cellars with ancient traditions and that export wines all over the world 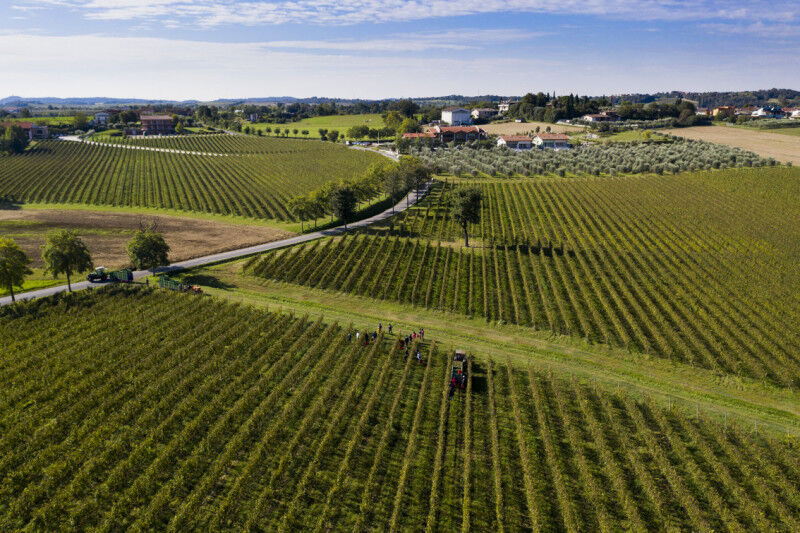 Lugana is an area geographically encircled by Lake Garda, and extends into two highly distinct regions, Veneto and Lombardy. In nearly every facet of this area is the presence of overwhelming dualism and individuality, co-existing at the exact same levels. The protagonists of the development of this story are ancient partners (and foes):  Man and Nature.  An overall geological and visual transformation that has defined the region is the result of man’s development of the area. Glimpsing the tremendous potential this land contained, man has drawn out the land’s very soul, turning the land into a productive, magnificent fertile, verdant oasis.

The physical territory of Lugana is delineated within a sort of magical rectangle, with Sirmione and Pozzolengo establishing its vertical borders.  Desenzano and Peschiera del Garda instead identify the horizontal borders of the Lugana area.The wine appellation of Lugana extends along the southern morainic plains of Lake Garda, straddling two provinces (Brescia and Verona) and two regions (Lombardy and Veneto).

Lugana’s wines are refined, white wines with some elements of classic lakeside wine selections.  The wine’s creation harkens back to Roman times, giving this specific wine additional authenticity and credo.  The actual traditional style of local wine-making first received recognition and certification in the distant 18th century. The Lugana area features beneficially mild and temperate climatic conditions, which allow the local Turbiana varietal to sink its roots into the lakeside’s clayey soils. The vine in turn expresses the very soul of Lugana, lending the wine's structure and positive longevity further enhanced by aromas of wild flowers and citrus fruit.

The History Behind the Wine

The Lugana DOC wines are produced in the lands south of Lake Garda.  Since the Bronze Age, viticulture has had a presence locally.  Until the birth of the Republic of Venice, the land was primarily a marsh forest.  With the arrival of the Venetians, the land was cleared in order to increase local wheat and grain harvests. Thanks to these agricultural modifications, the local landscape was forever altered.  From thereon in, the cultivation of grapes overtook that of the grain harvest, and today, the land is a veritable garden of vineyards.  Without a doubt, the Lugana and Lake Garda area is one of northern Italy's most breath-taking areas.  It’s hard to imagine that Lucana (from the Latin iocus, meaning wood) of yesterday was overrun with marsh lands.  When compared to today’s criss-crossing of vineyards, olive groves, wineries and noble villas, it’s nearly impossible to imagine the difference of the lands’ visual impact of past eras.

It’s thanks only to mankind’s intuition and labor that the Lugana area was transformed into a land filled with rich opportunities that we know today.  Shining with lush natural elements, the labor of deforestation followed by reclamation has brought forth a priceless Italian landscape. 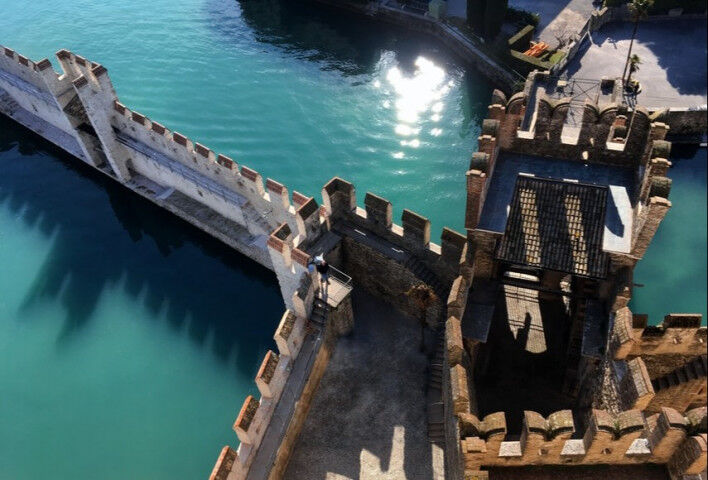 The lands of Lugana extend across a wide, expansive plain.  This area is characterized by fertile soils with strong clay matrixes therein.  These clays are stratified layers of morainic origin, and are of a sedimentary nature.  Resulting soils are mainly calcareous, and rich in mineral salts.  The soils have a tendency to reflect difficult characters as they’re hard and prove impenetrable for vineyard roots in moments of drought.  The soils conversely become soft and muddy when the rains hit.

While these clays in the soil prove to be difficult elements, it's the same clays that, when alternating with a more penetrable sandy matrix, become the area’s natural reservoirs of the local organoleptic heritage.  These features are what ultimately mark the wines with their territorial identity:  body, warmth, acidity and flavorsome structure. Wines from this region are decisively marked with vigorous, clear scents with clear hints of almonds and citrus in their final aromatic heritage.

The microclimate we find in the Lugana area is constantly refreshed thanks to the area’s mild temperatures that act as a climatic cradle.  This is the ideal scenario for tending to the peculiarities of specific grapes like the Turbiana varietal.  What helps the most in the vegetative and productive developmental stages of the vines?  Critical to their success are the mild, constant temperatures of the area that are often influenced by the breezes coming off Lake Garda, and the low fluctuation of temperature changes between sunlight and evening times.

A close relative of the Trebbiano di Soave grape, the Turbiana varietal is actually much closer in habits and growth to the Verdicchio dei Castelli di Jesi.  Genetically similar to Verdicchio, the Turbiana differs from its associated vine in its phenological, agronomical and oenological yield. The Turbiana grape is composed of a medium, compact cluster with an elongated,  pyramidal shape.  The grapes have thick skin with a typically juicy pulp and proper acidity content.  This grape works wonderfully in both still white wines and sparkling wines.

While the vines have a rich, historic background, winemakers using this vine also have their eyes on the future, creating white wines rich in personality and individual accents. While the appellation regulations do stipulate that complementary grapes may create up to 10% of the wine’s final composition, Turbiana is often the sole grape used in the production of Lugana wines.  This is primarily thanks to the varietal’s capacity of expressing the unique terrier’s characteristics.  This is unusual in the realm of Trebbiano varieties, but ultimately gives the wines an elegant, long-living quality.

As Zeffiro Bocci noted, Lugana is “two-faced.”  Bocci clearly intended that due to its geography, the area is naturally a double-faced region, containing portions of Lombardy on one side, and Veneto on the other side.  Beyond a simple question of accents or political and territorial divisions, the region displays a curious balancing of forces in this arena.

Speaking strictly along the numbers element, the Lombardy region stakes a claim to the larger part of the wine-producing region.  The region produces up to 1500 hectares of land planted with vines.  The number of provinces within the Lugana appellation reach up to 4 municipalities:  Desenzano, Sirmione, Pozzolengo and Lonato del Garda. In contrast, the Veneto region claims only one municipality, Peschiera del Garda, which does instead produce a record of commercial volume:  up to 50% of wines bottled in the Lugana appellation are handled directly by producers from the Verona area. Furthering the natural split between the two regions of Lugana, the territory is also divided along a viticularual perspective.

The first, largest area is a flat region, characterized by the hardest clays of the area.  The area spreads out horizontally amongst the hinterlands between  Desenzano, Sirmione and part of Pozzolengo and Peschiera. This bit of land represents the absolute beating heart of the denomination.  This specific bit of land is the repository of the more traditional lakeside, mineral style typical of Lugana.

The second area is hilly, and runs between the cities Pozzolengo and Lonato.  Here, the earth’s clays are decidedly sandier.  The hills are more gently undulating, with altitudes reaching a maximum of 130 meters. This region features soils with morainic matrices and gravels that lend their wines a stron, full-bodied acidity with a lighter natural mineral imprint. 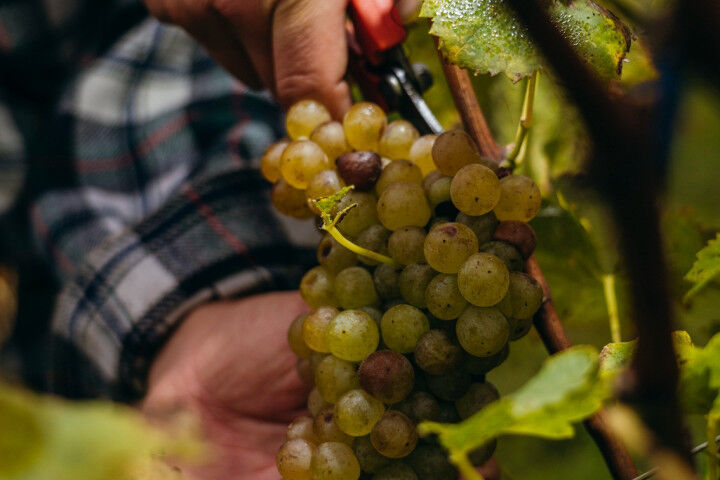 Today, Lugana not only translates into the wine region of your dreams, but also the international wine region of your dreams.  In its most essential form, when bottled as Spumante, Superiore, Riserva, and Late Harvest options, Lugana is the most exported wine of Lombardy.  Up to a startling 70% of this wine is destined for foreing wine-loving markets. The secret of the Lugana wine’s success is thanks to its inherent top-notch quality, as well as being a unique, refined, contemporary wine selection.  The wine's immediate drinkability and complexity when paired with an excellent quality/price ratio are further secrets of the wineìs success.  By creating a wide network of loyal Lugana drinkers, this wine will be welcome anywhere in the world for the unforeseeable future.

Forward-thinking wine producers can exalt the qualities that make this ancient wine so unique while at the same time ushering in innovation and sustainability.  Few other wine regions are able to express a true sense of respect for a local vineyard location, while blending together longevity and a respectful nod to the past.

Historical evidence dealing with the Lugana vine’s origins are admittedly hazy.  What we do know about the historical origins of this varietal date back to the ancient grape seeds of Vitis Silvestris, found near the piles of Peschiera del Garda. These seeds have been reliably dated back to the Bronze Age.

The Consorzio di Tutela del Lugana consortium was founded in 1990.  The Consortium shifted from being an organization responsible primarily for the protection of the DOC to being an expert communicator and marketer of the Lugana DOC brand. Today, the Consorzio also handles cases of wine protection within the field of unfair competition.  The Consorzio works to uphold the wine’s quality with a fight against price ways and undercutting, which ultimately may have negative effects on the quality of the Lugana wines.  The Lugana denomination was created in 1967, and is recognized as the first DOC indication in the region Lombardy, as well as being one of the very first Italian DOC.

Lugana: a magical place with a time-traveling wine

“Lakes:  a natural ability to wait and endure outweighs our desire to reach the sea.”  The sea generally represents a sense of energy, of movement, and of action.  When you visit the sea, you are in a state of transformation, as you observe a panorama that never presents the same sites twice. Lakes on the other hand, are embodiments of calm and contemplation.  The calm surface of the lakes’ waters soothes the sensation of restlessness you might have.  The waters seem to gently embrace those who are reflected in its surface. Lake Garda has historically been a significant background for human and personal relationships.  Throughout history, the region has inspired a series of writers and philosophers to write a series of contemplations of this most unique ecosystem.  For some writers, lakes can represent adventurous territories, whereas other artists instead find the lakes to be physical mirrors of their own musings.  While meandering lakeside, visitors can relive ancient memories that reappear as new experiences to be relived.

It’s precisely in this mindset that Lugana was born - its ability to express the aromas and ambinaces of the very lake.  The wines elegant, floral notes soothe the mind, and ignite the senses, bringing to the surface the very beneficial experience of the lake.   When you taste the wines of Lugana, you can appreciate every single delicate lake-like nuance.

Just like the lake, the white wines are not in a hurry to toss themselves into the turmoil of the sea.  The wines instead prefer to be slowly discovered, with each detail apprised and appreciated at the pace of the wine drinker. Thanks to this wine’s ability to evolve throughout time, the wine is one of the most popular selections in international wine markets.  As you enjoy tasting your Lugana selection, your mind will be transported to the shores of Lake Garda as you explore one of Italy’s most fascinating Northern areas. 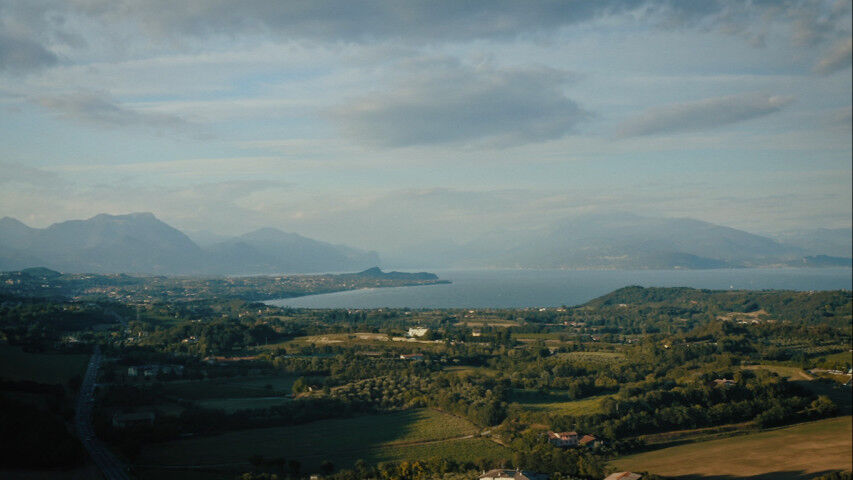