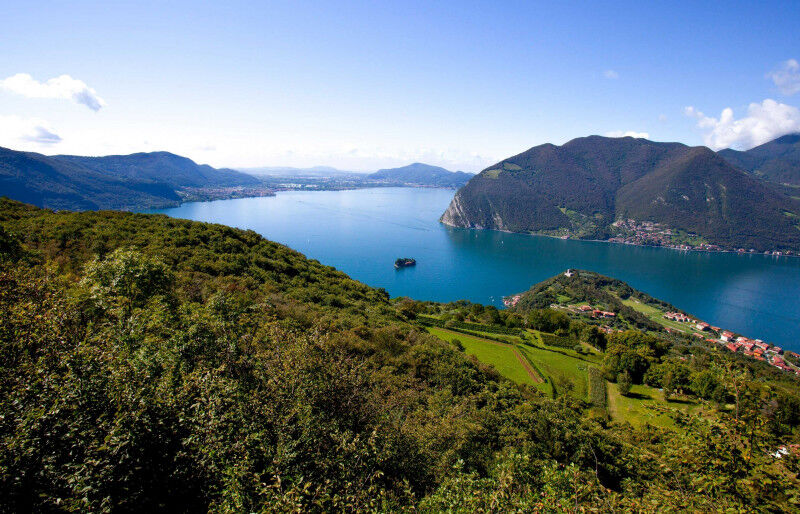 The Franciacorta territory is located in the northern Italian region of Lombardy, within the province of Brescia.  The territory is bordered to the East by the area’s morainic and rocky hills, and to the West by the Oglio River.

The Northern area instead is edged in by the shores of Lake Iseo and the lingering hills of the Rhaetian Alps.  The Southern border instead is characterized by a flat alluvial plot of land connecting Brescia to Bergamo.

The entire area is a most enticing landscape, filled with meandering vineyards and small villages with picturesque castles, abbeys, and ancient towers.  Visitors will be rewarded with visits to patrician villas and the area’s natural reserves brimming with local beauty.

The local environment is favored by a particularly cooperative climate, where cold winds blustering in from the Val Camonica area are mitigated by Lake Iseo’s influences and the territory’s small moraine hills, naturally rich in minerals.

The Franciacorta name originates from curtes franca.  This name refers to the small communities of Benedictine monks who had settled in the area during the early 13th century.  These communities were exempt from local duties typically paid to local lords and the leading Bishop for transportation and trade of local goods with other states or land possessions.

The small Franciacorta territory is composed of 19 individual communes all located in the province of Brescia.  Falling near the Lake Iseo area, the territory is one of the finest examples of agricultural and entrepreneurial success within the fine Italian wine scene.

The Franciacorta wine region has had six “vocational units” identified within its lands.  Each unique unit features soils with distinctive composition, based on the earth’s fertility, texture and drainage capacity.

The determination of these characteristics have proven to be an excellent tool both on the agronomic perspective as well as the enological standpoint.  The soil features help agronomists identify the ideal vineyard planting zones, and assists the enologists as they form the region’s cuvée selections.

The area’s main vine type is without a doubt Chardonnay, likely introduced into the territory in the 1950s.  It’s only in the 1960s however that Chardonnay is identified as a separate varietal from Pinot Blanc (the third vine found in Franciacorta).

The area’s second most present vine is Pinot Noir, with a fourth having been introduced into the region quite recently.  Erbamat represents this fourth varietal, bearing the weight of wine-maker’s expectations that the vine will recover a certain element of specific territorial identity.

It’s expected and hoped that the Erbamat varietal will also mitigate the negative climatic effects the previous grapes have had on the region’s soils.

The Franciacorta wine is a sparkling, bubbly wine, although Franciacorta labels don’t always indicate this feature.  The only word appearing on the labels of area vintages is Franciacorta.

Franciacorta wines represent the first Italian sparkling wine to obtain the coveted DOCG status.  The wine is also the first of its ilk that pushes back on a definition of simply sparkling wine, and prefers instead to be recognized exclusively thanks to its geographical denomination and its territory of origin.

Just how did the Franciacorta wine, invented in the 1960s in a land without any previously-existing enological glory, reach a pinnacle like DOCG status before the rise of other renowned Italian sparkling wine producers?

Thanks to this partnership and dedication to the development of a top-notch wine, today, Franciacorta represents what is unanimously considered Italy’s most renowned, appreciated Italian Classic Method wine. 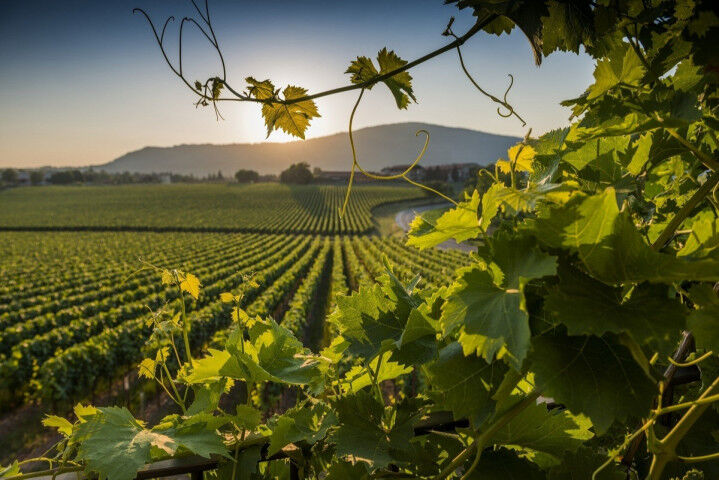 Franciacorta: Geographic Details on the Territory

The key to this extraordinary success lies therefore in the union between the age-old viticultural know-how and modern entrepreneurial experience.  The resulting knowledge and capabilities were instantly implemented in the heart of the vineyards and the cellars.

Thanks to the commercial background of select wine producers, it became evident that viticulture could prove to be profitable in the end resulting wines produced were guaranteed high-quality selections with inestimable added value in each bottle of locally-produced Franciacorta wine.

Wine making and production has ancient origins in the hills of Franciacorta.  Proven by the discovery of grape seeds dating back to prehistoric eras, and the presence of ancient texts by authorities like Pliny, Columella and Virgil, the presence of wine-making in Franciacorta has been felt for endless generations.

From Roman time through Medieval eras, vineyards were established in areas of the territory that were deemed to have the most favorable climate and soil conditions.  Throughout periods of both favorable and negative conditions, wine-making in this territory has been a constant presence.

The process behind the creation of Franciacorta wines today is quite regimented and strictly followed by modern Classic Method producers.  The process in Franciacorta production is so specific that it’s locally referred to simply as the “Franciacorta method.”

In order to appeal to as many wine lovers as possible, today’s Franciacorta producers have amplified their range, offering not only the traditional Brut and Extra Brut options, but also a lovely Rosé, a Special Cuvée, a REserve, and a Extra Dry, Sec, or Demi-sec option as well.

In creating the Rosé vintage, and with the aim of improving the wine’s colorful appearance, producers even made an exception to the locally-accepted ban on combining red and white wines.

Wine experts do agree that the most forward-thinking production move was to focus on two production styles that were not a fundamental part of the historic producer’s line of vision:  Dosage Zero and Satén.

Dosage Zero is quite dry, and completely lacking in residual sugars.  Producers took a gamble and followed an instinctive idea that public taste would appreciate this process - they’re still riding that wave of success today.

Satén instead is produced with a lowered carbon dioxide pressure.  This process appeals to wine lovers who prefer a reduced amount of bubbles as compared to traditional sparkling wine options.

The resulting Satén wine continues to experience a most devout following.  Satén producers also hit the nail on the head in terms of name selection.  Only members of the Consortium for the protection of Franciacorta, who registered the name as an official trademark, may use this name on the wines. 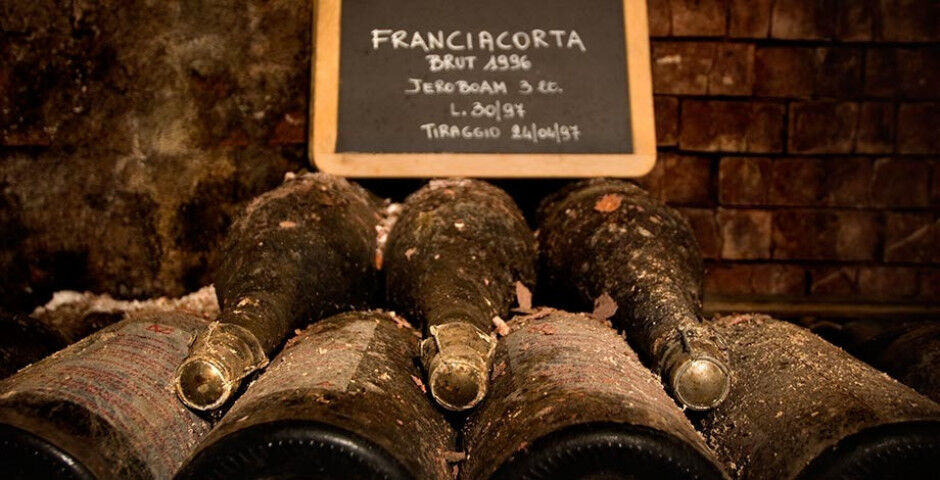 Classic Method Franciacorta wine takes place over two separate phases:  the creation of still wine, or the base.  THis is followed by the sparkling process used on the still base.

Once the still base is deemed pready, select yeasts and sucrose are added to their base.  The wine is bottled with crown corks, which sets the frothing portion of the Classic Method in motion.

How are the bubbles created?  The added yeasts consume the added sucrose, transforming into ethyl alcohol and carbon dioxide.  These elements cannot evaporate, and remain as features of the wine.

Yeasts die at the end of the process, forming a dark, floury deposit on the sides of the bottle.  The following steps are the proper amount of time given to the wine’s carbon dioxide to dissolve entirely. This process results in the persistent, fine perlage we enjoy in Franciacorta wines.

Following the disintegration of the carbon dioxide, the residue of the ethyl alcohol must be eliminated.  In order to remove the residue,  rémuage or shaking, is applied.  This process involves regular hand-rotation of the wine bottles, and allows the yeasts to naturally slip away from the sides of the bottles, adhering instead to the wine corks.

Once the residues have been shifted to the corks, the deposits will then be removed following an innovative process.  The bottles’ necks will be immersed in a brine chilled to -20° C (-4° F).  This allows a small amount of the sparkling wine inside the bottles to freeze with the residue inside the frozen wine.

The bottles are then turned manually, and uncorked, referred to as the dégorgement or disgorgement process.  By removing the frozen wine and deposits, the remaining wine in the bottles remains perfectly clear and limpid.

The final step is replacing the sparkling wine that was removed with the deposit (see Flavor types above), culminating in a final corking with the classic mushroom stopper, and the insertion of the aluminum cage.

The names listed above represent 15 important Franciacorta producers with deep roots in the area, and the fundamental belief that this tiny, magnificent Italian territory can continue producing wines of considerable value and prestige in each and every vintage. 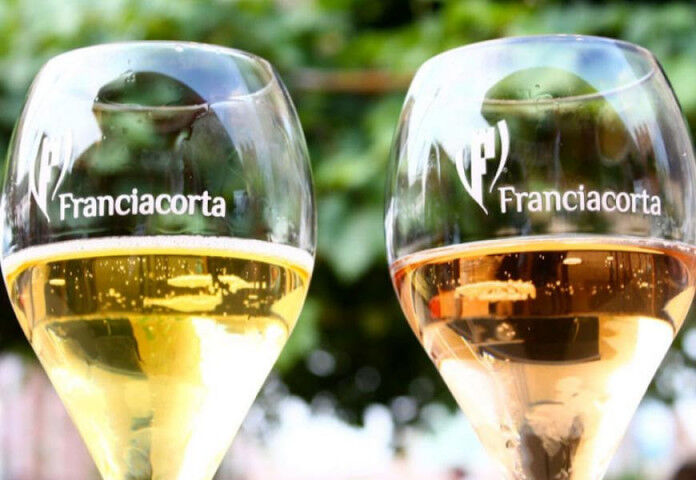