The Gallura region is one of Sardinia’s most suggestive destinations. Experience paradise as you explore the idyllic island and beaches of Maddalena, passing through the towns of Santa Teresa and Porto Cervo 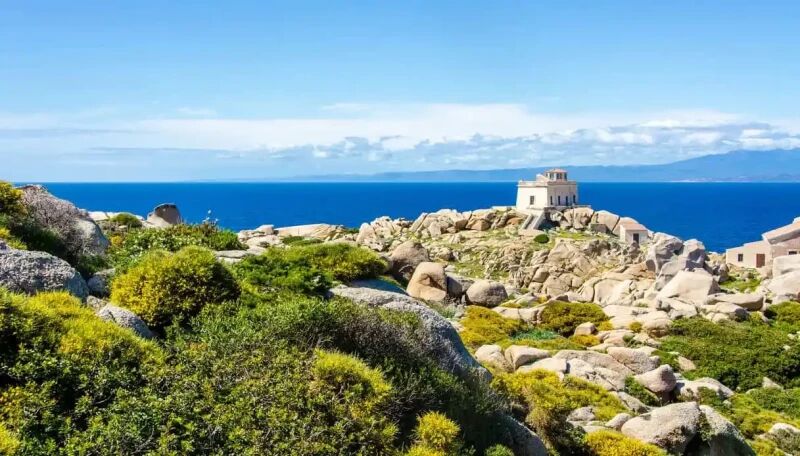 The Gallura region, occupying just a few square kilometers in northeastern Sardinia, is in actuality a region brimming with lively colors, scents, aromas, and flavors.

This vibrant atmosphere gains much from its proximity to the sea, with its islands and islets, and a coastline characterized by a thousand unique facets.

Gallura: What’s in a name?

The Gallura region likely finds Hebrew origins for its name.   Galil, meaning the country of great heights, can be found heading towards the island’s interior.  You’ll find the River Coghinas to the west, and an invisible line to the south, linking Mount Limbara with the small Tyrrhenian coastal town of San Teodoro.

Gallura is a true paradise for archeology enthusiasts.  Throughout the area, traces of passing cultures and civilizations, like the pre-Nuragic, Nuragic, Punic, Roman and Medieval societies, are easy to explore and discover on the island’s grounds.

Gallura is also affectionately referred to as the Switzerland of Sardinia, thanks to its green lands that stubbornly remain florid and verdant throughout the year.  But the comparison is also thanks to the area’s natural order and peace that are palpable enough to rejuvenate even the most frenetic visitor.

Gallura’s Unique Dwellings Worth a Visit

The Gallura region is home to a unique feature, and one not found anywhere else in Sardinia.  Dotting the landscapes, we find a series of Stazzi, or agro-pastoral farms typically featuring single-family homes.  The Gallura Stazzi are generally self-sufficient, and originally constructed by both local and external shepherds migrating from Corsica during the 17th and 18th centuries.

A typical Stazzo will feature a rustic home built in the center of a plot of land with varying dimensions.  The land is almost always a wooded area, part of which is reserved for the cultivation of local grains for both human consumption and wild grazing for animal livestocks.

The Stazzi also typically consist of areas where livestock are groomed and raised, including a sheepfold for sheep and goat breeds typical to this area, stable areas for both bovine and pig stocks.  An area dedicated to vegetable gardening and vineyards is also typically included in a Stazzo.

3 Must-See Things to See in Gallura: 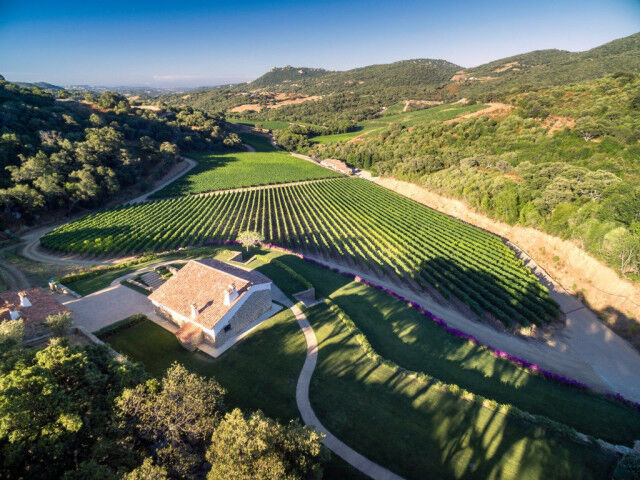 Is it True Gallura is Much More Than Just Beaches?

Granite rocks are the geological element that characterize the Gallura landscape more than any other feature, including beaches.  Smooth and curved, or jagged and serrated, these rocks have been formed by generations of erosion by wind and rain.

The granite rocks today have taken in a semblance of miniature mountains and other extraordinary natural carvings and sculptures.  Ranging from white to dark gray, from red to pink-hued all the way through a subdued green, the granite rocks have a long local history.

Dating back to at least 300,000 years ago, the granite rocks found in contemporary Gallura are often the companions to particularly crystalline rock schists with an even more ancient background.  We can find an abundance of these geological formations in the northern part of the Valley of Coghinas, as well as in formations near the Gulf of Oranges (Golfo Aranci).

In the areas near Capo Testa and north of Trinità d’Agultu, further geologic marvels abound.  Limestone boulders and plates of volcanic tuff containing fossilized wood can be found.  These elements further contribute to an already exciting natural color palate, and can be enjoyed during just about any hike into the tempting landscapes.

Into this exciting, colorful palette, we also find thriving oak forests.  From these towering oak trees, cork, also known as “soft gold,” is a strong driving force in the local economy.  Both artisan and industrial processing of regional granite and cork sources are fundamental drivers in the area’s economy.

The traditional cuisine of the Gallura region reflects an overarching Sardinian culinary theme:  simplicity, seasonality, and the incorporation of local, essential ingredients.  Based primarily on locally-cultivated ingredients, the region’s flavors can be strong and unexpected, but they always result in tasty, indispensable combinations.

While our first mentioned dish does have its roots in peasant food, the Zuppa Gallurese (or l'u pan'a fitti) has evolved into one of the region’s typical dishes par excellence.  Today, the soup is also called a suppa cuata or suppa pasturina, and can be found gracing both farmhouse dining tables as well as on menus of traditional restaurants specialized in regional cuisine.

Homemade bread piled with fresh cow’s milk cheese is neatly arranged in a pan in alternating layers.  Each layer is subsequently sprinkled with fresh Pecorino cheese and chopped parsley.  Scaldingly hot meat broth is then poured on top of the bread and cheese layers, and the concoction is then allowed to cook over a very low flame.

The end result is a crispy layer of cheese concealing a tasty, rich soup.  The soup is served at a slightly reduced temperature, and is generally accompanied by a red or rosé wine.

Other first course specialty dishes include fà a oglia, a soup created from broad beans and lard, Li Pulilgioni, the excellent fresh ravioli filled with Ricotta cheese and then seasoned with lemon and tomato sauce.

Staying within a pasta-focused theme, the local Chjiusoni, or gnocchetti, as well as the local Fiuritti, or tagliatelle, are both pasta selections worth a look.  Crafted by hand, these pasta shapes are made with stone-ground Sardinian durum wheat, and water from the local Monti di Deu springs.

For cooked meat dishes, specialties include wild boar cooked in sweet and sour sauce, and the inevitable Porceddu, a roasted suckling pig mounted on long skewers, and grilled over aromatic wood chips.

The Gulf of Olbia is home to the lagoon’s fabulous mussels, as well as the sea urchins of Castelsardo.

Gallurian, and most Sardinian desserts, are almost always small masterpieces of fantasy and sugary whims.  Elaborate creations require passionate, devoted bakers not afraid of disproportionate use of sweeteners like honey.  Almonds, walnuts, and hazelnuts are also common ingredients in these delicacies.

Mazzafrissa instead is a specialty dish that is quite versatile.  A blend of cream and semolina, the Mazzafrissa can be transformed into a dessert when paired with honey.  Alternatively, the result can be savory when salted and served as a puree.

Where to Eat: 3 Local Farmhouses

Where to Drink: 3 Local Wineries 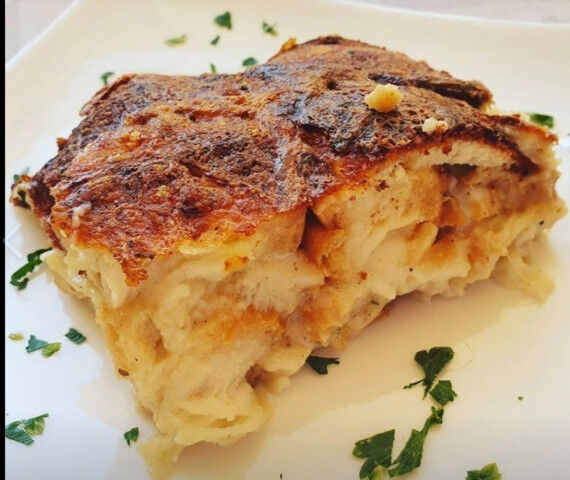 Wine-making in Sardegna’s Gallura region dates back to approximately 1400 B.C.  The Vermentino varietal was likely imported by the Spanish rulers around the 1700s, although Vermentino grapes do seem to have some Eastern origins as well.

Curiously enough, the Gallura region is the last area in Sardinia to welcome this grape, even though the Vermentino varietal has a long history of producing excellent white wines locally.

One of the final grapes to arrive into the Western tip of Sardegna, in the heart of the Olbia-Tempio province, Vermentino likely made its way to Gallura via Corsica in the last decades of the 19th century.

Following the first plantings of Vermentino in Gallura, in its very northernmost limit, the Vermentino grape then spread throughout all of Sardegna’s main wine areas, including Sassari and Cagliari.  The local DOC was approved in 1975, followed by the DOCG approval in 1996.  The final modifications of the wine-making legislation dates back to December 20th, 2011.

So, what is so special about this wine?

What are the secrets to its success, a vine that has taken Sardegna by storm in less than 100 years?

Vermentino di Gallura has a very recognizable, distinctive personality, and is the island’s most modern wine.  For wine lovers in general, including those who don’ìt speak the local Sardinian dialect, Vermentino di Gallura provides the most easily accessed wine in the region.

Straw-yellow, with occasional greenish tones, the Vermentino di Gallura has subtle, yet intense aromas of wild flowers, acacia, and mimosa blossoms.  The flavor of Vermentino di Gallura can best be described as pleasant hints of bitter almond, and a dry, soft, slightly aromatic flavor to enjoy.

The rise of Vermentino di Gallura’s profile can be attributed to three distinct experiences:

Why is Gallura a vacation and retirement hotspot?

This complex, multi-faceted Sardinian region is the perfect blend of naturalistic elements and memorable cuisine.  The Sardinian identity is fully on display in Gallura, where you can explore a multi-layered culture resplendent with unique cuisine, captivating village festivals and folklore, and enduring craftsmanship.

A retirement in Gallura promises an elevated quality of life, widespread serenity and calm, and enticingly low cost of daily life and needs. 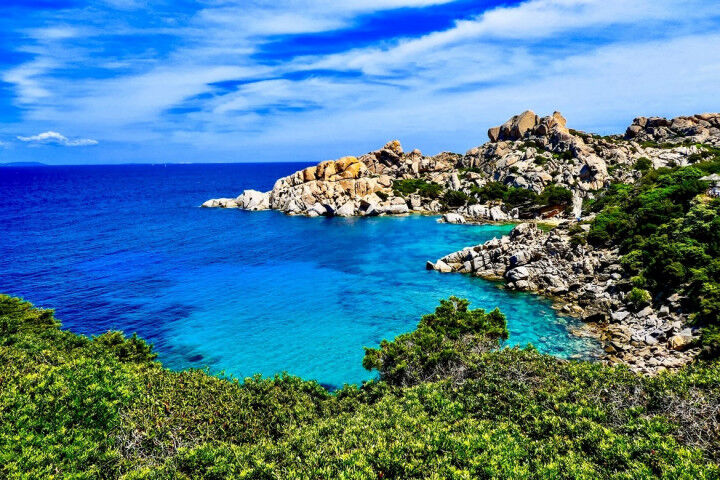