The Monks are Alright - Monks Make a Difference

Monks and the Middle Ages - What Do They Have to Do With Wine? Did monks grow vines? How did moms contribute to viticulture? 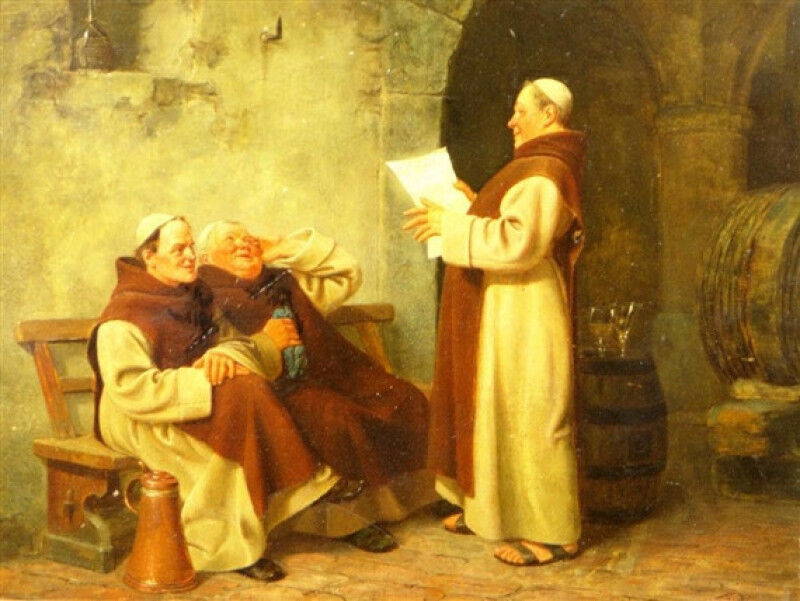 Continuing in our series of historical wine anecdotes and lessons, thanks also in great part to the thought-provoking Di Che Vino Sei by expert wine journalist and history-devourer Filippo Bartolotta, we've arrived at the era of monks in European wine production.  If you've read the previous installation detailing Roman narrative in wine development, you'll be up to speed in how vitis vinifera conquered the land known as Enotria.  With the arrival of the Germanic Goths, wine lost a bit of favour compared to more popular beers and ciders guzzled by the northern populations.

Time marched on, and the northern conquerers eventually gave way to the Byzantine Empire, followed by the Byzantine Papacy (and loads more in between), eventually arriving to the dominance of the Papal States and the Kingdom of Italy holding the power and knowledge in Western Europe.

THE RELATIONSHIP BEWTWEEN WINE AND MONKS

While some might question the relationship between wine and monks, the partnership between the starkly different worlds of religious sobriety and the bacchanalian world of wine actually has been a prolific and productive relationship for quite some time.  The collaboration between the two spheres is intriguing, and you're probably asking yourself why this relationship even exists.  While the reasons could be multifold, two primary reasons help explain this partnership.

As mentioned previously, it's logical that viticulture and wine itself was a prized element in religious worship.  Another feature of viticulture and viniculture however was in providing the right field to follow - monasteries had the physical land to harness (and make productive), they had generations of previous testimonies and first-hand knowledge to build on (especially if they were the only ones at the time and era who knew how to read), they had captive labor resources right at their fingertips (monks themselves and additional feudal laborers), and the ability to store and sell their products as a way to bolster the monastery's direct funds.

They also were part of a vast, stable community emphasising perfection of even the smallest chores as a way to pay homage to their god.  One more super-important factor: health reasons - easy to forget in our modern day of clean accessible drinking water.

While grabbing a glass of water is something we do every day, this of course couldn't have been the case for the average Medieval citizen, who often faced debilitating or mortal disease by drinking nearby ground water.  Happily enough for us, monks encouraged drinking wine, beer, and spirits as defense against these ills.  The addition of even a small amount of alcohol into drinking water could prevent future pandemics and water-borne illnesses, certainly spreading the word about alcohol's good side.

So now that we know why monks refined the wine-making process, we have to ask what exactly did they refine?  What new techniques were being enacted, how did they get to these innovative processes when the Dark Ages weren't exactly synonymous with being a time of florid learning and innovation?

From written and artistic records left by these inquisitive early vignerons and merchants, we know that monk's studies focused on refining, honing, stimulating growth, ageing, expanding sales, and more - all aspects providing priceless research and development for modern wines and wine industries.  While there were certainly monastic communities throughout both the Middle East and Western Europe, the most prolific areas were in the Mediterranean basin, concentrated specifically in France and Germany.

In our subsequent read, we’ll take a deeper look into the world of the French monks, who are largely responsible for our information today.  Without their priceless contributions, we’d be hard-pressed to know the specifics of their day.  Let’s keep adventuring in the past - we can learn more about our present this way!