The San Domenico restaurant in Imola, in the Emilia-Romagna

Eating in a starred restaurant is a pleasant experience but the one at San Domenico di Imola is a completely different thing. 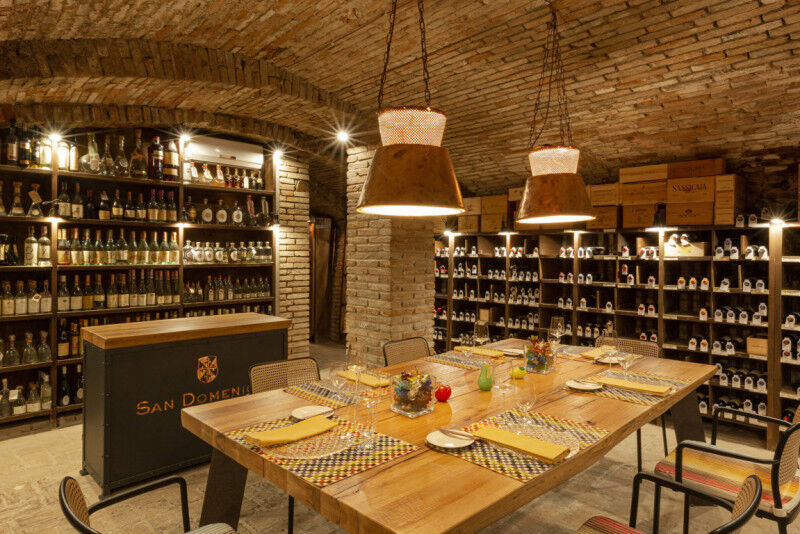 The San Domenico restaurant in Imola, in the Emilia-Romagna region, one of Italy’s temples of top-quality food, represents an unique facet of top Italian haute cuisine and food history.

The restaurant highlights the impeccable technique and vibrant passion of Chef Valentino Marcattillii, who evolved his capabilities alongside the tutelage of the mythical Nino Bergese.  Today, Marcattillii is flanked by the skillful Max Mascia.

Their creations continue to delight their guests' international palates in a dining room, whether indoors or outdoors in the warmer months, that continues its ability to make one dream.  San Domenico is a restaurant with few equals.  This superior experiential level is thanks in part to the quality of the staff and their attention to details upon arrival to the restaurant.

Also playing a role in San Domenico’s exalted experience is its ability to interpret solid roots with the region’s cuisine, along with its magnificent cellar.  The cellar’s refined labels are further augmented by the structure’s memorable architecture.

The birth of Ristorante San Domenico

In 1970, banker Gianluigi Morini was inspired to emphatically change his career, leaving the bank and founding San Domenico. His dedication and dream became the ultimate symbol of Italian restaurant history.

Why select San Domenico for the name?

Morini selected the name San Domenico as it imparts the notion of a convent, a site special to Morini as he was actually born in a Dominican convent in 1935. Morini immediately sought the best for his enterprise, enlisting the culinary services of Nino Bergese, the “Cook of the Kings.”  Bergese, alas, while cultivating an endless talent, was overlooked during his time.  In the 1960s, Bergese implemented the cuisine of the noble houses, and proposed his own interpretations of a regal culinary approach in his restaurant, “La Santa,” located in the northern port city of Genoa.

Why select San Domenico for your meal?

San Domenico demonstrates that every detail is considered with an immense level of care and conscientiousness.  Nothing is left to chance, from the kitchen organization to the dining room service, all the way down to the details of the restaurant’s extraordinary wine list. From the yellow silk lining the restaurant walls to the interior’s dark brown plush leather sofas, with the English linen-lined ceiling designed with naturalistic themes by William Morris, the San Domenico exudes charm and grace from every angle.

Contemporary thonet chairs paired with vintage silverware and plates make for a pleasing visual harmony in every surface of the restaurant.  The restaurant’s decor is inspirational and visionary, and will surely be the spark of a “creative revolution” based in food and drink that we’ll see unfold at the finest of Italian culinary establishments.

The tale of San Domenico: Italy’s most long-lived 2* (Michelin) restaurant

The restaurant’s first years of existence, in the early 1970s, represents a period of gastronomic experimentation.  We see the development of the kitchen from a primary focus on experimentation, heading towards a greater notion of elegance.

Morini himself notes, “great cuisine is by birth an international phenomenon.  Traditional cuisine far too often falls into regionalism, and for too many centuries, Italy has been closed and divided individualistically. The circulation of ideas, and of ingredients, which ultimately serves to boost the development of cooking, has been entirely absent.” It’s worth remembering the local Italian historic context wherein San Domenico is laying down its roots.

We’re in the Boom era, where quantity trumps quality every time.  How much is being consumed is more significant than what is being consumed. Resources were primarily directed at private purchase of cars and vacation homes rather than perceived costly meals in restaurants.   In this climate of consumer excess, we find Nino Bergese taking the lead in teaching  Valentino Marcattilii, the young chef entrusted with the leadership of the San Domenico kitchen. 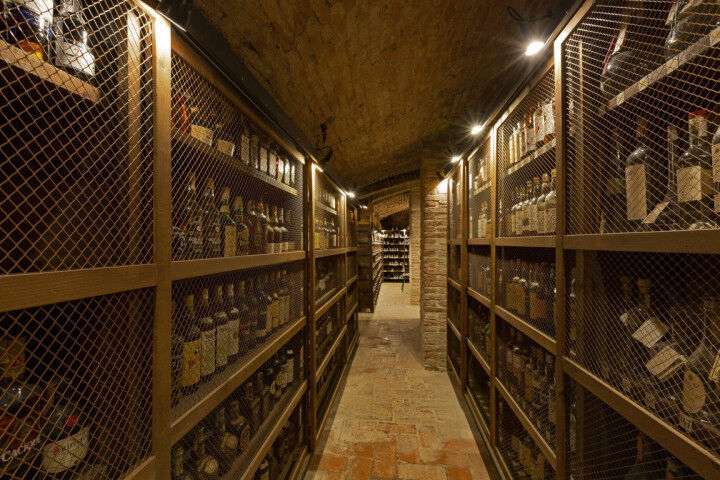 What was being passed on to Marcattilii?

A full-immersion hands-on learning experience including correct doses and measured madness needed in the creation of provocative, memorable dishes. This guidance ultimately led to the continued expression of precision and value in both the kitchen and dining room.  Today, Natale Marcattilii, Valentino’s brother, still follows these tenets in the dining room service execution.

Max Mascia: a Memorable Mix of Enthusiasm and Kitchen Talent

51 years of activity have brought their fair share of triumphs to the San Domenico team.  This equippe is fortunate to include Max Mascia (born in 1983) as part of its kitchen lineup.  Valentino’s grandson, Max was raised in the restaurant and has spent endless seasons refining his skills therein. Max’s sunny, humble, and very determined character helped him gain experiences in some of the finest kitchens in the world.  Max’s experiences include working alongside Alain Ducasse in Paris, and the Plaza Athénée on the French Riviera.

Following these hands-on learning adventures, Max was given the go-ahead from his uncles and family to assume a leadership role at the helm of the San Domenico restaurant.

Max’s youthful enthusiasm has earned praise from the ranks of assorted restaurant critics and guests alike, who all recognize his great ability to carry on with the restaurant’s fundamental values.   History, culture, elegance, and a thrilling ride all await guests when dining at San Domenico.  These sensations are further experienced when Max engages with the guests directly at their tables, providing the mind with another visual and culinary gift. Max’s cuisine continues to excel as he gains more and more experience.  His signature dishes are well-conceived, and presented with impeccable technique and lively passion. When partaking in a joyous San Domenico culinary moment, we sense a genuine culinary journey.  To quote Italo Calvino, this journey is “not replaceable or substitutable.”  Instead, we encounter a tale of flavors, complete with an innate curiosity that welcomes culinary techniques and products from other cultures.

As to be expected, their level of excellence in the restaurant’s classic, signature dishes is notable.  Tried and tested crowd favorites include the stunning “San Domenico egg raviolo,” a superlatively successful evolution of classic Italian filled pasta that Max has adjusted to include seasonal truffles.

The kitchen team continues recreating other classic dishes, like the Risotto with Toasted Onion, Pan Juice Reduction and Caramelized Cane Sugar Jus.  We also can find the immense Savory Liver Terrine Strudel served with Port Gelatin and Brioche-bread Toast.  Lest we forget, San Domenico also produces some of Italy’s finest foie gras, so this dish is a clear nod to this specialty.

Diners can also opt for a more modern San Domenico solution, where the subtle mastery of the creative process also shines through in dishes that feature a lean number of top-quality ingredients.  The Amberjack with Cervia Salt, the Grilled Scallop and Roasted Sea Bass slice are also testimonies to the creativity and simplicity revolutionizing the San Domenico menu without sacrificing any of the restaurant’s historical, signature dishes.

What makes these contemporary dishes so enticing?  Because the ingredients are exalted and dignified by the chefs’ careful attention to quality and healthful elements.  The dishes are prepared with the maximum respect towards the essential building block fundamentals of healthy food 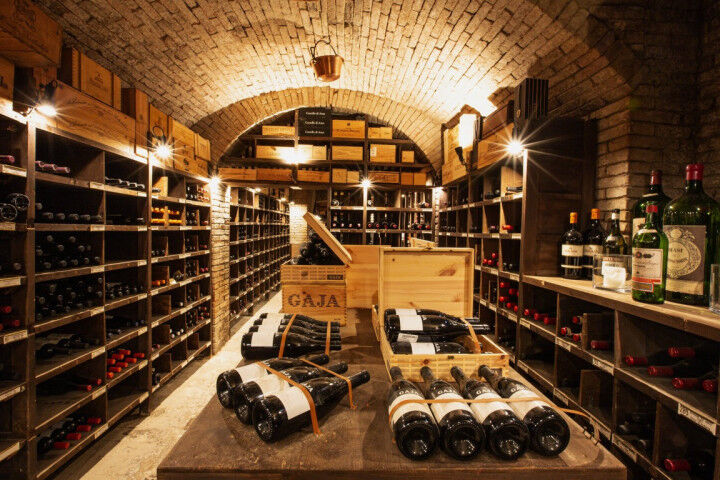 The Wines of Ristorante San Domenico

Last but certainly not least, the San Domenico wine list is absolutely encyclopedic in its scope.  It would be a crime not to visit the cellar during your visit to the San Domenico restaurant. Built on the foundations of an ancient Roman domus, the cellar is a bewitching space containing more than 15,000 bottles representing nearly 2400 individual labels.  The wines of the Piedmont (Italy) and Piedmont and Burgundy are the areas that the San Domenico team favors.  However, all the greatest crus from Italy and France are represented, as well as an extensive selection of valuable distillates.

One Beautiful Contrast between San Domenico vs Italian Michelin-starred Selections

Dining at the San Domenico restaurants exudes a welcoming ambiance of being right at home, which often is a stark contrast to contemporary solutions that rely heavily on design rather than substance.  San Domenico seems to provide a dream-like atmosphere, the ideal location to dine with close friends as if you were inside a private, exclusive dining club

As soon as you cross the threshold of the San Domenico Restaurant, you instantly are transported to an arena where the teamwork behind the young San Domenico brigade is palpable.

San Domenico is transformed from an aura of Michelin-starred standing to a vibrant, warm trattoria in the busy city center square.  The restaurant takes on the role of the perfect place to socialize with new and old friends, enjoying your surrounding company while tasting reasonably-priced top-tier dishes.

The Links Between San Domenico and Imola

The San Domenico restaurant is closely linked to the story of the Enzo and Dino Ferrari Autodrome in Imola.   Two genuine Italian icons, one in the world of haute cuisine and the other in the world of luxury motors.  Since the 1970s, both realities have been working side by side as they write passages of important Italian living history Between 1980 and 2006, the San Domenico restaurant hosted at least 27 Formula 1 Grand Prix drivers and staff.  These notorious guests fatefully helped write the history of this unique Italian culinary destination.