The production of handmade Sicilian Pasta is based on natural principles that have been handed down for generations. Pasta produced in Sicily is a food made from semolina or flour of different extractions, which is then divided into small shapes (Sicilian busiate) to be cooked in hot water and salt 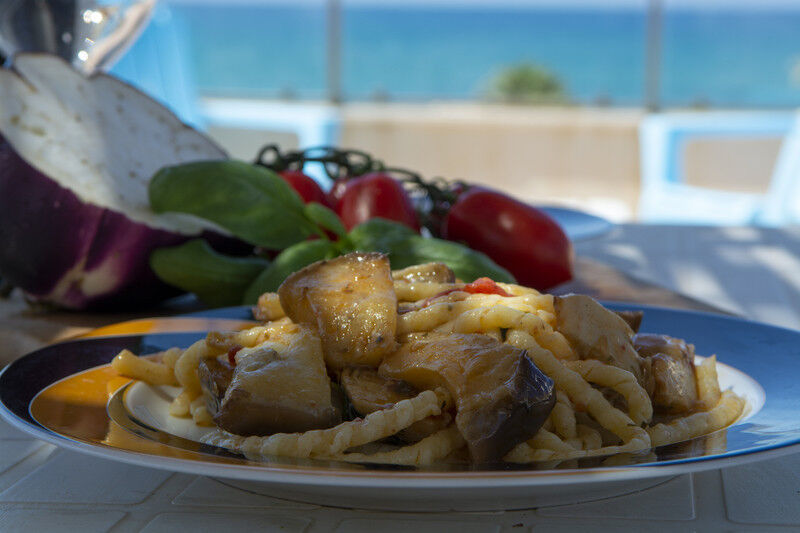 Pasta Sicilian: The Best Pasta Recipes For Any Occasion

What pasta comes from Sicily?

If you say pasta, you say Italy. That’s a sentence that is difficult to dispute. But if spaghetti have the upper hand over  macaroni in epitomising the Belpaese, in reality the question is much more complex, because there are dozens and dozens of pastas, each region has a huge variety, and there are hundreds of recipes for each type. In short, an encyclopaedia dedicated to the subject would still not be enough to cover everything. So, let's choose a place to start and go to Sicily, a land devoted to wheat, without which no pasta would ever exist.

Sicily, the island where dry pasta was born

Pasta is an invention of a settled lifestyle, because man had to stop his migratory life, and learn how to sow and harvest crops. This is where the transition to wheat came about, with the hunter becoming a farmer; however, we have to wait until the 11th century to find pasta as we know it, when the Arab dominion, among its many important legacies, brought dried pasta to Sicily. It was in Trabia, at the time an Arab hamlet not far from the town of Termini Imerese, where the first evidence of pasta was found: the Arab geographer Idrisi speaks of 'an important pasta production centre in the form of threads', linking it to the pre-existing milling activity. It was from here that dried durum wheat pasta conquered ‘the Boot’, passing via Naples and reaching Genoa, to cover the entire Mediterranean basin.

The relationship between pasta and the sea is, in fac,t very solid, as we should remember that both Sardinia and Puglia were strong adherers from the 14th and 15th centuries. Specifically, pasta left the island of Sardinia to reach Barcelona, Majorca and Valencia, but also Genoa, Naples and Pisa. And there is also a curious fact about this connection: Sicilian ship captains were authorised to take between 10 and 30 rolls of macaroni and vermicelli 'for personal use' during their voyages. The same custom was also in use in the port of Genoa.

It was in the seventeenth century that pasta had its true consecration. Moving up the peninsula, it became the main food of the Kingdom of Naples where famine (meat and bread were scarce) contributed definitively to making it the main dish of the people. In Naples, dried pasta began to be produced, while in northern Italy (except Liguria) the tradition of fresh egg pasta was maintained. This was mainly due to climatic reasons as only a dry and windy climate favoured drying techniques).

The many types of dried pasta and recipes found in Sicily

In Sicily, dried pasta was a luxury reserved for special occasions, such as engagements or weddings, for which maccaruna 'i zito (boyfriend's macaroni), or simply ziti, was 'obligatory'. Even the condiments drew - and still draw - from local produce and the land: ricotta, courgettes, aubergines, broad beans and peas, but also pumpkin flowers or tenerumi - the leaves of the long courgette.

In Sambuca, if there was nothing in the larder to serve as a condiment, pasta l'amore di Dio  (God’s love) was made. It’s a soup of cappellini or spaghetti cut with peeled tomatoes and onion. Sicily is a place of the sea, but if the sea was too rough to fish, in Syracuse people used to prepare pasta 'ro malutempu’ (of bad weather), and in Marettimo pasta cu' pisci fuiùtu (with fish that had run away), both dishes that did not involve fresh fish. In Trapani, fishermen sometimes used stones as a seasoning for soups. Cooked with pieces of rocks taken from the seaside, the stones coated in moss added flavour to the dish. This is the origin of a very famous dish, spaghetti allo scoglio, where 'scoglio' now stands for 'rockfish' rather than ‘rock’, thus losing its literal meaning. 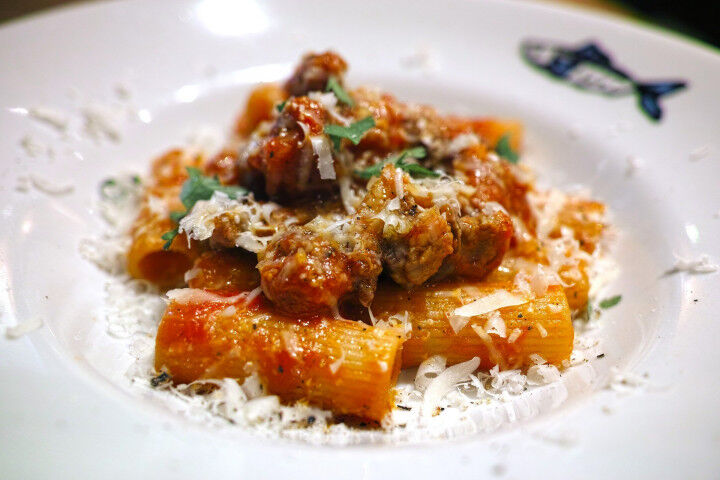 What is the most popular pasta in Sicily?

Do you know anelletti - those little rings of pasta that look like little doughnuts with a hole in them? In Sicily they have always been one of the most widely used shapes, especially for timbales , pork pies, peas and local cheeses, eaten mainly during the summer. They are therefore also eaten warm and it is not unusual to see trays of anelletti on the beach, eaten during the long summer days under an umbrella. It is a dish that is synonymous with Sundays, family lunches, picnics and parties. There are many versions of this dish; practically every family has its own, which it jealously guards as a legacy to pass on to its heirs.

Another shape that is always in vogue is the busìata, strands made with water and semolina that take this specific shape because they are rolled on a wire, thus obtaining a perforated spaghetti. It has ancient origins, dating back to the year one thousand, and the term derives from the Arabic bus, which indicates the thin rush that grows wild in the meadows. It is served with different sauces according to local traditions and because of its porous and rough surface it goes well with pesto, both white and tomato.

Couscous is Sicilian, with clear Arab influences. It is a coarse-grained semolina that is 'incocciata' -  that is,  shelled by hand or a fork, adding a little liquid. It is then steamed in a pignata – a form of clay plot. This is a long and ancient ritual that is still performed according to tradition in south-western Sicily, where the presence of North African communities is very important. There is also a sweet version, prepared by the Benedictine monks of the Monastery of Santo Spirito in Agrigento.

Taccuna de muline, or taccuna, is irregularly shaped and prepared with corn or wheat flour and water. In Sicilian dialect, taccuna is a’ toppa’  or ‘patch’ and the dish is seasoned with garlic, oil and chilli pepper or the inevitable ricotta.

Zito, as we have already said, means fiancé, but it is also a type of pasta that is prepared especially for the Epiphany. They are smooth perforated sticks also known as "the bride's macaroni", because in the past it was customary to take them as a gift to the neighbours of the betrothed as a sign of good luck. Of all the pastas, suddhi is certainly the least well known.

It is typical of the province of Syracuse and is made with barley flour, salt and water and is shaped like tagliatelle. A favourite condiment is a pork sauce. Finally, the maccaruni, also known from the sumptuous Sicilian timbales - one of which was featured in ‘The Leopard’ ( by Giuseppe Tomasi di Lampedusa, film by Luchino Visconti) - which are eaten at Christmas, as well as at the feast of St Joseph (San Giuseppe) in Palermo. They change in shape and size according to the recipe, but it is essential that they have a hole. 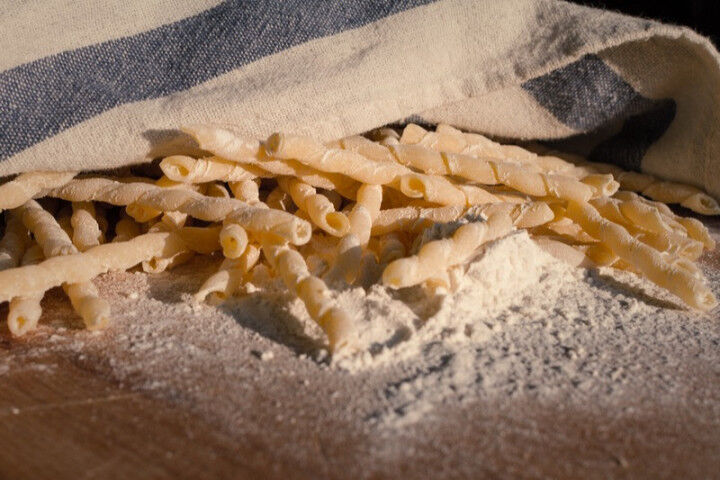 Let's stay on the island, since the choice of wines is vast and changes according to latitude and longitude. There are numerous indigenous grape varieties, either pure or blended with international varieties.

Here you will find lots of recipes for typical Sicilian pasta dishes, from the simplest, such as ‘pasta alla norma’, to the most elaborate, such as ‘anelletti al forno alla palermitana’ or’ pasta 'ncasciata alla messinese’. 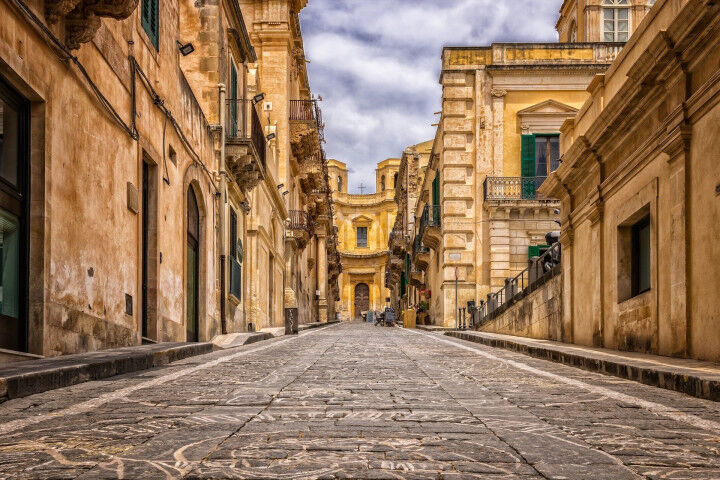