Holiday food is always a wonderful treat, but when you toss in the delicious fried finger foods focusing on the sweet world, there’s just very little not to get excited about here. Italy has a rich history of specialty foods that we all adore, and the Carnevale time just before Easter is no exception to the rule. A building block sweet delicacy known as Chiacchiere is omnipresent throughout the country, with variations from region to region. But it’s not the only one - let’s learn them all here and get ready to start day-dreaming about these gourmet tidbits! 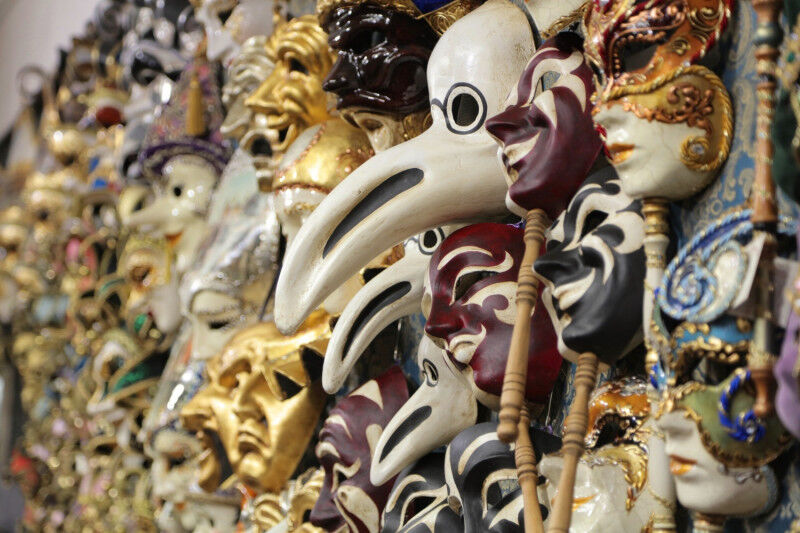 FEAR NOT A CARNIVAL INDULGENCE (OR THREE)

Raise your hand if you find the expression “the odd overindulgence” annoying, with its punitive implications and direct genesis from Diet Culture.  Why should the enjoyment of rich, caloric food automatically imply guilt and negativity?

From a historic perspective, the days when this very philosophy was a way of life and not just a metaphor are not so long ago:  the Biblical deadly sins include gluttony, and a frugal diet has long been viewed as part of a pious way of life.

Excesses then, in following this pattern, had to be rigidly framed in a religious context and calendar - this is why Italian Carnival sweets, as part of feasting times preceding Lent, are amongst the most generous in their influence on Italian culture.

The Latin proverb, semel in anno licet insanire, loosely translating into “once a year you can go mad,” reminds us of the link between Carnival and  the Roman tradition of Saturnali.  In short, both cultures were giving their consent to go a little crazy once a year, but added to that statement should also be that it’s acceptable to also “knead” and “make bread” once a year, as the common underlying element of these Carnival traditions is indeed, making dough, and gloriously deep-frying it. Following classic Italian traditions, the fried dough is often dusted with sugar, or drizzled with honey.

Many of these traditional sweets resemble each other closely - even if their names are different, relative to their region of provenance.

In just about all nooks and crannies of Italy, we can find chiacchiere - each region has its own name for them.

Lombardy goes with chiacchiere, Tuscany opts for cenci, Emilia-Romagna  instead calls them frappe, Trentino refers to them as cròstoli, Piedmont opts for bugie, and the Veneto area has nicknamed them instead as galani.  They’re all the same sweet, but as Shakespeare wrote:  a rose by any other name….Each region clearly believes their rose smells the sweetest!

ARE CHIACCHIERE REALLY THE SAME FROM REGION TO REGION?

The basic recipe for chiacchiere is the same from place to place:  thin strips of dough made with flour, butter, sugar, vanilla, eggs, and sometimes a drop of liqueur.  The dough is then fried and sprinkled with powdered sugar, a most delicious treat.

The most dedicated chiacchiere devourers might be able to identify small differences: Veneto-area galani, for instance, could be be thinner than Milan-style chiacchiere from Milan. And in order to meet client preferences, the Sartori pastry shop in Erba (a charming small town nestled  between the shores of Lake Como) prepares both versions.

Whatever the contemporary presentation, chiacchiere are at heart an ancient Roman sweet, called Frictilia, prepared in preparation and celebration of Saturnali.

Today’s options are more frequently extravagant versions, involving rich chocolate coatings.  Alberto, Farinelli, master of the Perugina School of Chocolate, has created a particularly decadent version for this year: Chiacchiere Golose, a crumbly pastry dipped in chocolate cream, in a combination that recalls the classic churros of Spanish tradition.

The squiggles that characterize chiacchiere, running alongside the edges of the dough actually have a purpose beyond simple decoration and regional identification.  The shells created along the edges of the dough actually let air escape during cooking, and avoids air pockets and bubbling from forming during the cooking process.  Without the squiggly edges, chiacchiere would have a more pancake-like appearance.

CASTAGNOLE - NOT AN ACTUAL CHESTNUT

Throughout the country, we find another Carnival delicacy, aptly called Castagnole for their shape and size that immediately recalls the classic chestnut.  These treats are small, round pancake-like sweets rolled in granulated sugar while still warm so the sugar coats the Castagnole most deliciously.

The treats can be left empty inside, or can be filled with fruit jam or pastry cream, or in a particularly decadent version, filled with dark chocolate cream.

Milan offers its own take on the Castagnole, locally called Tortelli or farsòe in Milanese dialect when prepared as indicated above.

The Milanese take it a step further however:  by adding diced apples to the soft dough, the treats transform into laciaditt.  For the first time in history, the famous pastry shop Martesana offered this variation to great success.

Carnival sweets and the tradition of preparing and enjoying them harkens back to a celebration of Saint Joseph, the Biblical father of Jesus and husband of Mary.  The traditional celebratory date where sweets are consumed en masse is March 19th, with a wide array of different sweet treats.

Food historians Lydia Capasso and Giovanna Esposito, in the fascinating Santa Pietanza (Guido Tommasi Editore), a book with recipes dedicated to the traditions and celebrations behind the Saints nominated each day on the Italian calendar, report Joseph’s situation as being a bit in difficulty when faced with visitors, so much like our own selves with an unexpected dinner party on the horizon.

According to Capasso and Esposito,"there are those who say that Joseph, awaiting a visit of highly respected guests, the Three Kings, found himself without everything necessary to honor them traditionally.  In order to receive them with some dignity, he prepared some improvised pancakes.

Others narrate that the holy man, reduced to poverty, and having to maintain his family during the flight to Egypt, made a virtue of necessity transforming himself from a carpenter into a skilled pancake maker.”

Whatever the actual story, poor Joseph does share this wealthy tradition with the arrival of Carnival, which does come just before his own feast.  All the glorious frying and sugaring provided people with the perfect occasion to break their Lent.

As a result, in Naples, we find the infamous zeppole di San Giuseppe already in full swing during the Carnival period:  fried soft doughnuts covered in granulated sugar, or, even better, filled with vanilla pastry cream and preserved black cherries - as tasty as they are attractive visually! 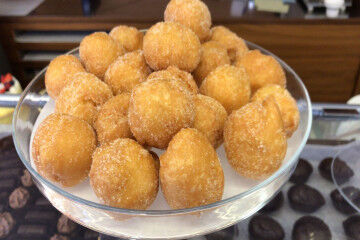 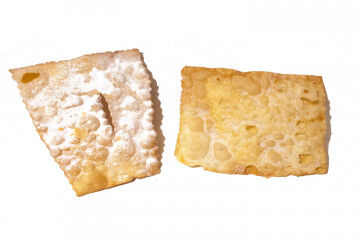