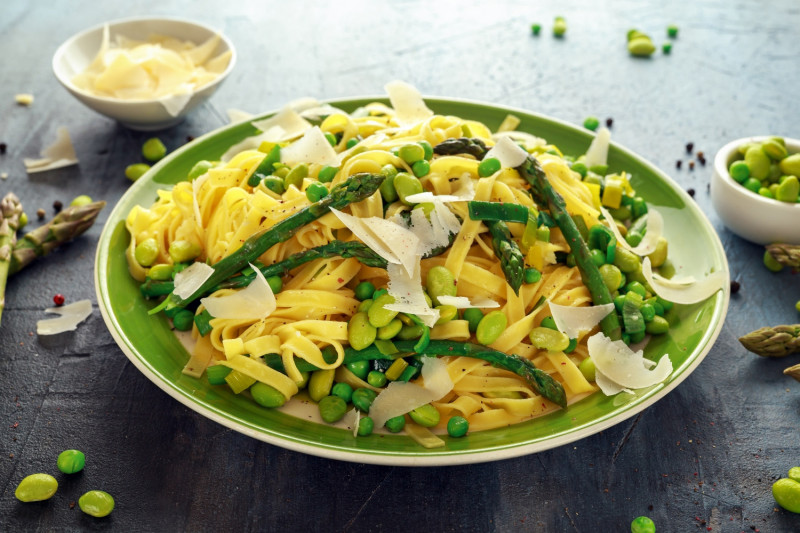 Make the most of seasonal spring veggies and fresh pasta noodles. Learn to bring flavor, nutrients and Italian vegetable goodness to your handmade pasta dishes.
Add to favourites

Pasta primavera is a real family favorite, and this recipe makes it so easy to pull it all together. The veggies couldn't be easier or come together...

Sometimes referred to as Pasta Primavera, the Mamablip chef team loves cooking seasonally, and springtime brings about such a plethora of seasonal green vegetables that we very much have our pick of a bumper crop every time we head to the local markets. As such, including gorgeous veggies like artichokes, asparagus, fava beans and more is a simple task and one that will help you incorporate loads of vitamins and minerals your body needs every day, especially as we approach warmer months.

The idea with this classic Italian vegetable pasta recipe is to keep cooking times minimal and a simple approach maintained with the goal of keeping as many nutrients within your vegetables. A short sauté with extra-virgin olive oil and just a hint of spicy garlic make this Tagliatelle with vegetables recipe a classic Italian dish to add into your classic Italian pasta rotation. And if you don't add it in, your loved ones will be sure to request it on a regular basis!

If you love cooking with classic Italian vegetables, be sure to check out our Blog articles for further information on traditional, seasonal Italian vegetables. And get some cooking inspiration starting with the Mamablip recipe for Handmade Pasta dough prep some in advance and make your Pasta recipes all the quicker and easier to prepare ahead of time!

Sign up below for the Mamablip newsletter, with weekly fresh Italian recipes, news and food tips delivered directly to your inbox!


4 steps to complete the preparation

Sift flours on working surface, and form into a mound.  Make a well in the center.

Break in eggs, add a pinch of salt, and beat lightly with a fork.  Gently draw in flour without allowing eggs to escape.

Once eggs blended with flour and no liquid remains, start to knead dough, until soft and elastic, and isn't sticky any longer.

Work with clean hands (brush off any dry bits of flour) and eventually dust hands with more semolina to avoid sticking.

After about ten minutes, once dough is smooth and silky, wrap in plastic wrap or in cloth and let rest for 20 minutes at room temperature.

After fresh tagliatelle dough has rested, you can roll it with a rolling pin or with a pasta machine.

Divide dough ball in 2-3 pieces; keeping pieces not currently being worked with covered (to avoid the dough from drying out).

If using a rolling pin, roll dough out on floured board to reach 1-2 mm thickness. Work from center out, until you have an even surface. Regardless of rolling method, it's important to work dough well, rolling and stretching to desired thickness.

If using pasta machine, pass at first through thickest setting, 2-3 times, folding dough over itself.  Keep moving on to next settings, rolling dough through each of them until you get to second thinnest setting, in order to have thin sheets of dough.

Cut stretched dough into strips, either using pasta machine cutter or by hand.  To proceed by hand, fold each sheet several times over itself (dusting each fold with flour to avoid sticking) and cut it with sharp knife into strips about 0,5 cm wide. Unroll each strip into fettuccine. Layer them on a tray sprinkled with more semolina (or rice flour) to avoid sticking.

Finely slice all of the vegetables indicated for seasonal vegetable sauce, removing tough outer leaves or stalks, set each vegetable aside in its own small container.

Soak sliced artichokes in water with a half lemon squeezed in to prevent browning.

Finely mince all herbs and set aside.

Heat 3 tbsp of extra-virgin olive oil in large skillet, and lightly sauté spring onion with a pinch of salt.

As onion begins to soften, add carrots and sauté for a few minutes before adding the additional vegetables in the following order: drained artichokes, zucchini, peas and fava beans, asparagus.  Be sure to cook each vegetable for several minutes, stirring well, before adding the next vegetable appearing in the list above.

Season to taste with salt and pepper. When vegetables are tender (if necessary add a few tablespoons of water and let steam a bit), add minced herbs and mix well.

Drain, and add cooked tagliatelle noodles to the skillet with the cooked vegetable sauce.

Mix well and serve immediately with freshly grated Parmesan on top, if desired.

View product
About Consortium for the Protection of Wines of Abruzzo

A fresh and fruity Sicilian Grillo with a young twist.

View product
About Consortium for the Protection of Wines of Abruzzo

A fresh and fruity Sicilian Grillo with a young twist. 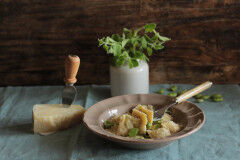 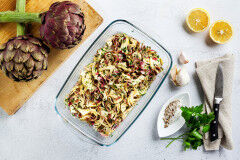 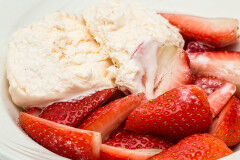 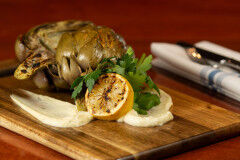 On board with spring veggie sauce

Pasta primavera is a real family favorite, and this recipe makes it so easy to pull it all together. The veggies couldn't be easier or come together with any less effort than chopping and sautéing - we can all do that in my family, so this is a great one to make for my finicky little eaters - they love it too!