Fontina Dop is the Italian gastronomic symbol of the Aosta Valley region in Northern Italy. It is a cheese made from raw, whole milk with a compact, thin, brownish crust 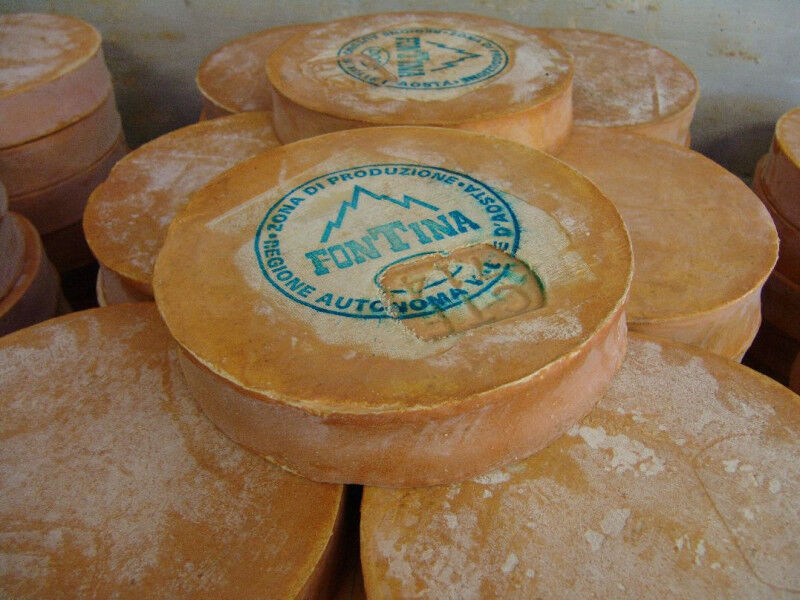 When speaking of Italian cheeses, many people know Parmesan, Mozzarella and probably Gorgonzola,  others know about Formaggio Piave, Toma. Italy however is home to may amazing cheeses. Among these a high quality cheese from the Alpine Mountains of Valle d'Aosta: Fontina Cheese. In this article we will learn about:

A History of Fontina Cheese

Dating all the way back to the end of the 15th century, Fontina cheese is a DOP product with an ancient history. The oldest record of this cheese can be found in the 15th century fresco on the walls of the Issogne Castle, a magnificent feudal residence in lower Valle D’Aosta.
Fontina cheese is truly emblematic of the Valle D’Aosta area - from time immemorial, Fontina has been the local undisputed queen of cheeses, representing the entire regional cuisine of the Valle d’Aosta.

Fontina DOP cheese occupies a truly fundamental role within the Valle D’Aosta’s agricultural system. The cheese’s role is the direct result of a respectful approach to the area’s delicate environment.

The last several years in the area have focused on important innovations that work in favor of sustainable agriculture. Moving from a more rural perspective, cheese makers have instead worked towards refining production techniques used in the creation of Fontina cheese.

The Consortium of Fontina Producers

In order to stay abreast of the current trends, the local Consorzio Produttori e Tutela della DOP Fontina, which counts 169 members and 52 additional members with roles in seasoning and packaging Fontina DOP cheese, truly throws itself headfirst into the fray. Thanks to the foresight of the Consorzio’s vision, producers are able to evolve from both an entrepreneurial and technological point of view, allowing for interventions to modernize the cheese-making structures as well as introducing frequent market surveys for product launches. 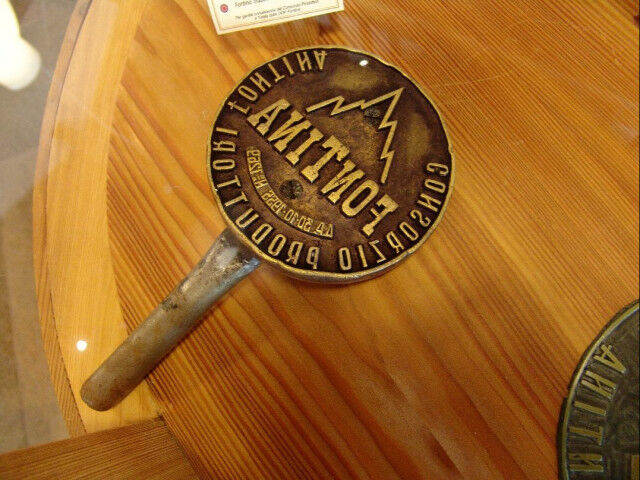 Fontina Production sales, and export out of Italy

Fontina: What’s behind the name

While there are different theories on its origins, the most popular notion ties Fontina with Fontin, one of the mountain pasture areas nearby where Fontina is produced. Another theory ties it instead to the mountain village of Fontinaz.

It could very well be connected to the French term “fontis,” or “fondis,” indicating the cheese’s paste and its ability to melt smoothly with heat.

Where Fontina is produced?

To quote the Consorzio directly: “Fontina is the Aosta Valley. This is the region the cheese was born in, and where it’s become a genuine culinary delicacy. The cheese maintains a strong connection to this territory, to these pastures, and the local cows who produce the milk from which this exquisite cheese is made.”

The lovely Valle D’Aosta is located in the direct heart of the Alpine mountain chain. The area represents an intimate haven protected from the area’s perturbations and winds that often affect the external Alpine areas.

The Importance of Mountains in Fontina Production

This mountainous region reflects a multitude of differing climates, each microclimate differing from its neighbor relative to the altimetrical factors and various segments of the mountains themselves.

The mountains continue to provide the area with protection from harsh, inclimate scenarios, and it’s thanks to this protection that a flora composed largely of valuable botanical essences can flourish. The local livestock is able to benefit from this bounty during their grazing, much to the benefit of local farmers and cheese-makers.

The Valle D’Aosta is Italy’s smallest region, with an average altitude of 2100 meters. About one third its total surface is occupied with permanent meadows and pasturelands. These areas can have altitudes of up to 3000 meters, and supplies much of the fodder used for animal feed.

These grasses and herbs are deftly able to transmit their nutritional value, flavors and aromas to the milk the cows produce. Naturally, the aromas and nutritional benefits of these healthy grasses also feature in the resulting Fontina DOP cheese.

Throughout the Valle D’Aosta area, we can locate at least a dozen separate meadow areas which differ in their native floral species, as well as in their productive potential. Each meadow also features unique levels of grass quality that appears during the growing season.

This wonderful assortment is further increased in value when you consider the even greater natural bounty to be found in the area’s Alpine pasture lands. Here we can find no less than 20 individual types of vegetation, covering a wide range of fodder options. We can find bunch grass, brachypodium, helianternus, curved sedge, sheep fescue, red fescue, cervino, alpine clover, and many more.

Fontina cheese is made exclusively from local, indigenous cattle. The breed found locally are the red spotted, black spotted and brown Valdostan cattle, all of which are strictly maintained with undiluted breeding lines.

How is Italian Fontina produced?

We know that the Valle D’Aosta is the birthplace of Fontina, and that’s is a critical local product. But were you aware that this marvelous cheese also plays a socio-economic role in the area?

The local tradition of including Fontina both in the kitchen and at the dining table is an ancient practice, both in the pastoral and touristic sense.

The local populations living in the inhospitable territory have loads of practice in creating and stretching the area’s limited resources in order to enjoy life in this difficult area. They began by breeding a local cow with very specific characteristics.

The Valle D’Aosta is the only area where Fontina DOP can be produced, and it’s one of just a handful of Italian cheeses where regulatory boards can impose a single breed of cow for making this cheese. What cow is that? The Valle D’Aosta cow, once again reinforcing the notion of a common link between territory, cows, and the composition of this particular milk.

What kind of cheese is Fontina?

Fontina cheese is obtained by processing freshly-collected whole milk from cows that have been out to pasture during the summer season in the upper pastures of the valley.

Fontina cheese features a semi-cooked paste that is pressed, resulting in an elastic, soft cheese that’s remarkably buttery during its summer production. During the summer production, the cheese also tends to reflect greater aromatic features.

How is Fontina transformed and aged?

Fontina cheese is matured and ripened for at least 80 days. The cheese is stored in deppe rock-carved tunnels. Here, humidity reaches nearly 100°, and the temperature typically hovers around 100The maturing of Fontina lasts at least eighty days and is carried out in tunnels dug into the rock, where the relative humidity reaches almost 100 percent and the temperature remains constantly around 10°C.

The circular cheese shapes each weigh between 8-9 kg, and are about 7-8 cm tall. Following a 12-hour pressing cycle, the rounds are placed on fresh spruce boards. Each day, the cheese is brushed, and turned over.

This process is repeated until the outer crust (which remains thin) takes on a traditional brownish hue. Once this ripening process is complete, the cheese rounds are then branded by the producers.

Is Fontina Cheese from Valle d'Aosta a Sustainable product?

The Valle D’Aosta maintains a florid livestock herd thanks to its most important agricultural resource: naturally-grown pasture fodders and the Alpine pasture grasses. Thanks to their favorable environmental impact, these grasses are protected and maintained in order to prevent a future loss of these plants.

Should the grasses disappear, the damage to the surrounding landscapes and water sources would be immeasurable.

The area’s reliance on the pastoral grasses found in high-altitude pastures, paired with the area’s productive breeding programs has managed to positively affect the entire production chain surrounding the Fontina DOP cheese.

The processes involved in creating this cheese have favored the use of indigenous cow breeds, selected over a course of studied time. These cattle have proven to be particularly well-suited to withstand the area’s difficult living conditions.

Like so many pieces of a delicate puzzle, each individual chain in the creation of Fontina cheese depends on the success of the step that comes before it, and the step that comes after it. The distinctive cooperation amongst all levels however, has continued to favor mankind’s widespread presence in the Valle D’Aosta.

Thanks to its genuine artisanal creation, Fontina DOP cheese is a true delight, and a healthy delicacy to enjoy. WIth its simple processing techniques, the cheese reflects a completely natural organoleptic profile.

Fontina DOP also features a high nutritional value, ensuring an excellent distribution of mineral salts and vitamins that have been proven to be fundamental in the development of calcium and cellular regeneration.

Fontina DOP is also a complete and easily digestible cheese, thanks to the presence of select milk enzymes proven to slow down the fermentation of some types of bacteria.

Last but not least, the cheese’s sweet flavors makes it the perfect ingredient for a vast selection of recipes, allowing an adventurous chef to find success in just about any culinary creation or combination.

Fontina DOP cheese is used as both a table cheese but also the leading ingredient in typical regional dishes like the world-famous Valle D’Aosta fondue, tasty Polenta concia, Soup Valpellinzese-style, and Crespelle.

What wine to pair with Fontina Cheese?

Fontina cheese matches quite smartly with select wines, where the cheese and wine complement their aromatic notes together. Love red wines with cheese? We recommend red options with delicate, light bouquets capable of exalting the flavors from the cheese’s homelands.

If you prefer white wine options, try a fresh, sapid white wine which instead spotlights the cheeses’ aromas and flavor nuances.

Three wines to pair with Fontina 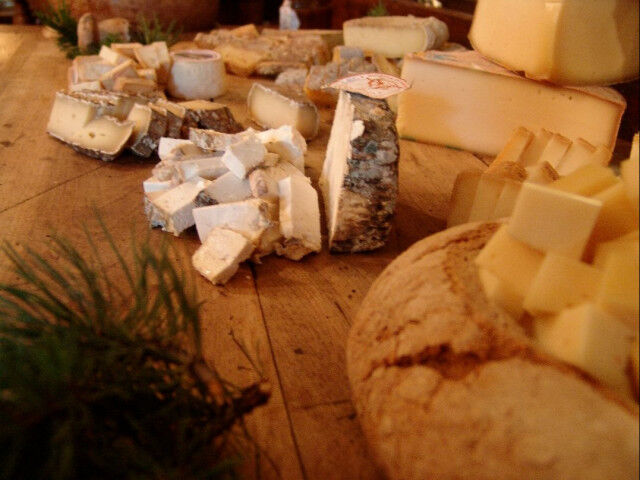