Mozzarella: a Mediterranean Cheese Sought the World Over!

A closer inspection of one of Italy’s culinary masterpieces, Fresh Mozzarella Cheese. How to recognize the real Italian item, and what makes it perfect for any meal. 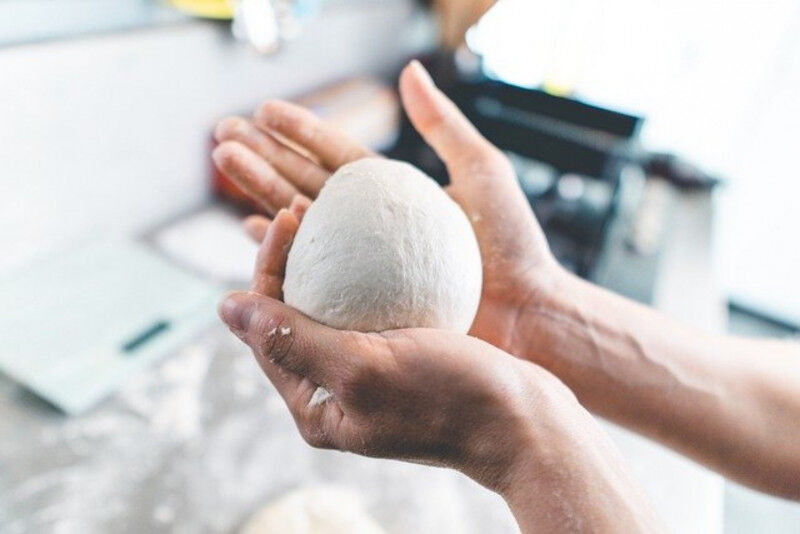 The term Mozzarella originates from the Italian verb, “mozzare.”  This indicates a production method still used in dairies today in Italy.  Essentially, mozzare is used to describe the moment where cheese curds are handled following traditional movements, where single pieces of curd are detached using the cheesemaker’s index fingers and thumbs.  The artisan simply removes smaller pieces from a larger “mother” curd.  The curds are then molded into their most common traditional shape, the rounded ball.

So Mozzarella, as you probably guessed, is a fresh, stretched-curd cheese varietal characterized by a double-processing production method.  The first process focuses on the actual cheese-making procedure, complete with its phases of coagulation, breaking, draining, forming, and salting.  The secondary phase is the curd “stretching,” or a treatment that’s done in order to make the curd more elastic and flexible.  In addition to Mozzarella, we find this process used with other traditional Italian cheeses, like Burrata, Stracciatella, and Vastedda cheese from Sicily’s Valle del Belice.

Mozzarella cheese is a classic Mediterranean product par excellence, enjoying a tradition of creation dating back centuries in warm climates, where milk is subject to rapid rates of acidification and coagulation.  Historically, milk would arrive to dairies already acidified, so much so that its only possible future lay in this precise sort of processing.  Today, the curd is allowed to acidify, and is then stretched and spun before being cut and shaped into the various forms we’re familiar with now.

CHARACTERISTICS, TYPES AND DIFFERENCES AMONG MOZZARELLAS

Mozzarella owes its international popularity in great part to its use in making Neapolitan-style pizzas.  It goes without saying that Pizza is one of the world’s most popular dishes, and Mozzarella, as a fundamental ingredient in making Neapolitan pizza, is part of this popularity.  In the United Sates, it’s even referred to directly as “Pizza Cheese.”

What’s the best sort of Mozzarella?  Industry experts, following classical regulations and stipulations, indicate that the finest Mozzarella selections are produced on an artisanal or semi-industrial level in Southern Italy.  Also known as Fior di Latte, or fiordilatte, in order to distinguish it from Mozzarella Bufala DOP, we should also recall that Northern Italy is home to an important industrial production segment of Mozzarella.

Italy is not the only country to produce Mozzarella, there are others who produce and even export stretched-curd cheese, referring to them also as “mozzarella.”   This labeling and naming process, while not illegal, is often misleading.  With the exception of Bufala Campana DOP, Mozzarella di Latte di Bufala or just Bufala, there are no indicated locations of origins of the cheese, and the externally-produced cheeses don’t have to comply with the disciplinary regulations established throughout Europe.  So while they can use the term Mozzarella, their cheeses are light-years away from being authentic, DOP-recognized cow or buffalo-milk Mozzarellas.

1998 brought with it recognition of Mozzarella, or Fiordilatte cheese, as a TSG (Traditional Specialty Guaranteed).  This recognition allows other countries to replicate the production techniques and incorporation of raw materials used to produce a specific product, and eliminates the connection products might have with designated geographic locations.   Essentially, TSG recognition allows countries outside of Italy to produce and label their products as Mozzarella without ultimately informing the consumer market about their product, making their Mozzarella labels legally-recognized on an international market scenario.

Mozzarella is typically packaged in round shapes, like ovoline or bocconcini Mozzarella balls, or braided shapes.  Mozzarella pieces generally weigh between 30 grams to about 2 kilos, and have either a smooth or shiny surface.  The crust on Mozzarella is generally very thin, and the cheeses themselves have a porcelain white color.  Mozzarella made with fresh cow’s milk is typically less chalky than their Buffalo-milk mozzarella counterparts.

Italian mozzarella is generally sold in packaging with cream or milky liquid present.  The liquids around the cheese help it maintain a high level of freshness.  Mozzarella is usually lightly salted, and when cut, release a milky liquid.  The aroma of Mozzarella is light and pleasant, due to the bacterial movement on milk’s structure.

Mozzarella’s versatility in the kitchen is quite remarkable.  Mozzarella is adaptable in many different situations, including on the grill, in the pan, baked in the oven, etc.  This cheese pairs beautifully with a wide array of ingredients, from vegetables to fruit, from eggs to meat, from pasta to fish.  We can find it even appearing in desserts and ice creams, as a flavor enricher and enhancer.

Mozzarella performs at its best levels in cold dishes, as the chillier temperatures allow it to preserve its defining characteristics:  freshness and consistency.  Salads and appetizers served at room temperature allow Mozzarella to truly shine, and it finds a wonderful backdrop used in sandwiches, toasted breads, bruschette, and other bread-based preparations.  Chefs love using Mozzarella to enrich pasta and rice dishes, as well as meat or fish-based main entrées and desserts.

In the Pizza realm, if you’re planning on using Mozzarella to top your pizza, be sure to try this pro tip - it’s life-changing.  Refrigerate whole Mozzarella for 1 day prior to planned use.  After it has cooled for 1 day, slice and place on an absorbent paper tower-lined dish in order to allow the cheese to shed its liquids entirely.

The Caprese salad represents one of the most authentically classic pairings Mozzarella enjoys.  Slices of brilliant red tomatoes and milky, creamy white Mozzarella are laid out in alternating rows.  Their bright colors, particularly when drizzled with the green gold of extra-virgin olive oil, a pinch of dark-green oregano and spruced up with vibrant green basil, provides a triumvirate of classic Italian ingredients and colors.  Recalling the shades of the national Italian flag, this dish guarantees not only a delicious culinary experience, but a visually appealing chromatic contrast that is absolutely emblematic in Italy.

Mozzarella and vegetable pairings are greatly desirable.  Try matching Mozzarella with crunchy celery, radishes and green salads.  The lightness of these summertime vegetables increases the natural aromas of Mozzarella, which in turn adds weight to any vegetable-based dish without making anything overly heavy - a most important feature in summertime dishes.  Bell peppers, eggplant, and zucchini in particular, all have an uncanny way of making Mozzarella even more delicious, both in raw and cooked versions.

In the end though, Mozzarella becomes a sublime tasting experience following the most simple preparation you could imagine:  with bread.  Use the fresh cheese on breads made from just about any flour combination possible, and the result is constant:  unfailingly delicious and perfect simplicity go a long way in bringing Mozzarella’s perfection to your taste buds. 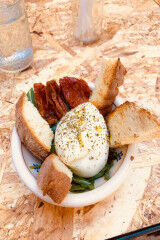 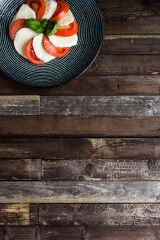 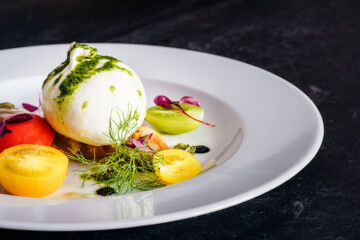