Giorgio Lungarotti Wineries - The Bridge between past, present and future

Giorgio Lungarotti, an Umbrian-born wine-visionary decided in the early 1950's to turn his family's agricultural operations into a specialized wine estate. 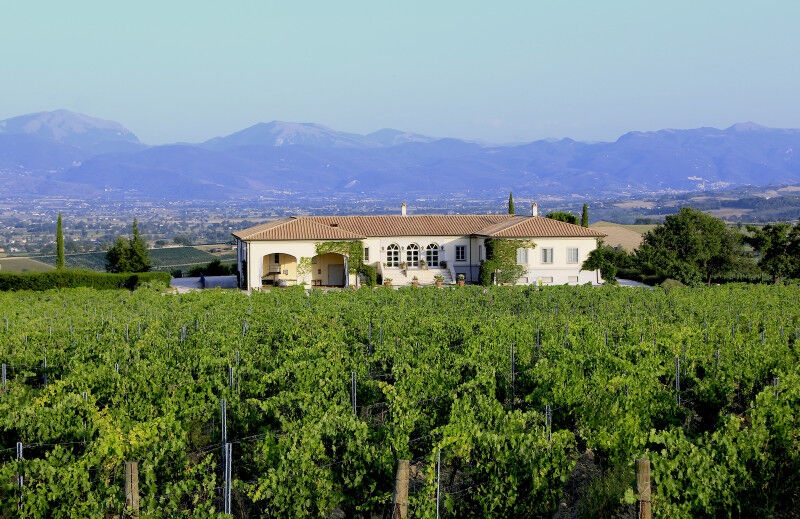 Cantine Giorgio Lungarotti is a reference point for the entire region of Umbria. Why the leading role? We can thank the winery’s top-tier production quality as well as the pioneering and explosive role its founder, Giorgio Lungarotti, has played in the development of Umbria as an important central Italian wine region.

There are just a handful of other Italian wineries that can boast such a similar range of not-to-be-missed experience. What are those experiences? The Lungarotti Foundation that covers the MUVIT Museum (focused on wines) and the MOO Museum (focused instead on olive oil and olive trees); the elegant 17th century farmhouse holiday home Poggio alle Vigne; and last but not least, the imposing Lungarotti wine estate, the ideal location for visits, tastings and a range of specialty-ingredient focused experiences highlighting Umbria’s vast culinary heritage.

These solutions are all wonderful examples of how Umbria has acquired an authentic cultural centrality in the world of Italian wine and olive oil.

Over the course of the past 40 years or so, the course of Italian wine has been transforming itself into a symbol of the local environment. Italian wines are more often becoming the result of a productive decision and a commercial strategy. Our local perception of wines has taken on more contextual imagery and form, thanks to the ever-increasing demands of the international marketplace which is sustained by uncompromising virtues and needs.

In the midst of such a difficult territory to navigate, there have been pioneers who have successfully carved out (even in the past decades) paths with courage and competence. These pioneers have managed to crack open a decidedly unfertile ground with their desire to maintain the nectar of Bacchus, an agricultural product first and foremost.

Giorgio Lungarotti provides us with a most admirable example of this pioneering wine spirit. In 1962, when Lungarotti began working in the field of viticulture, his goal from the very outset was to contribute significantly to the creation of top-quality Umbrian viticulture. Lungarotti’s dedication paid off with quick results, creating a fuller, more sustained dimension to this wine region, and placing the Torgiano wine estate at the very forefront of local enological story-telling.

What is a common link at the heart of this winery? The desire to continue creating and a constant desire to improve are perhaps at the very foundation line of many of the winery’s initiatives, and perhaps even the secret to its success in implementing change and improvement across the decades. 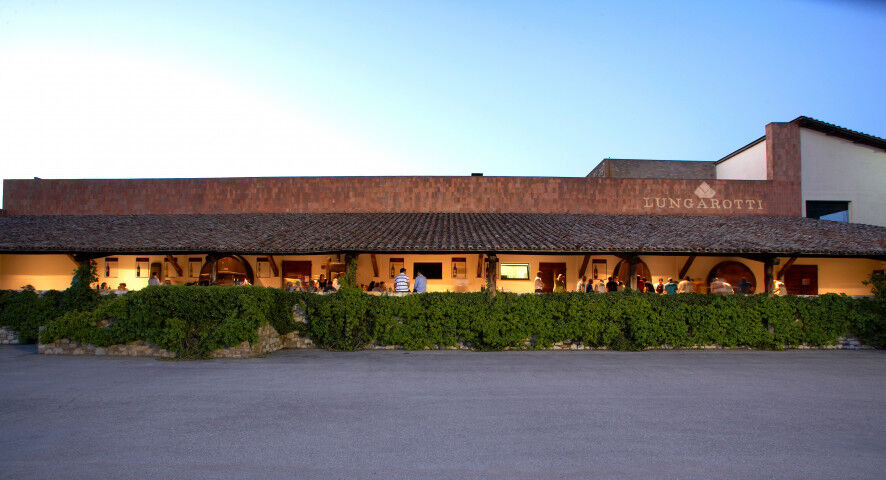 The Wine Museum was founded in 1974 by Giorgio and Maria Grazia Lungarotti, and was very shortly thereafter defined as the best of its field by The New York Times. The Museum was created in order to open and maintain a dialogue between the world of fine wines and decorative arts.

1987 saw the creation of the Lungarotti Foundation, created to support the tremendous cultural heritage Italian agriculture has granted today’s civilization.

The year 2000, sadly just one year following Giorgio Lungarotti’s death, was the year the Olive and Oil Museum was inaugurated. This museum was conceived as being the natural evolution from the Wine Museum, with a similar mission to maintain the working relationship between the world of Olive Oil and decorative arts.

From 1999 onwards, the Lungarotti domain has been under the guidance of “super sisters” Chiara and Teresa, who have guided the ship with great wisdom and mastery.

The sisters also create an ideal couple to lead, with definite traits of sensitivity, irony, care, determination and ability to see 10 steps ahead into the future. Both sisters are keenly aware that both wine and oil continuously represent some of the greatest symbols of civilization we have in today’s world.

The businesswomen have solidly made decisions in the workplace that tend to reclaim the practices and mores of their specific cultural environment. They have also quite literally poured their family’s heritage and passion into the production of their wines and oils, giving the products a familial conviviality that elevates the Lungarotti products to a new level of refinement.

We can think of no better way to honor the Lungarotti wines and oil than with the creation of their association tasked with the defense of the estate’s heritage, tradition, and production processes.

It’s a matter of family pride that Chiara and Teresa have managed to carve out their own spaces in an often difficult territory. They’ve not only enhanced the family’s wine and olive oil production, but they’ve managed to do so in a way that’s both constructive and effective, while at the same time, keeping the Lungarotti family name as a critical part of Italian and international wine-making scenes.

The Lungarotti family has always made a point of following the common threads between agriculture and tourism, recognizing from the outset that one sector can help set a spark of interest in the other sector, and vice versa. The family has made a point of strengthening the notion of Territory in order to express its strong local resources and distinctive production processes. The desire to shed light on the concept of typicality is present as well, as far as it relates to the notion of local identity, a theme important in the Umbrian wine-making family.

The Lungarotti family thus has shown its noble intentions repeatedly, and even though the notion might seem clichèd, the desire to work towards a Common Good has been at the base of their efforts for generations now. This is after all, the key for today’s generations and those of tomorrow.

The Lungarotti model of wine and food tourism has been the industry trendsetter now for some time, moving food and wine experiences beyond simple merchandise to be consumed. Each plate of food and each glass of wine now is laden with territorial significance, with a bite or sip of history in each experience, giving visitors a true sensorial knowledge of the territories they’ve experienced.

The Lungarotti family has remarkably been able to create a deep, complete cultural experience thanks to their belief that only by increasing the overall quality of local life can a truly rewarding wine and food experience be enjoyed by travellers. 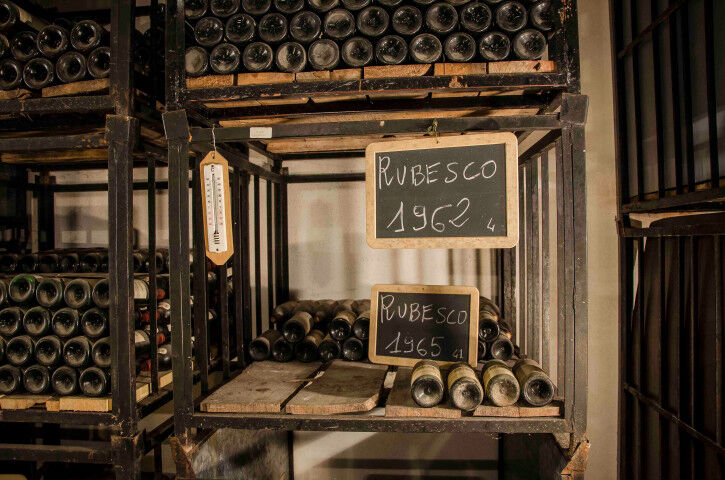 We already know that Giorgio Lungarotti will be remembered among many reasons as the winemaker who put Umbria on the international map of wine. Lungarotti proved that in Torgiano, gently nestled among the sweet hills of the Tiber River, a red wine could be produced in Umbria that was also suitable for aging.

The Rubesco Riserva Vigna Monticchio wine is the most prestigious wine created in the Lungarotti winery. Rubesco Riserva is produced with Sangiovese grapes, and is hands-down the most important Sangiovese-based red wine outside Tuscany.

The Rubesco Riserva is a wine that helped create the Umbriano wine history, but also helped usher along Italian red wine-making as well. The vineyard itself is located in Brufa, a small town near Torgiano, located in the Tiber valley south of Perugia.

The vineyard comprises 15 hectares of land with lake-soil origins. The soil here is mediumly-compact with a remarkable pedological variability. Soil types include sandy clay rich in calcareous elements and silt, and located on southeastern slopes reaching an altitude of almost 300 meters (1,640 feet).

The vineyards are cultivated with double spurred cordon, and are harvested in October. Musts ferment in stainless steel tanks, with maceration on the skins for 15-20 days. Following fermentation, the wines then age for one year in barriques, followed by bottle-aging for the next several years.

Thanks to its complexity, the Rubesco Riserva Vigna Monticchio is a wine suitable for up to 30-35 years of ageing.

This is a wine with tremendous olfactory finesse and sensations. The wine also is incredibly smooth on the palate, with complex, persistent finishes. The name Rubesco rather whimsically derives from the Latin verb rubescere, to blush. Therefore, the wine transcends a meaning related to emotion and humility.

The first vintage of Rubesco Riserva dates back to 1964, a whole other story. From thereon in, we can find many memorable vintages like the 1974 vintage, the first in which the vineyard of origin is documented.

We can also find the 1977, the first vintage where ageing took place in casks for approximately 18 months, and from that year for the next 20 years.

The 1982 vintage was instead the first to be partially aged in French oak barriques, an absolute novelty for the area.

Heading into the 1980s, we can find the most long-lived and perhaps spunkiest ‘80s vintage, the 1988. Today’s vintages have always been note-worthy, and remarkably affordable.

Why should you visit Lungarotti winery?

For the simple fact that by visiting the Lungarotti winery, you’ll be gaining precious insight into Umbrias as a wine-making region complete with its own territorial imprint and history. 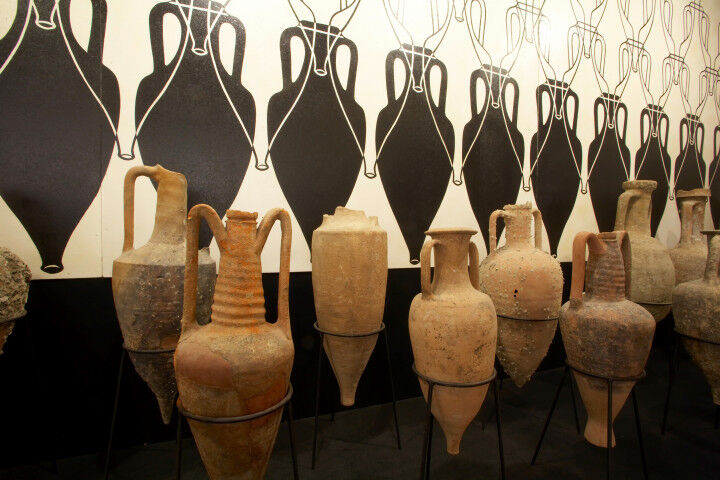