What is Lugana wine, Italy?

Explore the Lugana wine region. Lugana is one of Italy's oldest protected wine-growing areas, and home to Turbian 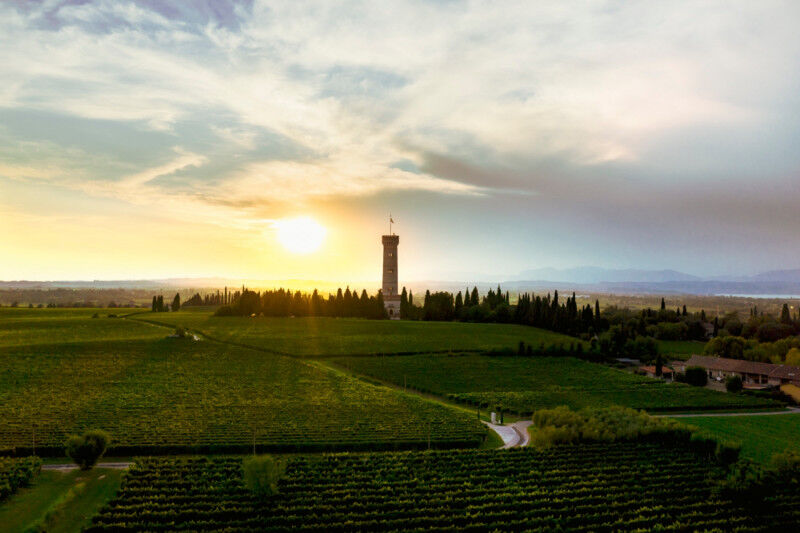 Lugana is a small, wonderful, precious portion of land adjacent to Lake Garda’s southern shores.  Beginning in Pescheria, in the Veneto side of the lake, the area continues up through Sirmione and Desenzano. The district continues inland, edging into the morainic hills between Pozzolenga and Lonato.  The Lombardia-Veneto region is positively brimming with vineyards, hotels, wineries, and B&Bs, all eager to welcome back spectacular wine, scenery, and food lovers. 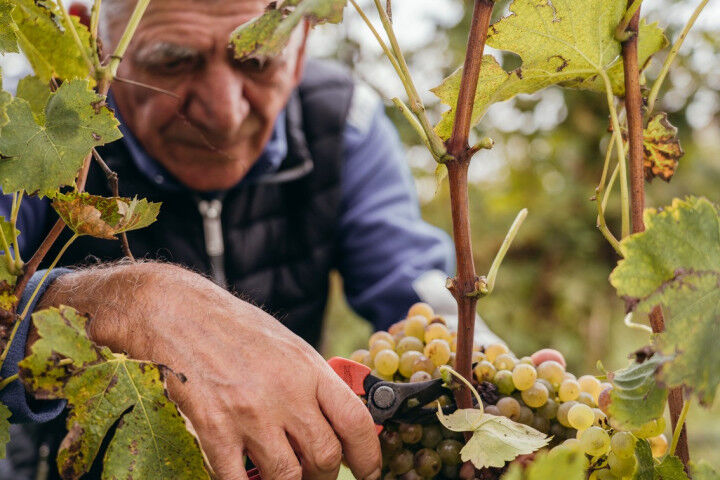 Is Lugana a good wine?

Lugana DOC wines are born and bred in this evocative setting, whose name is closely linked to the ancient Selva Lucana, a marshy forest once covering the entire area. Today, the

Selva is instead populated by local wild boar, and different types of regional deer. The area’s gentle ecosystem, and the presence of a surprisingly mild climate has continuously encouraged locals towards planting vineyards. When tasting a Lugana wine, you can immediately recognize the wine’s territorial origins, where the soil is made up from a variable combination of clay, calcareous soils and an abundance of mineral salts. All this, thanks to the area’s morainic history.

It’s certainly worth noting that Lugana has an ancient historical context, with a longtime resident in Gaius Valerius Catullus. Catullus extolled Lugana in his writings and songs, and already noted the local white wine’s prestigious reputation.

The Longobard and Ostrogoth kings who would later dominate the local lands were reputably admirers of the Lugana white wine, so mush so that King Teodato, residing locally in approximately 500 A.D., defined Lugana wines as royal wines in historical records. 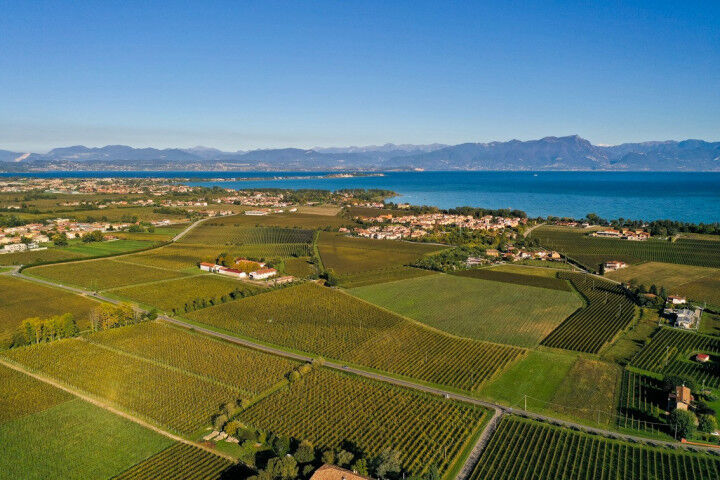 Speaking solely viticulturally, the Lugana territory can be divided into two individual macro-areas. The first area is larger and composed primarily of harder clays in the soils. This area is flat, and extends horizontally along the inner lands of Desenzano, Sirmione, and part of the districts of Pozzolengo and Pesciera. This is the true heart of the Lugana DOC denomination, and where the intense minerality that so often defines Lugana wines can be expressed with greater strength.

The second area is defined by a hillier landscape. The area begins from the oft-photographed Monumental Tower of San Martino della Battaglia, and extends in a double layout. One side heads towards Pozzolengo, and the other side heads instead towards Lonato. As we move away from the lake, the clay in the soil loses its tenacious character, and allows more space for morainic soils to settle. 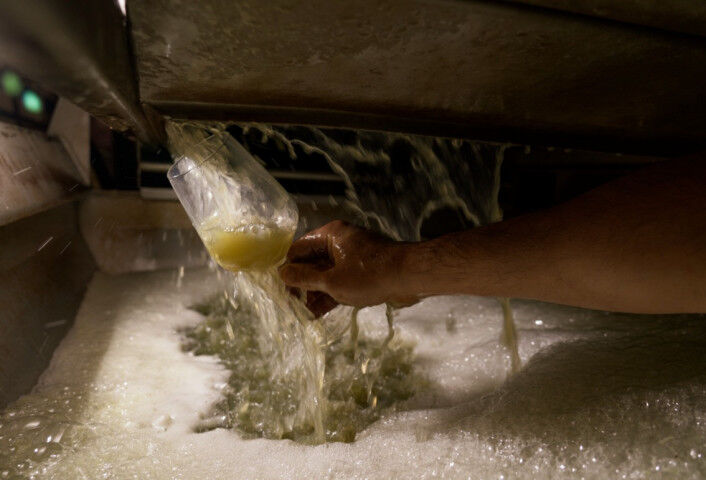 Contemporary Lugana wines are sought after for their illustrious harmony between aroma and flavor. Lugana wines also feature wonderful flavors, a bold directness and structural components that impose themselves with great success in the wines. This allows, among other benefits, the possibility of some Lugana wines to age gracefully.

It comes as no surprise, considering the remarkable quality of the Lugana wines, that the Lugana DOC was the first registered DOC in Lombardy, and one of the very first in Italy.

Lugana DOC wines must be obtained from the Turbiana grape variety. Other grapes may be used to produce this wine, with the exception of Muscat or Malvasia grapes. Additional varietals must be limited to a 10% presence in Lugana DOC wines.

The DOC regulatory boards call upon the Turbiana varietal as being the emblematic grape of Trebbiano di Lugana. Turbiana has become the go-to choice for generations of local vintners, and has become a fundamental element in the valorization of the lower Lake Garda area.

The Lugana area’s microclimate is directly influenced by the gentle Lake Garda breezes. The area has proven ideal for vineyard cultivation thanks to its placid nature and the low temperature fluctuations between day and night.

This land has become for all intents and purposes, a climatic cradle, or an area containing the ideal characteristics necessary for the Turbiana grape to express its natural peculiarities. This special grape therefore finds the perfect environment locally to express its unexpected resources. The grape absorbs the gifts of its surrounding nature, and is infused with remarkable strength and power. 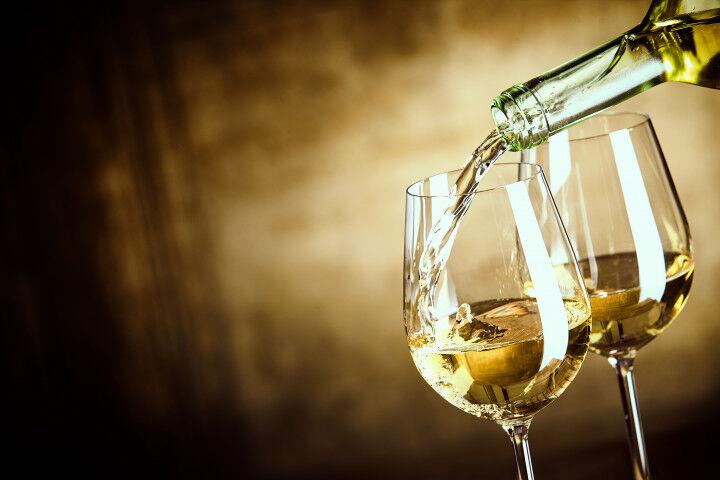 What type of wine is Lugana? 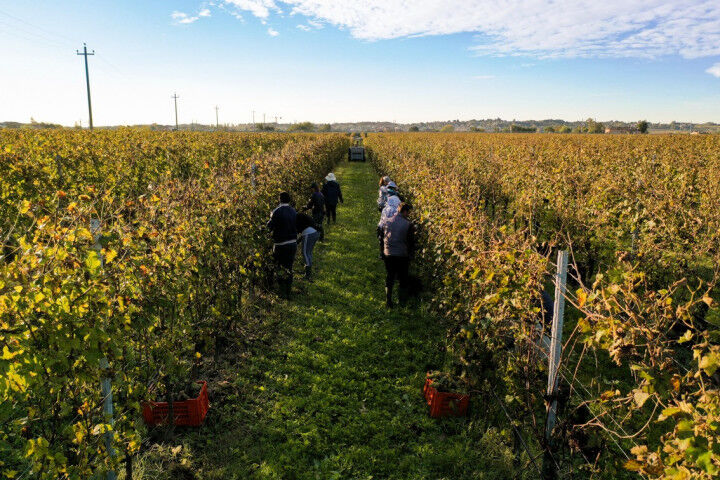 Peschiera del Garda can be defined as the Venetian capital of Lugana, and gives us an immense wealth of ancient history that can’t be missed. The area began life as a rural Roman village pinpointed on Via Gallica, notable for its abundance of local fish.

The area was given a new lease on life in the 6th century, when it was developed into a fortified town, home to the castle and fortress of the Scaligeri family, recollected by Dante as the “beautiful and strong arnese.” This heavily armed fortress was constructed to protect Venice and its interests in the 16th century.

The 19th century instead saw it become a stronghold of the Austrian Quadrilateral defensive system in the area.

The area gives us many fine wineries to visit, including the unmissable Zenato winery, as well as the flourishing Le Morette and Ottella wine estates.

Desenzano del Garda, also of Roman origins, instead can call itself the Lombardy capital of Lugana.

With its ancient history of trade and food-related activities, this area closes Lake Garda to the west, and lies on fertile morainic hills. Today, ancient remains mingle with Venetian ambiance in the city’s old Port. The impregnable views of lake waters reflecting the blue skies just as a mirror would, provide visitors with many a good reason to check out the area.

Visits to the area’s Ca' Majol and Selva Capuzza wineries are must-include stops in on any wine and food lovers’ list.

We conclude our exploration of the Lugana area with the splendid Sirmione, offering a legion of luminous panoramas. Catullus was especially moved by Sirmione, describing it his in moving verses as being “the pupil of all peninsulas.”

Observed from a distance by a massive Scaliger fortress, Sirmione juts out into the blue waters of Lake Garda, with the soft green shades of olive tree shadows crowning the remains of a grandiose local Roman villa. Sirmione is also a significant location climatically speaking, thanks to the presence of hyper-thermal waters that flow out from the lake’s depths, reaching almost 20 meters.

Two wineries that offer a superb Lugana wine tasting and open their doors to wine enthusiasts are Ca' Lojera and Ca' dei Frati. 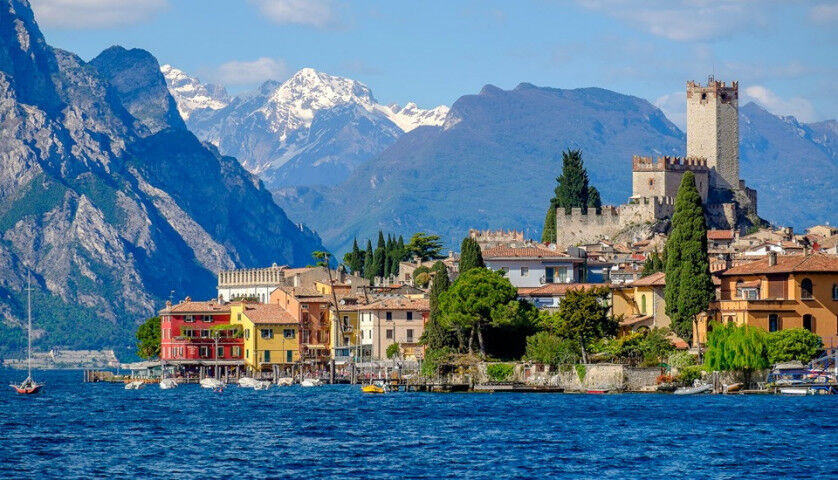 Where to eat in Lugana? 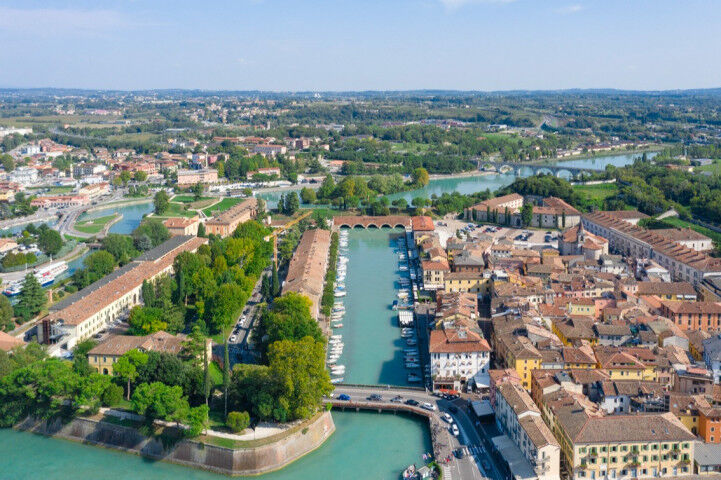 Raw fish dishes stand out in this cuisine based on research and flavor enhancements. The spacious setting and attentive service augment the enjoyment of these innovative dishes. 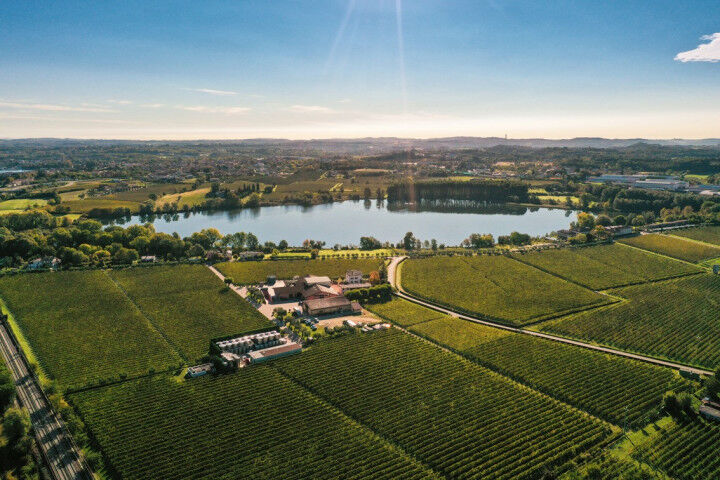 Local dishes and pizza rule the restaurant’s roost, where the Noris family has been running the show since 2009 with tremendous passion and love of local flavors. 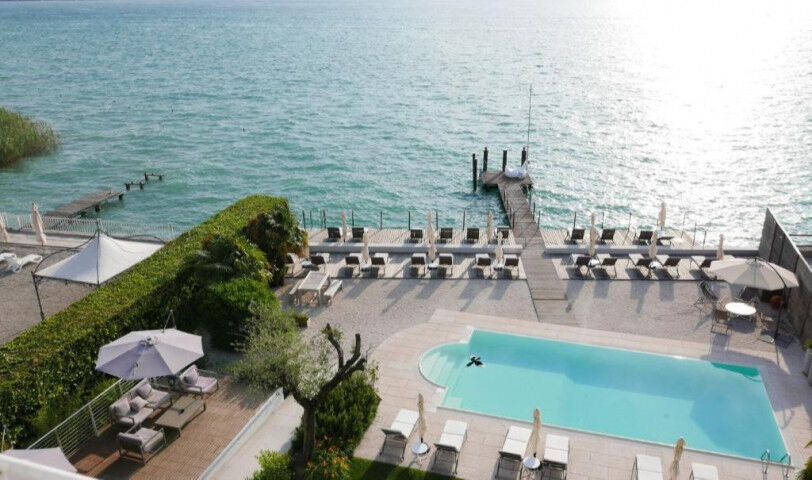 Where to Sleep in Lugana?

A nice boutique hotel expressing an essential, minimalist approach. The hotel is completed by a beach and lakeside swimming pool where you can also enjoy a terrific light lunch service.