Learn about wines from Abruzzo. Does Montepulciano, Trebbiano, Pecorino and Cerasuolo ring a bell for you? Abruzzo wines and grapes to know about. 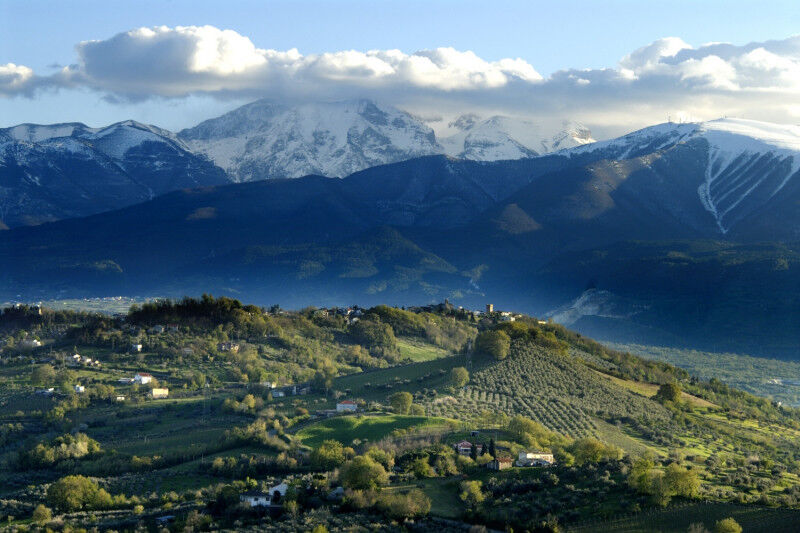 Article /  What is Trebbiano Wine? All you need to know about the most important Italian white wine

A fairy-tail-like territory charmingly criss-crossed by vineyards that follow each other up from the coast, and manage to penetrate seemingly impervious mountains and nature reserves.  The land is marked by appealing wild dunes and fresh pine woods, offering a taste of local story-telling.

The area benefits from its status as an unique land enclosed between the Adriatic Sea and the rock formations of Gran Sasso, Majella and Monti della Laga.  These elements make the region naturally suited for the cultivation of vineyards.  The gentle sea-bound slopes reflect a geological uniformity and sweetness, whereas the inland and foothill areas are harsh and more volatile.  This juxtaposition of climates almost demands respect and admiration from visitors.

As we explore more of the region, the area’s most genuine virtue is demonstrated:  a region that manages to develop only alongside mountains and hills without ever giving way to plains.

ABRUZZO VITICULTURE AT A GLANCE

Two grape varieties, Montepulciano and Trebbiano, almost wholly compose the ampelographic base of Abruzzo viticulture:  90% of the wines produced, in fact, come from these two varieties.  In the past, this viticultural patrimony was very complex and varied.  Historically, up until the end of the 18th century, Abruzzo was a land of Lacrima, Zibibbo, and Moscatello grapes.  Then the scourge of phylloxera struck, severely affecting local viticulture, resulting in the hegemonic duo vine varietals seen today.

Chieti and its province represent the main source from the quantitative perspective.  Amidst its languid hills, the vigorous inclinations of youthful viticultural realities (compared to the previous generations’ experiences), is not lacking.  Sometimes, these impulses ultimately turn into beautiful family adventures with flourishing futures.

THE FOUR "CARDINAL POINTS" OF ABRUZZO

The Montepulciano varietal historically comes from Valle Peligna, located in the province of L’Aquila.  This grape must not be confused with the wine produced in Montepulciano, Tuscany, which is crafted with the Sangiovese grape.

The Montepulciano vine produces a wine with a terrifically complex nectar, expressing many souls.  Montepulciano boasts many stylistic and interpretative profiles, and imbibes wine drinkers with a powerful, structured wine, notable for its elegance and numerous olfactory nuances, some of which are earthy in nature.  The aromas of the Montepulciano wine typically are more distinctive and expressive when aged.

You can also pick up on clear references to cherry and Morello cherry, and thick, strong tannins.  This wine is delightfully soothing, with a finish strongly supported by a considerable extractive and alcoholic strength.  The Montepulciano wine is a clear child of diverse climatic and pedological situations, born and raised in an array of altitudes and farming systems diversified to maximize the vine’s growing potential.  Montepulciano can claim today, with much more authority and energy, a formidable winemaker’s red wine.  The Montepulciano wine has lofty ambitions, desiring intrinsically to claim its place among the world's wine excellences.

Trebbiano is a grape capable of producing easy-drinking wines that are not particularly exciting.  This non-distinguishing feature increases drastically when yields of grape production are high.  Even though this reputation is actually not entirely untrue, we can’t overlook that there are a few essential wine producers who are able to coax some of the most nuanced and thrilling white wines within the entire Italian white wine scene.

We’d be remiss if we overlooked the “re-discovery” of indigenous grape varieties that were once abandoned, such as the Pecorino varietal.  This grape and its resulting wine are today gaining a significant following among a wide range of consumers.  Intense fruity aromas, sometimes with notes of anise and field grasses, this is a wine with a full structure supported by good acidity, sapidity, a good alcohol content, and a long persistent taste.

Finally we can admire the Cerasuolo.  This wine consistently amazes and wins over new admirers with is inherent freshness, structure and complexity.  Cerasuolo is exclusively obtained from the Montepulciano grape, the Cerasuolo "pink" version emits truly brilliant results.  This might also be the result of a conscious, realistic, wise reduction in the pursuit of the concentrated super-red grape version.

We can bear witness to a new age of Abruzzo wine development.  Wine markets are currently giving birth to the region’s evolutionary potential, and its ability to express a considerable versatility of soils and surfaces.  The Abruzzo-based wine makers are also most capable at marketing their wines in new, convincing ways, thanks also to the dedication and passion in recent years of the Consorzio Tutela Vini d'Abruzzo.

Winemakers in Abruzzo today are charged with the tricky task of both managing and enlarging productive mountainside vineyards so that the wines might express the finest merits of their terroir.

Winemakers must also be capable of carrying through accurate analysis of even the most suitable micro-zones, allowing for new vines to be planted and additional investment to be made in the land.  The success of the winemaker’s efforts ultimately lead to further investment in the area, and additional research into cultivation practices.  The research winemakers will produce will ultimately serve to help other local producers assist the “Magnificent Four” thrive and continue in their fascinating evolutionary path. 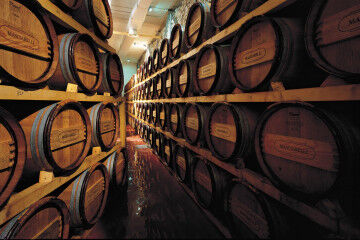 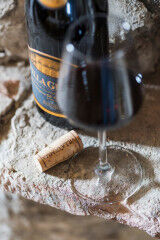 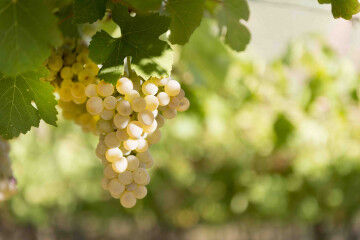