Explore South Tyrol - Italy: what to see, where to stay and what to eat

South Tyrol is a region in the northern Italian Alps. South Tyrol is particularly attractive for all types of travelers due to its natural beauty, rich history and interesting cultural heritage

When the Romans invaded the South Tyrol region in 15 B.C, they found fortified villages on the plateaus, transit routes in the valleys (in particular towards the Brenner Pass), settlements of the Rhaetian civilization (5th-1st century B.C.), which also flourished during the epoch of the Etruscans.

In 476, following the collapse of the Western Roman Empire, the area passed on to the rule of the Roman-Germanic kingdoms, the Lombards and the Franks. The territory then underwent a long process of Germanization by the Bavarians.

The Counts of Tyrol ruled for about 5 and a half centuries, fostering intense commercial development that was centered on Bolzano, an increase in local infrastructure, and an early vocation for tourism under the banner of the climatic and thermal warmth of Merano. The collective drama of the First World War separated South Tyrol from the Austrian Tyrol handing domain to Italy.

What are The Advantages of a Region with a Special Statute?

The turning point came after World War II, in 1972, when a new autonomous statue was introduced: a model of self-management of the territory and resources that included everyone under the umbrella of profitable development.

South Tyrol is the Italian region where Northern sobriety meets the sunny Italian styles, blending varied traditions, each with its own individual character.

Alto Adige enjoys a dynamic coexistence and a mutual coexistence, both in the cultural sense and the overall lifestyle sense.

What do Alto Adige residents speak?

In this unique region where the German language finds a home, it’s not unusual to find this language taking a dominant role over Italian and Ladin-based languages.

It’s through its languages indeed that the three individual cultures are revealed:  this ethnic blend that can be a role model for the rest of the country, and that is still in full vigor in contemporary society.  These cultures coexist respectfully together, with each recognizing the others’ autonomy.  All three cultures are so enmeshed that they form today’s  Autonomous Province of a Special Statute Region.

The Alto Adige region is home to approximately 500,000 inhabitants.  The region is composed of 116 municipalities and 8 separate provinces that create a foundation for the region’s socio-political and administrative management that distinguish themselves for the competency in all areas of daily life, from environmental protection to infrastructure management and development.

What area does South Tyrol cover?

Like the ribs of a leat, the province of Bolzano divides into a multitude of valleys branching out from the central axis of the Adige, Isarco and Rienza Rivers. 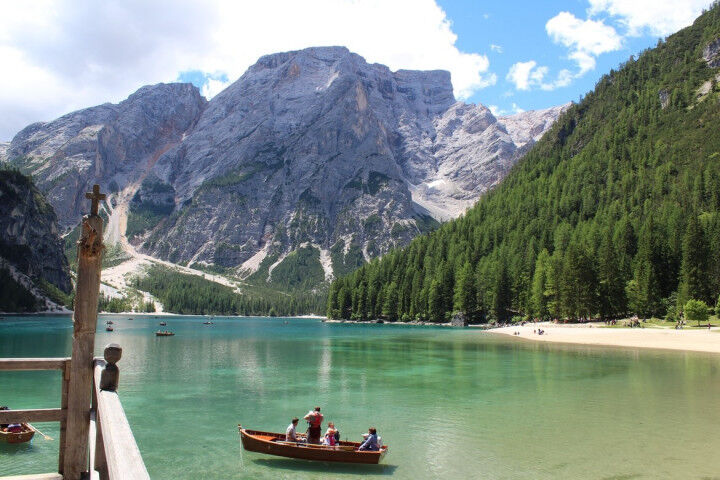 What’s there to see in Alto Adige?

The Alto Adige region is dominated by the presence of the Dolomite mountains, with their unique forms shaping the region:  walls, towers, crests, spires, and bell towers lend an almost architectural construction to the region.

It’s a stretch for the mind to imagine, but these mountains are actually striking petrified coral reefs jutting up from the floors of an ancient tropical sea, and reaching up to 3000 meters in height today.

Heading into more ground-level terrain, we find the area’s valleys lined with orchards specifically in the Adige Valley.  These fertile territories also include the Bassa Atesina, near the Lana area in the Venosta Valley, in the Isarco Valley and in Bressanone.

The Alto Adige region is also home to prolific vineyards, that are today tended and curated like gardens that climb the slopes of the Oltradige hills, from Salorno to the Bolzano basin, from Merano on the sunny side of the Vinschgau, and to the Abbey of Novacella on the banks of the Isarco River.

These lands are dotted with meadows that are indeed well-cultivated pastures studded with farms and Alpine grazing grounds for high-altitude pasturing lands.

Incredibly, there are acres of strawberry fields in Val Martello.  These fields come in at an altitude of over 1000 meters above sea level, and provide an amazing fruit that must be tasted to be believed.

Agricultural development can also be found in neighboring Valle Aurina, with its extensive cultivation of aromatic herbs, red cabbage, and potatoes.  Lovely to also see are the nearby dandelion fields in Alta Val di Non. 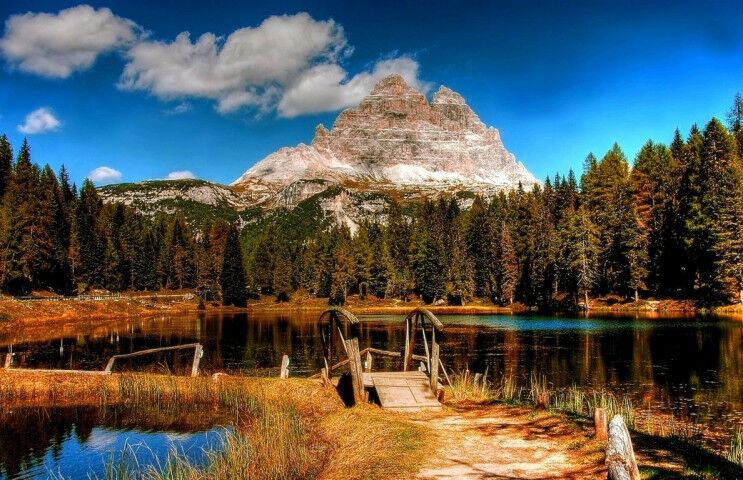 What are the culinary delights of Sud Tyrol?

The culinary imprint of the Sud Tyrolean region is without a doubt Germanic in its origins.  The focal points of food history in the region focus on agriculture, and the prodigious offerings the lands actualize.

The innate authenticity of the region is communicated rather uniformly - the region’s products offer an overall consistent level of quality linking the different regions under the umbrella of its geographic logo.

Milk, the South Tyrol’s "white gold," is of an excellent quality thanks to the purity of its fodder, and the practices of free pasturing for its livestock.

The diversity of local cattle breeds as well as the ancient traditions of cheese-making all assist in creating a range of dairy products particularly rich in flavor and quality.

The meadows where the animals pasture also offers a large quantity of multi-flower honey and assorted medicinal and aromatic plants.

Local bread varieties tend to be baked with dark rye flours, and recall ancient history with their scents of fennel, cumin, and coriander.  Traditional bread varieties include Schüttelbrot from the Isarco Valley, Vinschgerle and Ur-Paarl from the Venosta Valley, and Pustertaler Breatl.

A sweetened version, featuring slices of dried pear baked into the dough, is Palabirnbrot.  If you prefer a sweeter version, packed with dried fruit, don’t miss a taste of the local Zelten bread.

The valleys of Martello Ultimo, Isarco and Pusteria are famous for their small fruits (like strawberries and raspberries), a crop also produced successfully in the Renon plateau.

The Etsch and Vinschgau valleys produce apples of many varieties and of commendable quality.  The production of excellent natural fruit juices is another beloved local product.

Speck, for the Charcuterie Lovers

Finally, we reach the cured meat Speck. This local precious delicacy is a single piece of pork left in a long, tall, narrow shape.

Speck is without a doubt a prized local product that symbolizes the flavor of Alto Adige.  Specific regulations exist to ensure proper production of this cured meat, and the result is a pork product brimming with local aromas and flavor. 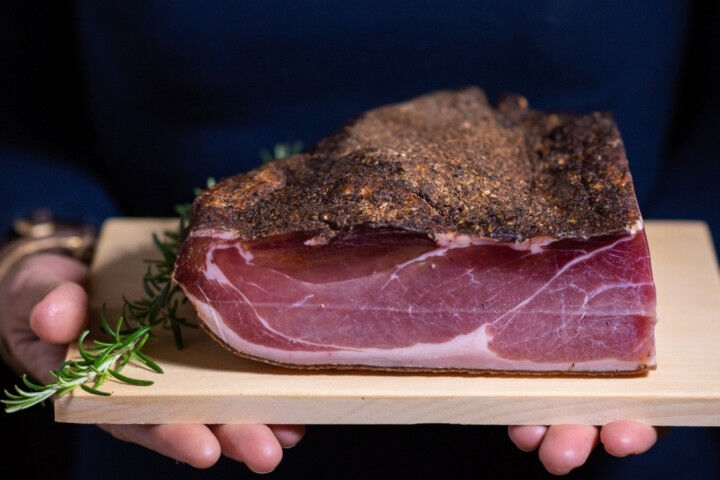 What are Alto Adige’s Finest Wines?

The wondrous spectacle of the vineyards fortuitously also translates into a multitude of fine wines, the result of a fortunate blend of soil, exposures, and local microclimates all featured in landscapes ranging from 200-1000 meters above sea level.

What Keeps Bringing People Back to South Tyrol?

The Alto Adige region is filled with reasons to explore a first time, and then come back for seconds.  If you love the culinary element, the region’s wealth of flavors and aromas will simply win you over.

If you prefer a sportive or get-back-to nature angle, well, the unforgettable mountains with their breath-taking vistas will provide nourishment for your soul and your eyes.  Skiing, trekking, and just about any outdoor excursion finds a home here.

Whatever your skill level, and if you prefer a relaxing trail or a more demanding itinerary, there’s truly something for all tastes.  And as you explore the South Tyrolean region’s great outdoors, you’ll be accompanied along the way with glorious mountain huts, inns, restaurants, and hotels.

Not too many other regions can offer so very much to visitors, and even fewer can boast of the area’s efficient, beautiful and bountiful selection of guest structures and facilities. 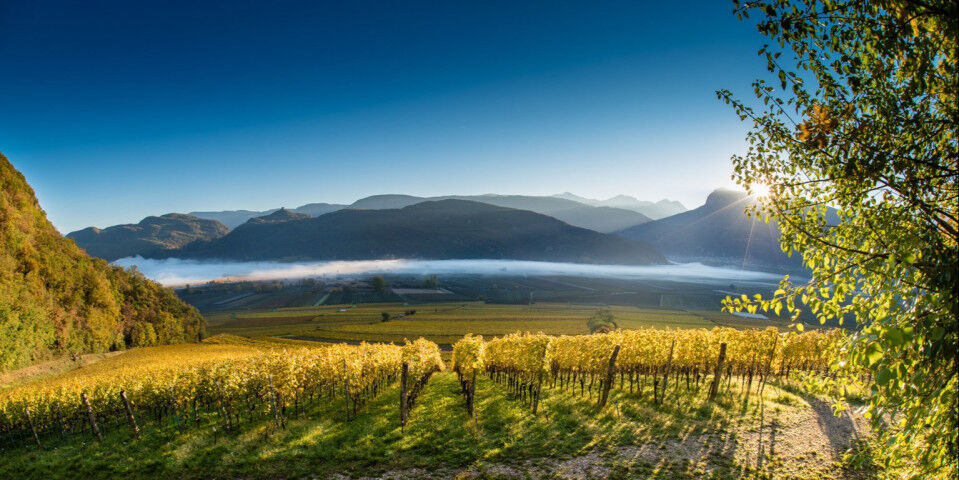