What are the Most Typical Tuscan Dishes? Recipes of the Famous Florentine Cuisine 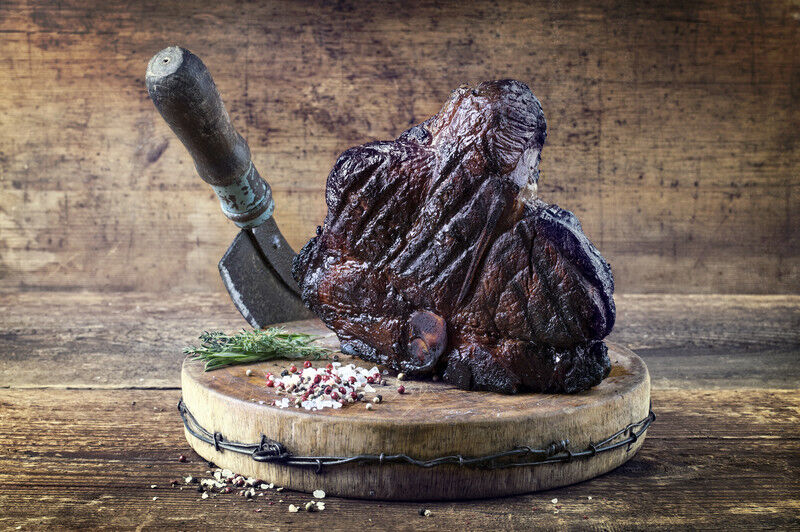 What are the Most Typical Tuscan Dishes? Recipes of the Famous Florentine Cuisine

What are the best dishes of Tuscan cuisine?

In Tuscany, even the rural landscape can be considered a work of art, built from the work of farmers over a thousand years: agriculture, more than elsewhere, has in fact fostered a strong bond between man and the land. 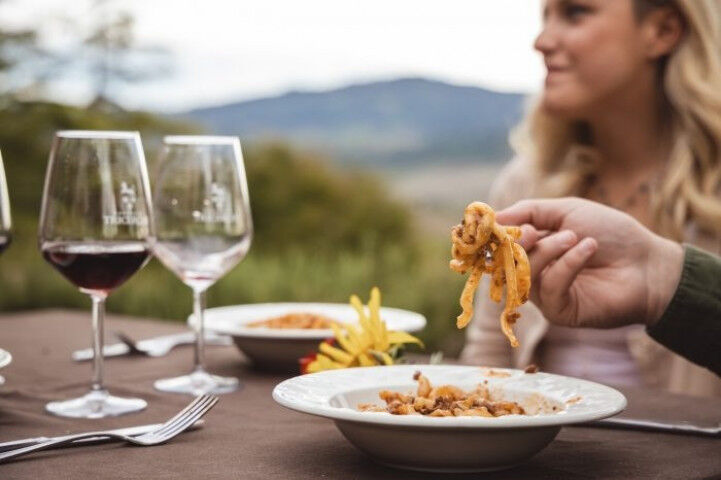 What are the typical products of Tuscany?

There are two symbolic foods, bread (a loaf without salt) and extra virgin olive oil, which together with vegetables, pulses and cereals make up a rich repertoire of soups.

What are the typical first courses in Tuscany?

Among the first courses, pappardelle, pici  and potato tortelli stand out.

What kind of meat is eaten in Tuscany?

The catalogue of meats tends to polarise on the one hand on the extensive use of offal (tripe, spleen, liver, chicken livers, feathered game offal), and on the other on the use of prized cuts such as loin of Chianino beef or other beef breeds in the famous steaks, pork loin in the roast arista, and poultry in sumptuous fried dishe

What are the Most Typical Tuscan Dishes? 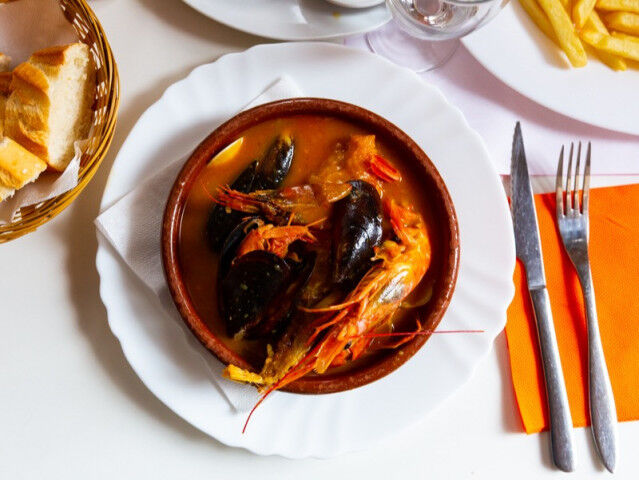 Famous fish soup, the historical culinary epic of Livorno cuisine. It is said that to make a good cacciucco you need thirteen different types of fish, but (just in case you don't manage to reach that number) you must include some soup fish (e.g. tub gurnard, skate, scorpionfish and rockfish) and you should also find some cuts of fish ( e.g dogfish) and molluscs (e.g cuttlefish and octopus). 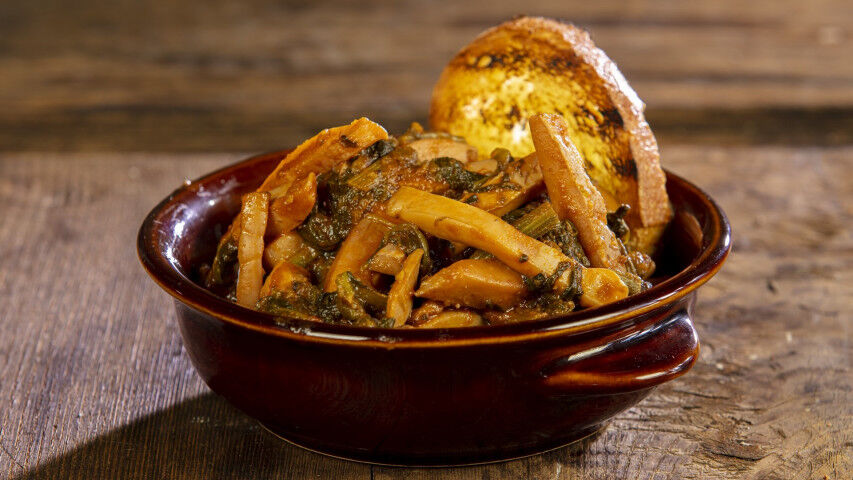 An appetising fish main course, enriched with spinach, Swiss chard and tomato. The etymology of the word inzimino is not very clear: there are various interpretations ranging from samin to samana.

In Tuscany, it means a particularly tasty fish dish. This is how fish preserved in inland areas, where there was no daily availability of fresh fish, was cooked.

► Read the recipe for Seppe In Zimino 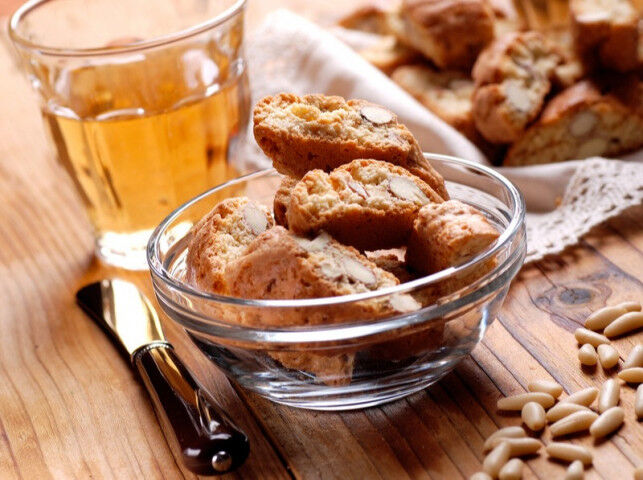 Delicious almond biscuits, very often used at the end of a meal accompanied by Vin Santo.

Their main characteristic is that they retain their crunchiness without becoming crumbly for a long time.

► Read the recipe for Cantucci 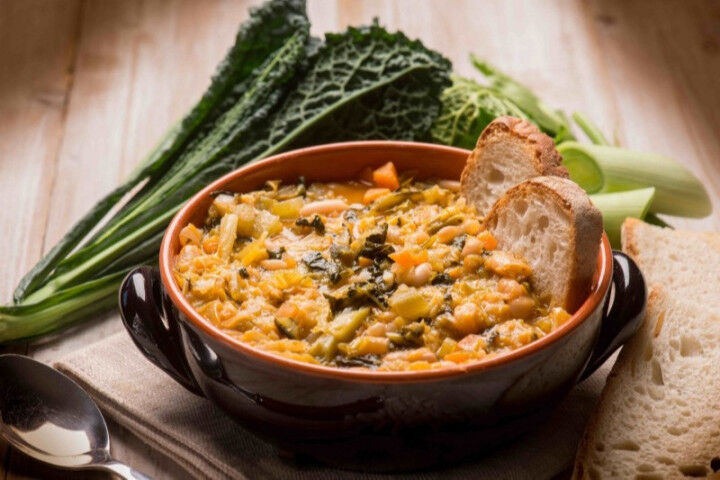 This is the Tuscan soup par excellence. It is a bread soup where the magic happens later, as the next day it becomes 'ribollita' or reboiled, i.e. everything is put back on the stove and left to 'boil' while stirring often with a wooden spoon: the result is, in fact, a soup with a completely different flavour from the previous one.

► Read the recipe for Ribollita 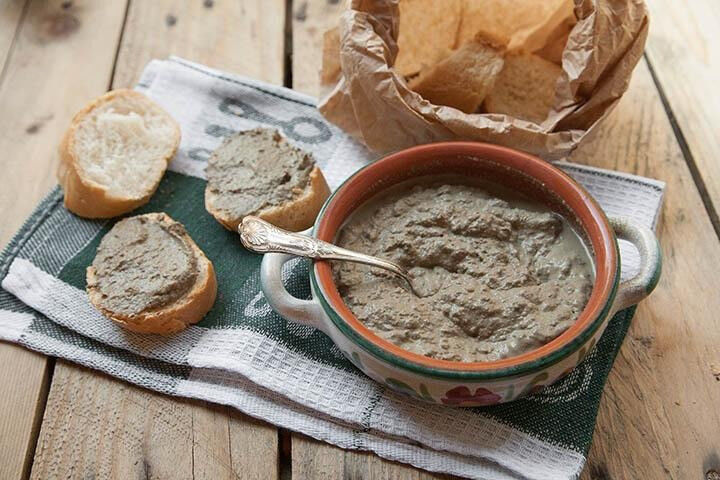 A classic Tuscan aperitif, a chicken liver (and heart ) pâté, to spread on bread crostini.

A speciality of peasant origin, created to recoup the offal and transform it into a delicious spreadable mixture. 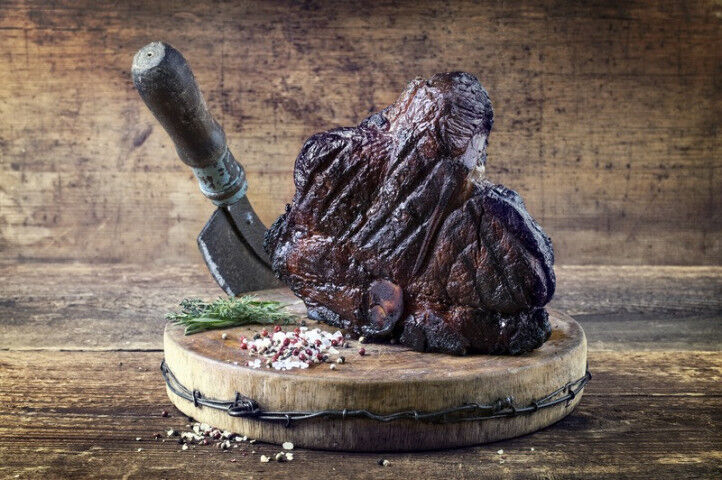 There is little to be said about the name, as it is clear that it is a vulgarisation of the English beef-steak, indicating a slice of beef. If anything, it would be a good idea to remember that the proper name is bistecca and not fiorentina (as in Florence the word fiorentina indicates either an inhabitant of the city or its football team).

To be worthy of its name, the steak must be large: both in thickness (at least 3 cm) and in surface area. Hence the need for it to be taken from a large animal, therefore not a very young one and of a breed specialised for meat.

► Read The Definitive Guide to Cuts of Meat: different cuts of Beef 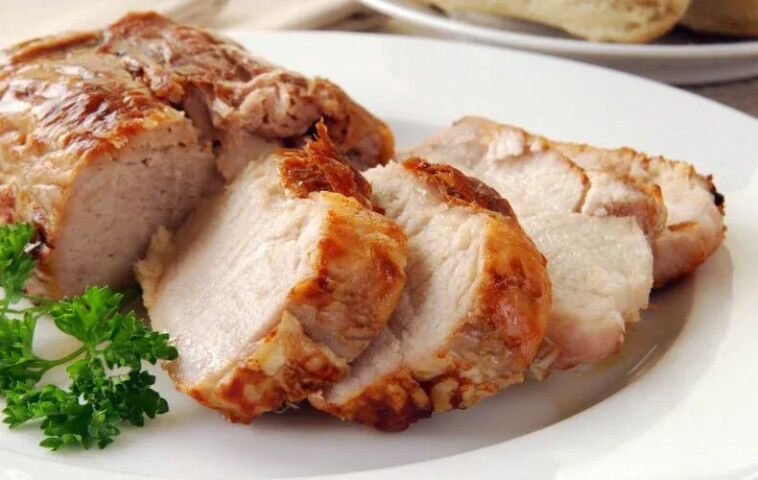 Legend attributes the term 'arista' to a Byzantine patriarch who, in the 15th century in Florence in an attempt to reunite the Churches of East and West, tasted this pork loin and is said to have exclaimed 'Àristos!' which in Greek means 'the best' and therefore excellent, exquisite.

Others, however, lean towards a derivation from the Latin arìsta, meaning something that, in a broad sense, stands on high, such as the loin of the pig. In any case, this dish has accompanied Tuscan history for many centuries. 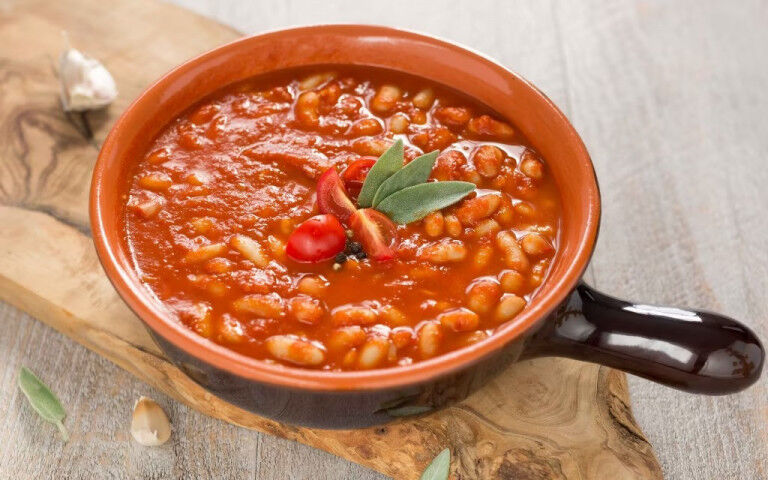 It is easy to notice that there is no trace of a bird in the recipe. Where the name comes from is not known: some relate it to sage, a herb used to flavour game.

This dish expresses the Tuscan passion for beans, particularly the cannellino variety, which is elongated and slightly prismatic. 'sgranati' or shucked i.e. picked before they dry completely and shelled from the pod, they have a colour somewhere between white and green, a slightly pungent taste and an unmistakable texture. 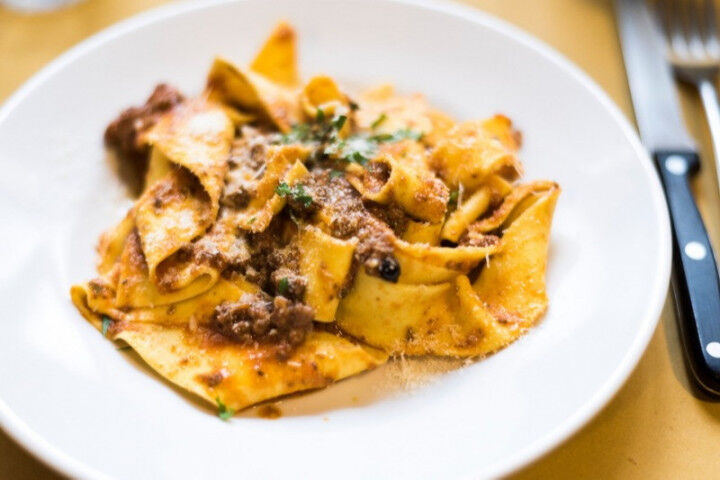 One of the most common uses of wild boar is as a sauce for pappardelle, an egg pasta format that is very similar to tagliatelle but much wider.

► Read the recipe for Pappardelle with wild boar sauce 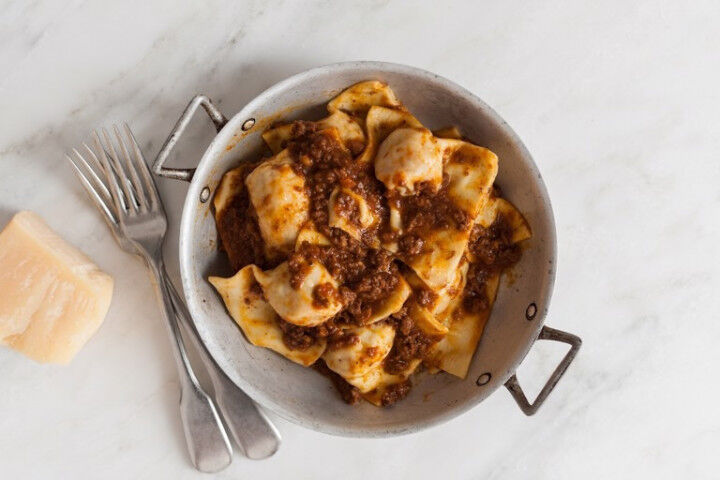 Potato tortelli are an exclusive heritage of the Mugello area, where every year the towns continue to compete in festivals in search of the best version.

There are various preparations, but in general there are two schools of thought: one believes the filling should be flavoured with a sauté of garlic, parsley, oil and tomato paste while the other opts for a meat sauce ragù.

► Read the recipe for Potato Tortelli 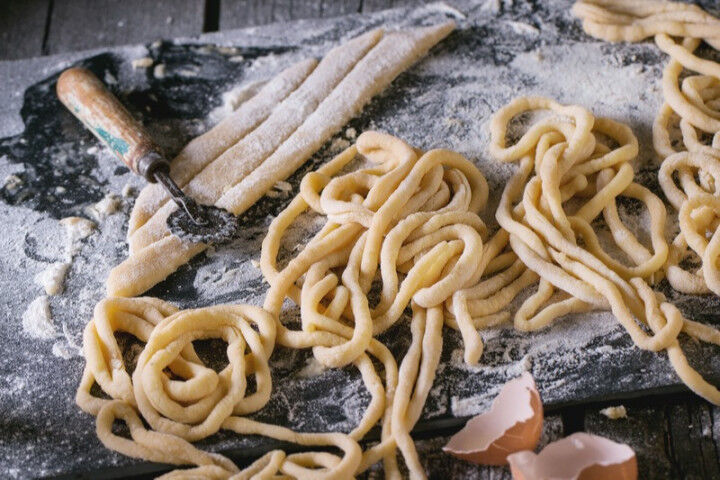 That the most typical pasta of the southern Sienese is pici is well known by now, and it is equally well known that, in the Chiusi area and generally in the lower Val di Chiana, aglione (a variety of garlic) and nana (duck) sauce are the most important condiment.

Pici is a large spaghetti-like pasta made from a mixture of water, flour and salt (an egg may be added when the quantities are large - above 10 portions) that must be worked with great energy to make it consistent and elastic.

► Read the recipe for Pici 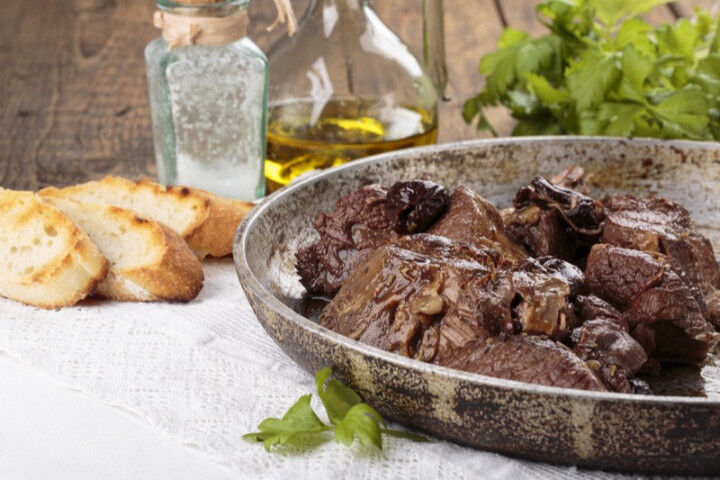 Of Medieval origin the word can be ascribed to the category of poor cuisine, albeit meat-based. Spicing and long cooking are its main characteristics which lend themselves well to the enhancement of less noble, tougher meats.

In an earthenware pot, beef muscle, garlic, salt, pepper and wine do their duty cooking for about four hours to make this excellent stew, which, alas is increasingly difficult to find in its original form.

► Read the recipe for Peposo 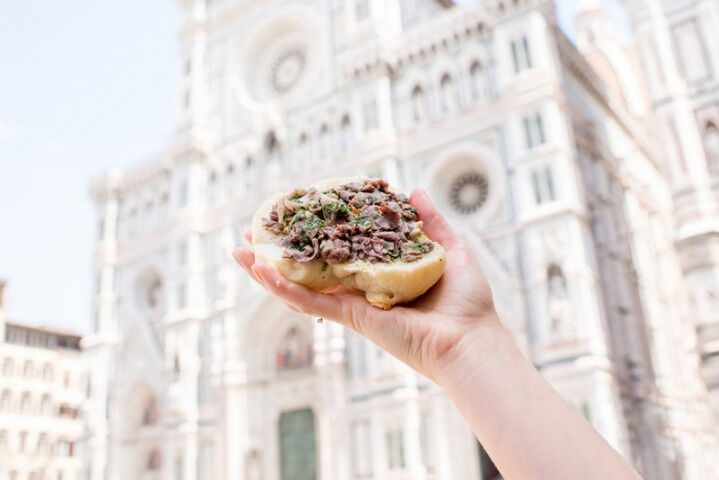 Lampredotto, made from the glandular fourth stomach of the bovine, is the authentic example of Florentine fast-food. Even today, Florence is teeming with street vendors selling delicious lampredotto sandwiches, a rustic but very welcome breakfast that everyone enjoys.

A tasty snack that in restaurants, however, is elaborated in different ways: inzimino, with chard, with mushrooms, with onion ... 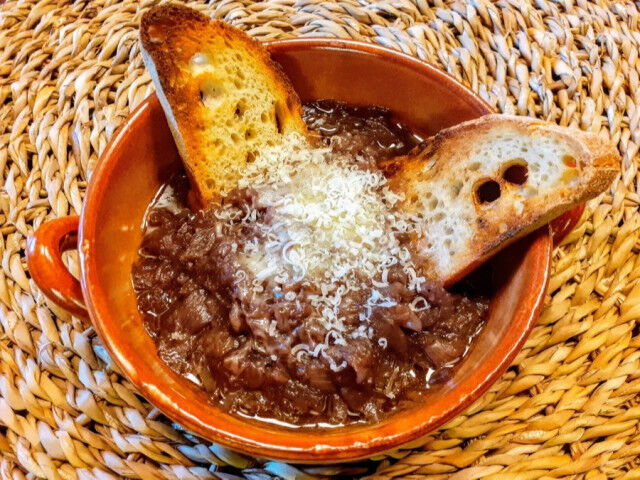 Named after a small boat in the shape of a shell that in times past worked as a ferry from one bank of the Arno River to the other (the name was later extended to the concept of a soup tureen and consequently to its contents).

This is an inviting onion soup, the mother of the French soupe des oignons, which in the past used almonds flavoured with sugar and cinnamon instead of legumes (peas or broad beans). 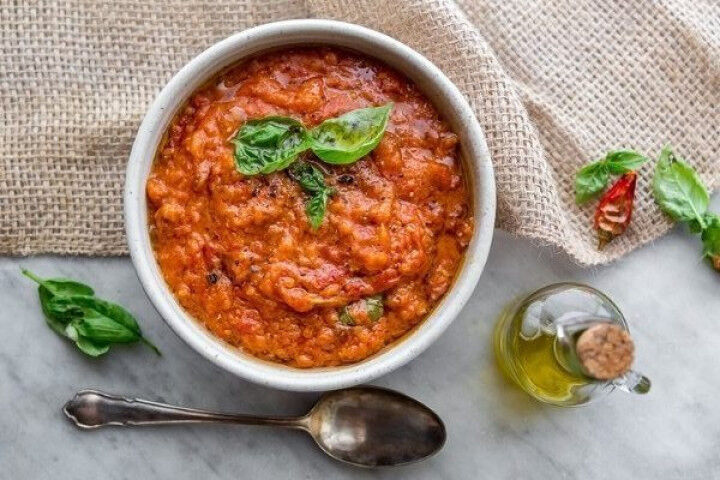 A dish of the heart in many parts of Tuscany, it is simply bread cooked with extra virgin olive oil, garlic and scented with basil, with tomato as the fundamental base.

You can make it more or less tasty, but you can't make it without garlic; while the bread must be Tuscan, a little stale (neither fresh nor dry) and white.