Wine in Oltrepò Pavese: A Wine Region in Northern Italy to discover

The Oltrepò Pavese is a wine region of Northern Italy. Historically "Old Piedmont", it is one of the three territorial areas that make up the province of Pavia, together with Pavese. 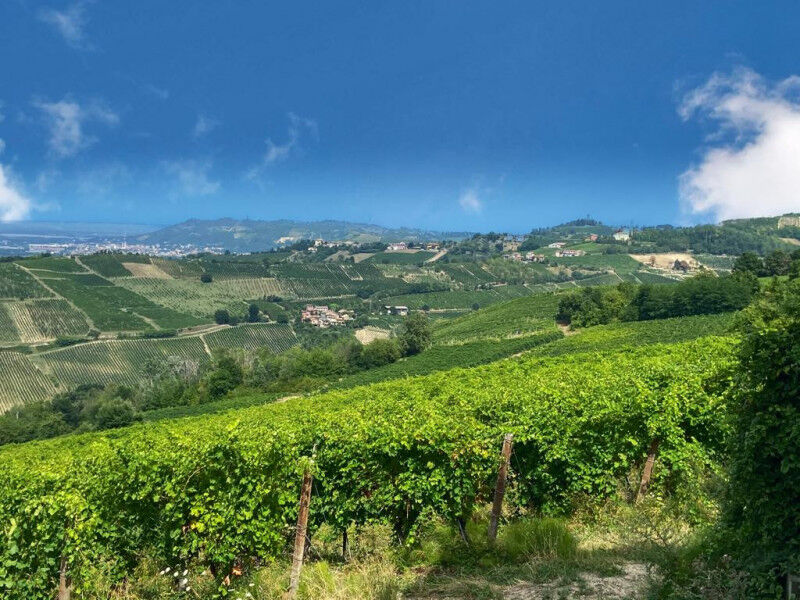 Getting to know Oltrepò Pavese wine

In this article we’ll talk about

Where is Oltrepò Pavese in Italy?

Oltrepò Pavese is in the province of Pavia, on the right side of the Po River, between the provinces of Alessandria, Genoa and Piacenza. The main towns are Stradella, Broni, Casteggio, Voghera and Varzi. A triangle of land, nestled between Piedmont, Emilia and Liguria, made up of almost 100,000 hectares, 16,000 of which are planted in vineyards. A strip of land of Lombardy, under the Po River, which rises southward from the river in the middle of the northern Apennines, all the way to the opposite summit, at 1,700 meters, the peak of Mount Lesima.

What wines are made in Oltrepò Pavese?

We are on the 45th parallel, the line which boasts the most important wine production regions in the world. There is Italy’s Piedmont with Barolo, France’s Bordeaux and Burgundy and, if we go to the new world, even California’s Napa Valley. We are in Oltrepò. Here wine has been produced for 2500 years, since the times of the Etruscans, having both the right soil and climate. Yet in the last 50 years, this territory has never been featured in the media for its production of quality wine, maybe because many grape varieties have found a home here but nothing has emerged as a main actor. Until now.

In the hills of Casteggio, 20 producers together with the consortium gathered for the first edition of "Oltrepò, land of Pinot Nero. One land, one grape variety, two excellences." The aim of this event is to shed a different light on this region that up until now has been considered the gigantic anonymous vineyard of Italy. The goal? To represent this land for what it has become: its own wine region with its own identity. The new Oltrepò presents itself as the Land of Pinot Noir. It does not want to hide the other grape varieties and wine appellations, but rather to give everyone a chance.

Another time we will talk about Buttafuoco, Buttafuoco Storico, Bonarda, Barbera, Uva Rara, Vespolina and Croatina, but for the moment let's focus on Pinot Noir. "This grape variety is the key to understanding, and can represent the common denominator of, the territory,” says Carlo Veronese, director of the consortium for the protection of Oltrepò Pavese wines. “Here Pinot Noir is one grape that turns into three, or rather four wines: it is vinified in red, classic method, rosé and white." A true protagonist of this beautiful land about which not enough is said. Here the vineyards alternate with parish churches with high bell towers and fairy-tale castles that in autumn or spring, when the fog romantically rolls in, seem to be suspended between the valleys. Whoever ventures to visit the many wineries will be undoubtedly seduced by these valleys, sometimes sinuous, soft and round and sometimes steep and impervious. In some vineyards there is almost a 45° angle, which is practically a vertical slope which seems straight out of an Escher painting.

This is a land of borders and contrasts, touched by the icy winds of the Arctic and by the warm winds of Africa where, starting from the first hill between 150 and 300 meters (500 and 600 feet), because of thermal inversion, we find coolness in summertime, with at least 5 degrees less than in plain, and a mild area in wintertime with at least 5 degrees more. This is a land where producers have not replanted vines according to the whims of a fickle market but have instead understood the relationships between the different soils and the many grape varieties. This spirit has made it possible that today in the best location there is the largest and most important district of the largest and most difficult grape variety: Pinot Noir. In Oltrepò, 75% of the national production is grown. With its 3,000 hectares of Pinot Noir, Oltrepò is one of the largest vineyards of this variety obviously after Champagne with more than 13,000 hectares and Bourgogne with 11,000. The same opinion is shared by Alessandra Piubello, journalist and conductor of the masterclass about the classic method made in Oltrepò, always with Pinot Noir, who underlines how "this territory is producing an always more refined classic method."

Are you ready to depart for Oltrepò? 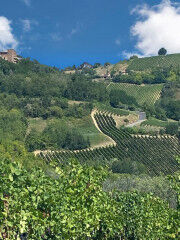 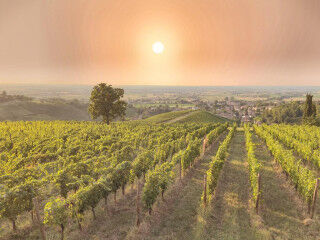